Total War: WARHAMMER>  Workshop > bennymclennan's Workshop
This item has been removed from the community because it violates Steam Community & Content Guidelines. It is only visible to you. If you believe your item has been removed by mistake, please contact Steam Support.
This item is incompatible with Total War: WARHAMMER. Please see the instructions page for reasons why this item might not work within Total War: WARHAMMER.
Current visibility: Hidden
This item will only be visible to you, admins, and anyone marked as a creator.
Current visibility: Friends-only
This item will only be visible in searches to you, your friends, and admins. 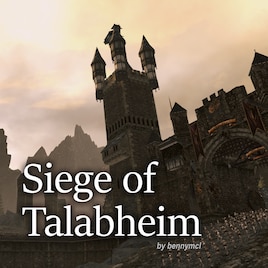 bennymclennan
Offline
See all 272 collections (some may be hidden)

This item has been added to your Subscriptions. Some games will require you to relaunch them before the item will be downloaded.
Description
UPDATE
- Friday February 10th
-----

I have added the following to the map
- one large deployment zone for each side
- AI hints - It does help a bit, but this map is sadly not great for AI right now. If I could get some AI scripting tool sit would be great, but not now...
- Added a back section fort for artillery
- Added a back section city block with open spaces for battling
- Added aesthetic bridges and waterfalls
- Removed some forests and added more street sections
- Added a large mage tower for eye candy and tactical pillar in the middle of an open space
- Added some short walls to the left flank opening for looks and slight tactics
- Added some new hills and different elevations all over the place.

Get ready for some truly large scale siege defense!

What we have here is my first attempt at map editing. I was always kind of disappointed that the sieges in Warhammer were not representative of their actual lore and so I tried making this map to reflect Talabheim slightly more than it is in the current game. There are, of course, tons of things missing from how Talabheim actually is built and the crater is technically much too small, but I think the spirit of the map is right! (I physically couldn't make the map any bigger!)

These guys have great channels and provide really solid Total War content. Check them out and subscribe if you get a chance!

Jackie Fish's battle between himself and Lionheartx10! Beastmen vs Empire
https://www.youtube.com/watch?v=jqR5jUJJ1Uw

Talabheim has forever been the eye of a tempest- the tranquil city lies in a crater, naturally shielded from the perils of the Great Forest. However, the Eye of the Forest has never been so horrified by what it now sees surrounding it. Nor have its rock walls been so shaken by the clankings and stompings of such an iron host. With the city now under assault, there is only one certainty to Talabheim’s fate: Khorne will fantasize of bathing in the bloodshot eye when all is said and done! Needless to say, the defenders of Talabheim have many advantages. For example, their northern-most gate could probably stave off any army in the old world. However, the attackers are blessed with two other entrances into the city, both of which are weaker choke points. Choke points aren't everything to this map though: Talabheim itself is riddled with ambush locations and hilltops to defend. This siege map rewards both gall and craftiness, so you must employ both to win.

So, a regular pitch battle will likely not be effective. The AI will likely not be very good at this map - at all. Hence, you should probably try playing this with a few other people in a "role play" type of manner to make sure you optimise for the most fun! There are 3 entrance ways into the city with varying hill elevations and city streets to fight in.

I believe a 3v2, 3v3, or 2v2 in favour of the attackers will provide some interesting results!

I am open to ALL suggestions for improving the map. As you can see, the back part has a larger forest which I could easily turn into something else if there is a good suggestion for it... perhaps another for in the back with more elevation? Who knows! Please suggest and I will think about adding them!

bennymclennan  [author] Aug 29, 2017 @ 5:50am
Hi there guys. Yes, I know it needs an update but I have been travelling for 2 months and I am still on my laptop... as soon as my desktop is shipped to me (I moved back to Korea) I will update the map to work for sieges.

Istar Aug 18, 2017 @ 3:55pm
thank you for the mod, great job, but I have a problem, in the campaign the AI create siege tower, and turn aroud the city for all the time of the battle with out attiacking.

bennymclennan  [author] May 28, 2017 @ 8:40am
I am currently in the middle of updating this map for massive 4v4 AI friendly battles. The entire city is getting a face light with new walls and towers, defensible positions. It's going to be massive and oh so much fun :).

Frostbeard Apr 8, 2017 @ 2:13pm
@Benny, No worries ;) Good Luck with the move and keep up the GREAT work! Also neen enjoying watching you and Indypride battle on MP, especially when you beat him, Empire v Chaos on Steel, Faith and Gunpowder mod :p
< >