Store Page
Garry's Mod>  Workshop > Phoenix's Workshop
This item has been removed from the community because it violates Steam Community & Content Guidelines. It is only visible to you. If you believe your item has been removed by mistake, please contact Steam Support.
This item is incompatible with Garry's Mod. Please see the instructions page for reasons why this item might not work within Garry's Mod.
Current visibility: Hidden
This item will only be visible to you, admins, and anyone marked as a creator.
Current visibility: Friends-only
This item will only be visible in searches to you, your friends, and admins. 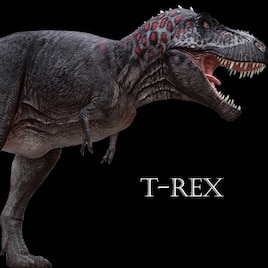 Phoenix
Online
See all 803 collections (some may be hidden)

This item has been added to your Subscriptions. Some games will require you to relaunch them before the item will be downloaded.
Description
This is the 'special' Tyrannosaurus Rex (T-Rex for short) from The Isle; an open-world dino survival game where players choose from three factions in an attempt to survive a fierce island. Hunt. Prey. Survive. You can find the game here: http://store.steampowered.com/app/376210/ (still in early access).
This model comes from The Stomping Land, a game which has been abandoned by its developers.