Store Page
Kenshi >  Workshop > Squamousness's Workshop
This item has been removed from the community because it violates Steam Community & Content Guidelines. It is only visible to you. If you believe your item has been removed by mistake, please contact Steam Support.
This item is incompatible with Kenshi. Please see the instructions page for reasons why this item might not work within Kenshi.
Current visibility: Hidden
This item will only be visible to you, admins, and anyone marked as a creator.
Current visibility: Friends-only
This item will only be visible in searches to you, your friends, and admins. 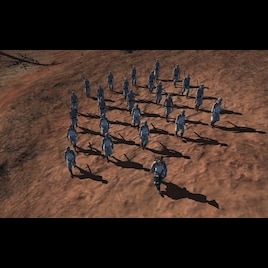 Squamousness
Online
See all 8 collections (some may be hidden)

This item has been added to your Subscriptions. Some games will require you to relaunch them before the item will be downloaded.
Description
NOTICE: Given I've been completely inactive for years this may be obvious, but I am completely done with Kenshi modding. All of my mods are up for grabs to improve or use the assets of if you feel so inclined. I am not an artist or an animator and lack the talent or interest to continue to work on Kenshi projects. My apologies.
----------------
The Fellowship of Eralt have a long and storied history of glorious conflict and chivalrous virtue. Or, so they say. The truth is about twenty years ago a small fleet washed up on the shores of the continent, with the survivors claiming to have been explorers in the service of a distant land known as the Kingdom of Eralt. With no way back, these strange foreigners have acclimated to this land and seek to carve out a new legacy in the name of their distant country (and make a decent profit along the way.)
______
The flag of the Fellowship of Eralt is a yellow sun rising out of light blue waters into a white sky.
------------
The Fellowship of Eralt is a highly skilled mercenary company of heavily armored warriors, specialized in the slaying of dangerous beasts, villainous bandits, and ambitious warlords. In addition, they can be seen flying their flag alongside whichever kingdom sees fit to employ them during a war against a rival. For as long as their employer can tolerate them, anyway. You see, the Fellowship adheres to a strange and seemingly arbitrary moral code, brought with them from their faraway homeland. This code condemns slavery, cowardice, treachery, underhanded tactics, torture, ill treatment of captured prisoners, or attacking the defenceless. They have even been known to walk up to the bandit camp they have been ordered to rout, in broad daylight no less, and issue a formal challenge, forgoing the element of surprise in favor of an "honorable" duel. In addition, captured foes who surrender are indeed spared, and are either given the option of returning with the Fellowship to their vast tent city to work as servants (paid servants no less) or to be escorted to the prisons of whoever the Fellowship has been hired by. Many choose the former.

As you can imagine, this seemingly illogical code of honor has perplexed the ruthless and pragmatic warlords of our homeland, and many are hesitant to pay for a mercenary company that is unwilling to do dirty work and shows mercy to its foes. This has caused the Fellowship to find itself running low on funds very often, which in turn leads to it having a much lower number of troops than most other companies. That said, they can still prove to be a formidable force, as each steel-clad soldier is highly trained and well equipped.
--------------------------
These are the classes of Eralt soldier one may find. Unlike other companies, they all generally play the same role, that of the heavily armored vanguard, charging into enemies and breaking their line of battle while the masses of regular soldiers take and hold ground behind them. The difference lies not in role, but in level of skill.

The squire is the first rank. Equipped with chainmail and a sturdy metal plank, these soldiers form the bulk of the Fellowship. Even as rank and file, squires are still a step above average soldiers of their rank, and can easily hold their own against an enemy charge. Squires generally spend their first few years of service in constant training before seeing deployment, as the Fellowship's low numbers mean that every soldier counts. They typically wield heavy polearms.

The Knight forms the backbone of the Fellowship. Equipped with chainmail in addition to plated armor similar to the Holy Nation, along with a long cleaver, they are a force to be reckoned with, and easily outclass the professional soldiers of many lands, much to the consternation of said nations. While usually deployed in groups, one may see a Knight leading a small group of squires by himself, should the mission be relatively trivial. All knights, upon induction, begin to recieve basic leadership and tactics training. This way, the unit can function even if officers are incapacitated.

At the head of large Fellowship units, one may find the most skilled members of the company, the Marshals. While some may take amusement from their strange and extravagant armor, a combination of aesthetics from their homeland and ours, they quickly stop laughing when they see one in battle. Marshals are small armies unto themselves, leading from the front wielding the finest blades one can forge. In addition to their martial prowess, they posess a finely honed tactical mind, chosen from among the most promising Knight commanders.
-----
Trivia:

The Fellowship is controlled by a democratic committee of Marshals, with each one having an equal vote, and all are bound together by their code. That said, the Fellowship is not a true democracy, as only Marshals have the ability to vote.

The Fellowship of Eralt may not snag any long term contracts due to their code of honor weighing them down, but they have often been bought to serve in individual campaigns or battles. They are most often deployed as an auxiliary force to be used along with the main army during pitched battle. In addition, they are also occaisionally employed by villages to deal with bandits or a troublesome pack of animals. These types of contracts keep the Fellowship afloat, most of the time.

As stated earlier, the Fellowship are known to have a large tent city somewhere on the southern coast, although few know exactly where. Some say that if they become self-sufficient enough, they intend to become an independent city-state.

The Eralt people seem to worship a vast pantheon consisting of thousands of deities representing forces of nature and physical locations of great significance. Little else is known about their religion. On a related note, there are confirmed instances of Eralt migrants adopting local beliefs. Its believed they consider the religions of our continent to simply be an extension of their own vast mythology, preventing any sort of internal schism from occuring.
--------------
Things I want to do later:

-If the Fellowship gains enough funds, they declare themselves an independent faction.

-Give the player the ability to build a structure that allows them to recruit Fellowship soldiers if they can afford it and have a good standing with the faction.
If you like this mod, feel free to check out others like it, such as Yolei's Marauders and the Rukori Group.
< >
12 Comments

Squamousness  [author] Nov 5, 2018 @ 4:22pm
I'll be waiting for when Kenshi is all ironed out probably, currently busy with college stuff.

Squamousness  [author] Oct 2, 2018 @ 9:38am
I'll eventually do an overhaul and fix these issues, I'm just busy with college right now.

jojobe Sep 30, 2018 @ 2:39pm
Its a good mod i just wish their were more of them. I lost 8 of them to canibals. RIP! you have to have farmer and such which lead to a smaller exploraton party.

jojobe Sep 29, 2018 @ 12:26pm
this group has no money or supplies or packs. A group of 50 so you seem like a real outfit and can take some deaths would be good. I would like more troops than money.

Devils Paladin Apr 21, 2017 @ 3:24pm
Good mod, Only suggestion is maybe give them food or supplies for a small encampment.