Store Page
Tabletop Simulator>  Workshop > Zdenek's Workshop
This item has been removed from the community because it violates Steam Community & Content Guidelines. It is only visible to you. If you believe your item has been removed by mistake, please contact Steam Support.
This item is incompatible with Tabletop Simulator. Please see the instructions page for reasons why this item might not work within Tabletop Simulator.
Current visibility: Hidden
This item will only be visible to you, admins, and anyone marked as a creator.
Current visibility: Friends-only
This item will only be visible in searches to you, your friends, and admins. 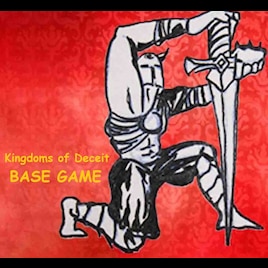 Zdenek
Offline
See all 18 collections (some may be hidden)

This item has been added to your Subscriptions. Some games will require you to relaunch them before the item will be downloaded.
Description
join the Kingdoms of Deceit playtester community here: https://s.team/chat/A5CydfE8


KINGDOMS OF DECEIT
KOD is an epic battle of powerful Kingdoms. In this game you start with a hand of adventurers who shall help you achieve the main objective of the game - to collect 15 experience points.

In Kingdoms of Deceit, you control up to 3 characters and so do your opponents. All players crave glory but only one can get it and that is why each player is on their own against everyone else. There are plenty of ways to play the game and it is up to you choose which paths you take. Will you rush out into the world to complete quests or will you be more diligent in your studies before venturing forth into the unknown? Will you have no mercy spilling blood and preying on the weak, or will you form alliances and economic pacts? Will you be deceitful or will you choose to play honestly? Only you are the true master of your own destiny. No two games of KoD are alike. At first, you will probably be dazzled by the freedom you have at your disposal in this game, but before you know it, you may find yourself discovering your own unique strategy.

On your turn, you may perform a number of actions ranging from: buying items, attacking others, stealing from others, fighting monsters, casting spells, completing quests, gaining gold, poisoning others, and seducing others. Lying is its own reward. If you dare, you may take actions of characters you do not have in your hand. Anyone can call you out on your bluff, though, in which case you will be forced to kill one of your own characters out of shame. Lastly, the higher level you are, the stronger most of the actions will be, but the more you become a target.


HOW TO PLAY (TUTORIAL):
https://youtu.be/3DUJhAVfDOQ


Join the playtester community steam chat to join us for games:
https://s.team/chat/A5CydfE8


EXPANDED VERSION:
There is an expanded version with a lot of new items, quests, spells, arcane spells, ruler abilities, but mainly "6 more characters" (Necromancer, Paladin, Witch, Scholar, Alchemist, Prince, Innkeeper, and Beggar. In order to download the frequently updated expanded game, you need to add me as a friend on Steam and ask me for it for ask me through the KOD steam chat mentioned above.


DISCLAIMER:
Despite the fact I created the whole game, a few images such as the graveyard background and about 10 percent of items are taken from Google Images but I have an artist (Chef Rude US) who is gradually replacing the placeholder art for an original one. Shoutout to anyone who has helped with the previous art: Dasha, Sandgirl, DarkLordJimmy, Kelo, Nettleflap
Popular Discussions View All (1)

LionesseRampant Apr 28 @ 2:56pm
Was just introduced to this game a few days ago and I've had a lot of fun with it! The creator is very receptive to questions and suggestions. I plan on introducing the game to my friends in the near future.

Mellester  [author] Feb 21, 2019 @ 12:47pm
Tyrant you where correct about the fact it was a porting problem.
I did not account for they fact there where less seated players in this version