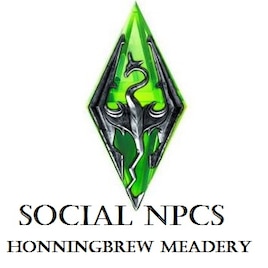 TheDarkRyze
Offline
See all 175 collections (some may be hidden)

This item has been added to your Subscriptions. Some games will require you to relaunch them before the item will be downloaded.
Description
This mod is focused on improving NPC (Non-playable-character) to NPC interaction and Player to NPC interaction.

This mod is also available on nexus mods: http://www.nexusmods.com/skyrim/mods/77792/

You need to run this with SKSE to work properly!!

The social model used is implemented in NPCs in two locations near Whiterun :
- The Honningbrew Meadery
- In a new house called "Comme il Faut House"

If you want to learn about what I've been doing here:

Did you ever want to play The Sims in Skyrim? Well, you can't, but this mod is pretty cool:

In short: NPCs in the mentioned locations use social interactions (quests) such as flirting, complimenting, insulting, embarrassing (etc) to interact with each other.
They try pursue romantic partners and insult those who they feel disgusted by. They try to make friends and introduce themselves to those that do not know them.
The best part is that YOU can insult them too! Or flirt with them, or ask them to marry you, you choose!

Manipulate them, destroy their relationships or help them build one, or just wait and see what the end result will be without interfering.

This mod is my Master's Thesis project. The goal is to investigate if social characters can automatically create interesting stories that players want to interact with .
To do this we decided to implement a social architecture model, the "Comme il Faut" in Skyrim and check if it was possible and if people are interested or not.
The "Comme il Faut" model is described in the chapter 43 in the book : "Game AI Pro 2: Collected Wisdom of Game AI Professionals", link: http://www.gameaipro.com/

As it was previously mentioned, these NPCs determine what relations they want with others keeping in mind their race, sex, sexual orientation and attractiveness. Afterwards try to reach their goal, this goal might be marriage, dating, being allies or becoming enemies.

NPCs can perform up to 10 different social actions to reach their goals such as flirting, complimenting, offering gifts, insulting, etc....

Each social action is a quest that is launched by each NPC in order to reach their goal.

The Player may also perform most of those interactions

This architecture is dynamic meaning that it is prepared to take into account most NPCs in the world.

Not only can you explore both locations as you can create your own social NPCs quite simply.

You need to use Creation Kit though!

Grab an NPC to your liking (make sure he uses the voice types mentioned below)
1) Attach the scripts: “CIFRPG20” and “CIFRPGInitiatorRules”
2) Add the keyword: “cifrpg”
3) Add other keywords to your liking (“cif_t_attractive”, “cif_t_ugly” etc...)
4) Place the NPCs where you want
5) Make sure their voice type is allowed
6) Update the ChangeLocationEventNode to start the “SocialMovePlayerDialogue” when the player enter the location where you put the NPC
7) Save and Play

NPCs only interact with NPCs that have the “cifrpg” keyword

Make sure that the NPC you want to use has one of these Voice Types:
Voice Types supported:

Currently there is no voice acting in the mod as it requires 156 lines of dialogue per Voice Type and I haven't found time to record it. I was more interested in guaranteeing functionality before anything else, however, if there is a high level of interest I will try to do it.

There might be some bugs although I've play-tested it a lot, feel free to communicate them and I will try to fix them as soon as I can.

If you have logging enabled this mod will use it to create a data log on what social exchanges where used and what is going on with each script.

Additionally sorry for the size of this thing the problem is mostly the voice files that are huge despite only being silence.

I also plan to add voice acting as I mentioned. The only problem is the number of lines of dialogue in this mod, it is about 150 lines per voice type.

- the SKSE team
- the folks at https://www.reddit.com/r/skyrimmods

victoe Oct 8, 2018 @ 6:55am
Can you have children in this thing because idont wantna little midget following me

METROID May 9, 2018 @ 1:16pm
Planning an release for Skyrim Special Edition ? the Skyrim SE Script Extender is released now would love to play with this on 64 bit version :)

kackwurst8000 Aug 10, 2017 @ 7:57am
No, nothing updated. Apparently it could be some issue with how Steam installs mod on the Special Edition. But I haven't found a solution.

TheDarkRyze  [author] Aug 8, 2017 @ 4:48am
@Thundrakar When they release Skyrim Script Extender for the Special Edition I could port it, but I'm not sure when will that happen