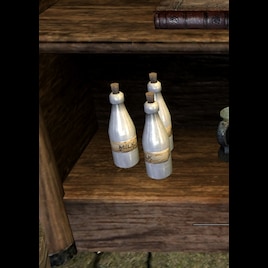 CaptainRC
Offline
See all 327 collections (some may be hidden)

This item has been added to your Subscriptions. Some games will require you to relaunch them before the item will be downloaded.
Description
Are you a non-Nord wandering around a frozen country filled with tall people who like to spend their days fighting, singing, starting civil wars, griping about religious figure hating elves and the Empires who were forced into a treaty with them... and drinking so much %#@!ing alcohol you can practically hear their brain cells screaming in agony before their deaths?

Are you tired of wandering around needing something to drink that doesn't have any negative effects other than those healing potions you've been stocking up for when you need them?

Have you sworn off booze forever because the last time you got drunk, you staggered into an Imperial ambush and woke up in a cart with a rebel Jarl on his way to get beheaded, only to get attacked by a big %#@!ing black dragon?!

Are you a Khajiit? 'Nuff said.

Well then, this is the mod for you!


I made this because I'm clean and sober in real life and my hatred of alcohol borders on the psychotic. And yet, there is NOTHING else to drink in Skyrim... ANYWHERE! (Well, at least until Hearthfire was released.)

So I made this mod... I prefer the Dragonborn clean and sober. After all, you'd figure that you wouldn't want to see a person who can shout shockwaves, fire, frost, and whatever else getting drunk. He might wind up wrecking the place! Imagine having to explain THAT to the guards.

So, now, if you look behind the counter of every inn, you'll find that, despite their professing intolerence for anyone who drinks the wholesome drink that strengthens bones and teeth, they keep a small supply all ready to be sold... just in case.

And as an added laugh, I've placed some milk bottles in the houses that you can purchase and in certain other areas around Skyrim... and another place you would DEFINITELY not expect to find milk. Not to mention the dreaded SECRET BARREL OF SHAME!!! If you look around carefully, you might find out that someone just might be a closet milk drinker. The horror... THE HORROR!

AND... you will also get the satisfaction that if any of those knuckle dragging Nords calls you a milk drinker, you can say: "That's right! I drink milk all the time! 'Cause I'm the (insert appropriate expletive here) Dragonborn! Got a problem with that? FUS RO DAH!!!"

LATEST UPDATE!!! (Had to clear the update list. This description's getting too long.)

I have now added Tomato Juice to the juice list and the ability for everyone to make their juices at any cooking pot. In order to make it though, you will need three of the fruit or veggie and also WATER, which I made available at any alchemist store. I made it an ingredient before, but when I tried to drink it, it crashed the game, so I made it a food item and now it works.

And... as a special bonus... I made SNOWBERRY MILK!!! However, you CAN'T buy or loot this one... you have to make it yourself. Simple enough... go to any cooking pot with a bottle of milk and some snowberries, and your done. However, the effect of the snowberries get dilluted in the milk, so you only get a small health boost and a little fire resistance.

BTW, you might notice when you are making your juices, that Apple Juice is listed twice. Reason for that is that there are actually two kinds of apples, red and green. So I made it possible to make apple juice using either.

FINAL UPDATE!!! This will be my final version of this mod. I've noticed that ever since I introduced the juices, the milk had been coming up less frequently in the inns, so I reworked the mod a bit and now it comes up more often. The water is once again available only at the alchemist stores because I reasoned that noone goes to a inn's bar to drink water. And I've added one little extra tidbit... CHEESE! Now you can make your milk into cheese at any cookpot. One bottle makes a slice, three a sliced wheel, and five makes the whole wheel. I've also renamed the Secret Barrels of Shame into Milk Barrels... however, I did keep two of the Secret Barrels in the game and placed them where they should have the most comic effect... at least, that's the idea.

I've enjoyed working on this mod and taking in some of the requests. I hope that I've created a lore friendly mod that works well within the story of the game. And because I wanted the mod to be lore friendly, there were a few requests I couldn't take:

Chocolate Milk... as much as I love it, myself, unfortunately Skyrim doesn't seem to have even heard of chocolate, so I'm afraid that was impossible. This is why I created the Snowberry Milk. However, to keep it more lore friendly, I made it craftable only.

Tea... possible, but I couldn't see any ingredients other than Nirnroot that could make a viable tea.

Other fruit juices... once again, to maintain lore friendliness, I had to stick to the fruits and veggies available in Skyrim.

Soda... someone actually requested this. LOL! Sorry, but as several commenters have pointed out... the people of Skyrim probably haven't heard of pasturizing their milk... so how could they even know about carbonization?

Thank you to everyone who has subscribed and enjoys this mod. To be honest, I never expected it to reach the level of popularity that it did. And for that, I have to thank you again.

One last note, people have been saying the carrot juice can sometimes causes permanent nighteye. The fix for that is to just drink another carrot juice. I'm guessing that this is yet another in-game bug that's rearing its head.

LATEST UPDATE: OK... OK!!!! YOU TWISTED MY ARM!!!!!! I've updated for Hearthfire. Now all Hearthfire recipes that require the milk jug can now also be crafted with the bottled milk, too. You also can make the milk into butter.

RETRACTION: I reverted this back to the vanilla version. The Hearthfire version is now a seperate mod. Those with Hearthfire might want to upgrade to that mod.

#CatLady Jun 26, 2019 @ 3:55am
love - love - love this many thanks just a hope if you can make water more available I used to see it in barrels that refilled from lots now I haven't seen them much at all bar Whiterun and need more water as most alchemist don't sell... sorry to moan thanks for hearthfire option cheers to you Dragonborn.

christina.riter81 Jul 28, 2018 @ 4:34pm
I hope I'm not coming off as rude or anything but according to a couple of pieces of lore there is such a thing as Nord chocolate. Babette mentions her victim offering to buy her some at the gathering if you listen to her when the Dark Brotherhood members are discussing their contracts.

Roscius Jun 27, 2018 @ 3:02pm
I was not interested in this mod but saw the description preview and after reading it I am subbing to the mod cause I love you

Bersaglieri Apr 7, 2018 @ 1:16pm
I'll keep my Ale tyvm. Not a Lager fan but Ale is a must in my life. Like it nice and hoppy! Troegs Nugget Nectar ftw! Never tried mead but always was curious about it.

ZoomBlue213 Jan 12, 2018 @ 9:25pm
Thank you so much! I hate roleplaying a non nord character and having to get booze because thats all they have. How do people In skyrim even get hydrated? This adds immerison and I love this mod.