Store Page
Tabletop Simulator>  Workshop > Alice's Workshop
This item has been removed from the community because it violates Steam Community & Content Guidelines. It is only visible to you. If you believe your item has been removed by mistake, please contact Steam Support.
This item is incompatible with Tabletop Simulator. Please see the instructions page for reasons why this item might not work within Tabletop Simulator.
Current visibility: Hidden
This item will only be visible to you, admins, and anyone marked as a creator.
Current visibility: Friends-only
This item will only be visible in searches to you, your friends, and admins. 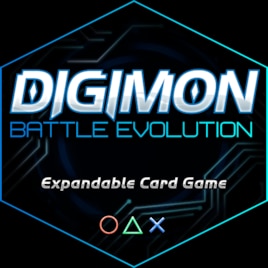 Alice
Offline
See all 29 collections (some may be hidden)

This item has been added to your Subscriptions. Some games will require you to relaunch them before the item will be downloaded.
Description
Digimon Battle Evolution is a fan-made Digimon card game for two players. It is based on the Playstation 1 title "Digimon World: Digital Card Battles" with several changed and updated rules, many altered cards (plus new cards) and completely new game features and concepts. Pick a powerful partner Digimon that easily evolves. Play a deck containing any of eight types of Digimon, or mix-and-match types.

Each player will send out their Digimon, evolve, and support them with their own cards. The Digimon battle until one player achieves 4 KOs! Digimon Battle Evolution is an Expandable Card Game, (ECG) and is free for life. Several expansion sets are currently released, with more planned.

This module comes with a two-player setup ready to go. One side will take control of the partner Agumon and the Dragon's Rage deck. It fights ferociously, showing no mercy with increased power. The other side will partner with Gabumon and the Nature's Howl deck. It fights tactically, trying to keep its health up and win a war of attrition. These decks are tested and balanced against each other, while also serving as a jumping-off point for players to construct their own decks.

The TTS module uniquely has:
# The cards for construction are sorted by type and are fully searchable!

DREAMBOX Feb 7, 2018 @ 5:56pm
What Zod said. Thanks for putting this together, it's ridiculously well made.

Alice  [author] Aug 29, 2017 @ 10:32pm
Dude, you rock. Thanks for the uplifting comment!
Print quality will hopefully be coming soon with 300 DPI. We're just working out our workflow and optimizing for 350 (and growing) cards. Plus balancing that with the workload of a new set. But I can guarantee if you arrange some properly scaled copies from https://v-mundi.com gallery into Microsoft Publisher and print @300dpi color laser, they're sexy. We have a whole set printed in laser.

Cheers, and look forward to our expansion projects

Vote 4 Zod Aug 21, 2017 @ 5:19pm
This is game is AMAZING! Great look, borrows from the fun PS1 system, and the new mechanics and rules work well; the Destiny system to replicate the Partner system and incorporate Megas is straight-up inspired. I only wish we had print-quality files for everything to make physical versions. It's not like Bandai/TOEI are gonna make another card game any time soon, and it definitely wouldn't be as good anyway.

Alice  [author] Oct 4, 2016 @ 4:16pm
@Hank Hill; thanks for the compliments. Indeed it was months and months of work designing, playtesting, errataing, and round and round for all the cards. I think there's at least a year of work into it thus far with more coming. Well I hope you get to play with friends soon!

Krobelux Oct 3, 2016 @ 3:27pm
This is fantastic. I haven't given it a try yet but you've put a lot of work into this and the Digimon Card Battle for PS1 is definitely one of the better card games for any video game. I'll give this a try when I get a chance! (currently working on a Digimon board game)