Store Page
Team Fortress 2 > Guides > Aoshi's Guides
This item has been removed from the community because it violates Steam Community & Content Guidelines. It is only visible to you. If you believe your item has been removed by mistake, please contact Steam Support.
This item is incompatible with Team Fortress 2. Please see the instructions page for reasons why this item might not work within Team Fortress 2.
Current visibility: Hidden
This item will only be visible to you, admins, and anyone marked as a creator.
Current visibility: Friends-only
This item will only be visible in searches to you, your friends, and admins.

ETF2L Match Guide
By Aoshi and 1 collaborators
A Guide explaining how matches within ETF2L run, and how you as a team leader should be handling your match media! If you have any questions or find some mistakes feel free to come and talk to us on our public discord server[discord.gg].

Comments
Preparations
Default Date
A default date is a date given to you by the ETF2L website or by a league admin depending on the cup/season. For the initial group stages of seasons and cups this mostly gets done by the website. This is based off of the 2 matched teams' prefered days.
These days can get set by war arrangers, deputies/buddies or leaders through the dashboard below the "My teams" page. Followed by pressing edit availability in the row of the appropriate team.

There you can select up to 3 possible days to play on.(These days range from what is set by the admin in charge.) You also have the option to give a preferred time and a time window.

The more days you enter the more likely the default date will be on one of the days you pick. If neither of the teams have entered any days on a match, there always comes a compromise. If team B has selected more days than team A has, then team B's choices are preferred more by the system. If both teams selected an equal amount of days and these don't match, a "neutral" day gets selected which neither of the teams picked.

Mercs or Ringers
All mercs have to be registered on ETF2L. To register a player in ETF2L they have to sign up to the site through the Steam log-in on the page. Signing up to ETF2L only requires an email address and an account in Steam to log in with. The use of email will be mentioned later in this guide.

Mercs or Ringers are players that are not rostered on the team they're playing for or they are unverified in the roster (This is if they joined less then 24 hours before). These players have to get accepted by the opponents leaders or deputies before being allowed to play. To avoid conflict we recommend you ask your opponents to state so on the match page. Once mercs have been approved the approval cannot be retracted again.

If your team needs a merc it is best to ask your opponents as soon as possible for approval so in the case he gets denied you still have the time to look for another player. One of the currently most used ways to get mercs is through the Merc'ed steam group.

Default mercs
Depending on the season or cup you may have default mercs if they are allowed for the competition. These are mercs that get accepted as long as they are not more skilled than the tier that you're playing in. These mercs still have to get presented to your opponent so they are aware that there is a merc. If they find that a player is too experienced you can contact an ETF2L admin[etf2l.org] and they will have a look at it.
Servers
Renting
To get a server to play your match on the current most popular way is through http://serveme.tf/. This service is free but the premium version offers more servers and allows you to rent further ahead of time. You can pay with ingame items or through paypal. Try to make sure that you and your opponent don't both get a server so that as many teams as possible can use the service.

If you're ready to rent a server you can use either the "Let's play!" or "I'm feeling lucky" buttons at the top of the page.The "Let's play!" button will give you a form in which you can fill in when you want your reservation to be, which password, whitelist, ...
The "I'm feeling lucky" button will reserve you a server for usage right away with the same settings as your previous reservation.

Commands
In-game you will possible have to change map, whitelist, config and whatnot. For this there are commands you can enter into the in-game console.
First up you'll have to log into the rcon, this will give you the right to execute the commands. Make sure that the rcon isn't the same as the normal server password or people can abuse possible commands!
Logging into the rcon can be done with the rcon_password command if you're on the server, for example:
rcon_password hello
If you're not connected yet to the server you can also add in the address and connect externally. Which is done with the rcon_address command, for example:
rcon_address serverip:port;rcon_password hello
If the server is rented from serveme.tf you can look at the rcon address and password there in the server details windows. 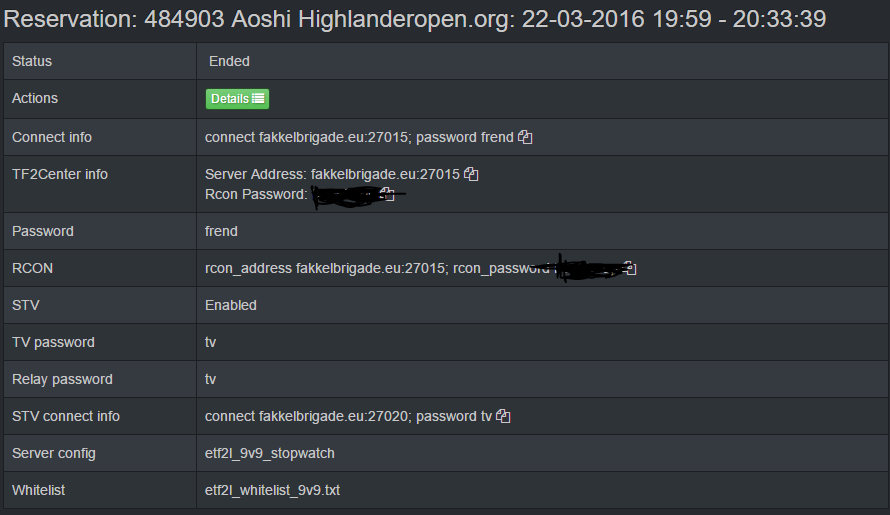 The following commands are the most used ones for the server administrator.
rcon changelevel pl_upward
This changes the map the server is currently running to the one entered in the command.
rcon exec etf2l_9v9_stopwatch
This will change the config that is currently executed. The full list of ETF2L configs can be found behind this link[etf2l.org].
rcon mp_switchteams
This command will switch the sides the teams are on. So lets say you just finished your first round and originally started attacking. After both sides ready-up again the teams will auto-switch and your team will automatically be on attack again. Seeing that this isn't supposed to happen you can switch the team after you've readied up and loaded with this command.

For a more extensive list you can look at this guide made by mercury[ozfortress.com].
Screenshots
For ETF2L you need 2 types of screenshots: status and scoreboard screenshots. These are both taken in-game. 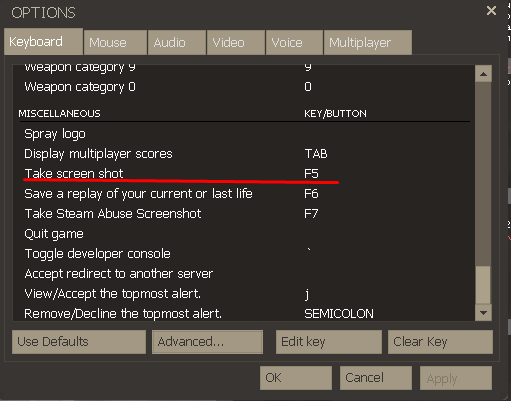 The easiest way to make these screenshots is through the in-game screenshot option. By default this is F5 but this can get edited to any key on you keyboard through the options menu. These screenshots will get saved in a path similar to "~\userdata\USERID\760\remote\440\screenshots" in your steam folder.

Status Screenshots
These are crucial to ETF2L. You make these by typing "status" in the console once everybody is on the server. After the command gives it output take a screenshot of that output and save it away for later. This screenshot will be necessary when reporting the results.

Here's an example of a status screenshot. 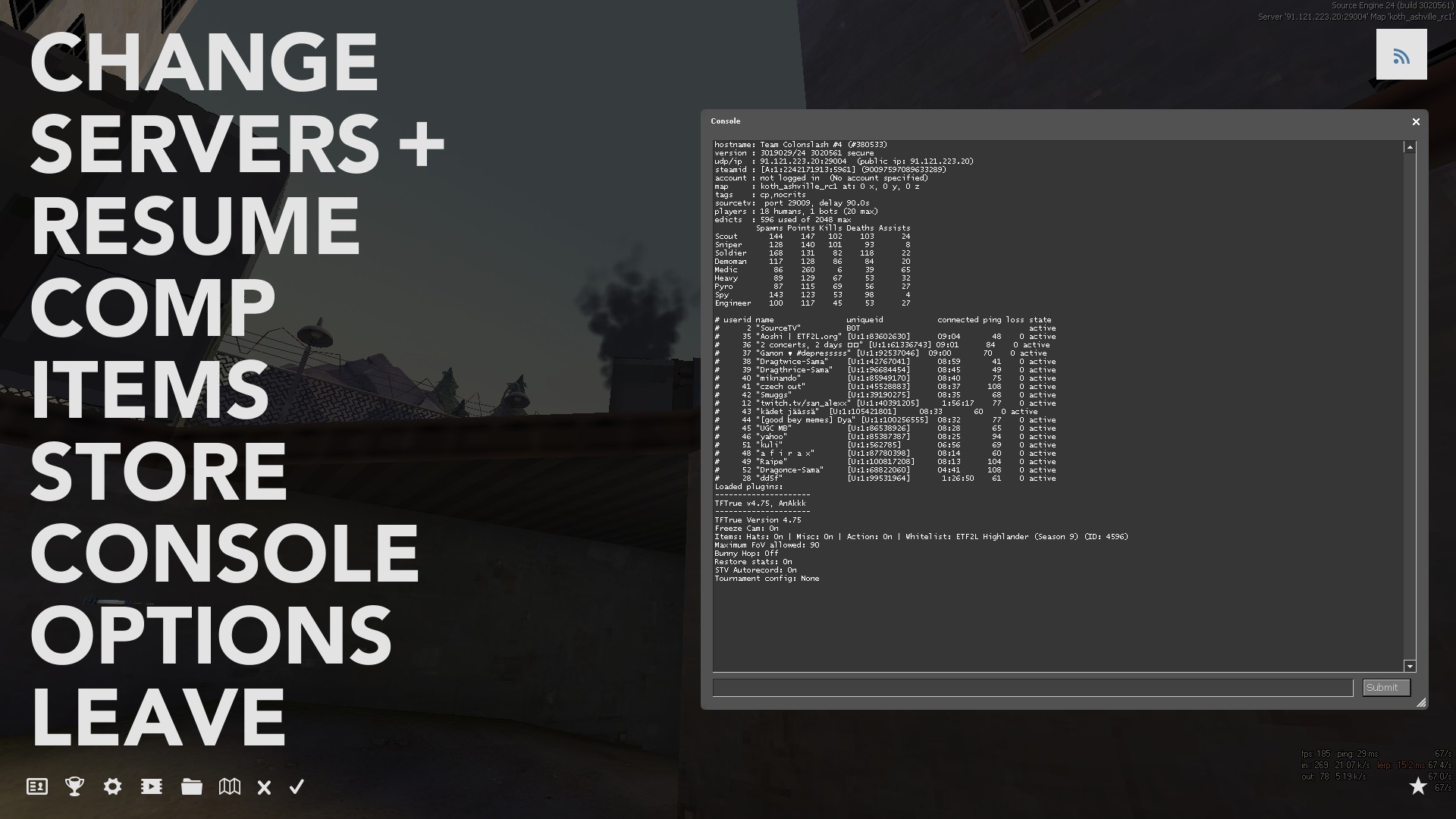 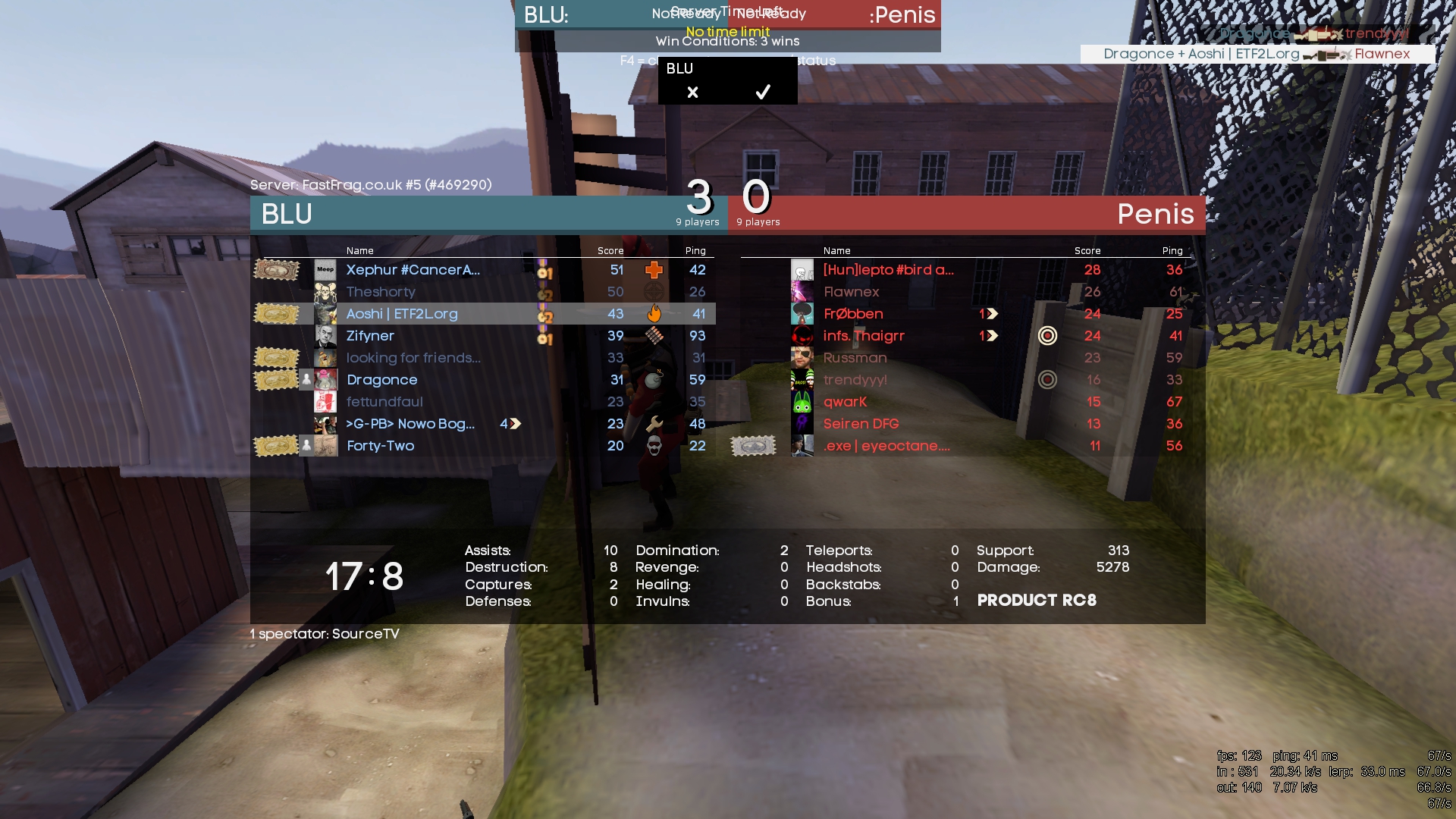 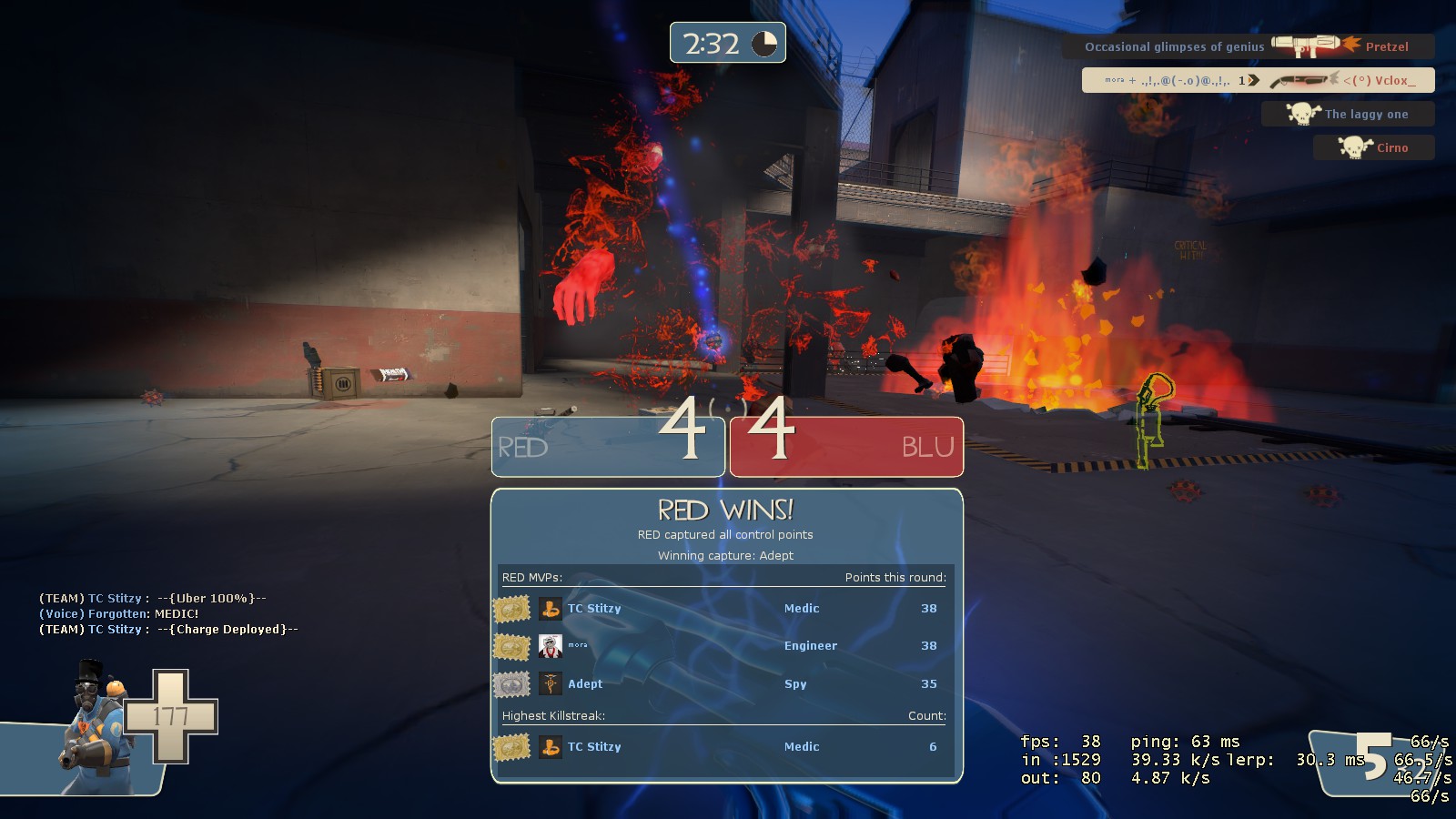 Demos
Recording POV demos of your official matches is mandatory. Every player on both teams has to record their perspective. Currently there are a lot of options for recording your perspective. The most commen way of doing this used to be P-REC[etf2l.org], but with the introduction of the in-game demo system having close to the same functionalities you can also use this. If you don't want to rely on an external feature you can use the record command, by putting "record demoname" in console. It will start recording the moment you enter the command and stop when you use use the command "stop" or leave the server.

Both P-REC and the ingame demo system will give a chat notification when they start recording. the record command will say that it started in the console. 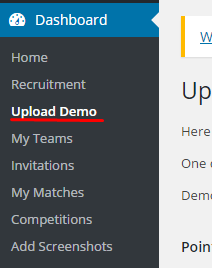 If requested by an opposing team or the ETF2L staff you'll be required to upload your demos. Team leaders should always get an email from ETF2L staff if a player from the match played is affected by the demo request. You must upload your demos through your dashboard; 3rd party sites are not accepted. After uploading they will be checked by an admin to see if the demo matches the official. Once the demo gets accepted they'll appear on the match page.

Requesting demos
Every team has the right to request up to two demos from any opposing player up to 48 hours after the match was scheduled to start. The admin team can request any amount of demos until the season/cup ends so you need to keep all your demos until the season is officially wrapped up.
Ingame Issues
Pauses
Pauses can happen due to many reasons. If you need a pause due to a reason tell your opponents in chat, make sure it isn't dead chat as dead chat can only be read by teammates. Once you request a pause give your opponents 15-20 seconds to pause or respond. In this way they can make sure they're not in the middle of a push or something similar.

If somebody has to reconnect during a pause the person connecting will get stuck on the "Sending Client Info" part of the connection process. Once the game gets un-paused the person will connect on through to the server.

Contacting an Admin
Contacting an admin in the middle of an official isn't the most optimal thing. During the evenings we usually do have 1-2 admins on stand-by but sometimes it can still take up to 10-15 minutes before we respond or resolve your scenario. So try avoiding this as this will just delay your game. Things like: Unapproved mercs, config issues, whitelist issues, ... will be things you'll have to talk to your opponents about. If you notice any of these things during a game try and work something out with your opponents and contact admins after the match if necessary. If you really can't get to an agreement you can contact an admin[etf2l.org].
Submitting the Results
If you entered the wrong results and need to get them changed then you will have to contact an admin[etf2l.org].

Once you've played your official it's time to report the result. Both participating teams are equally responsible for posting the results. At the top of the match page there will be a button where you can submit the results.
This brings up a page similar to the one on the following page. 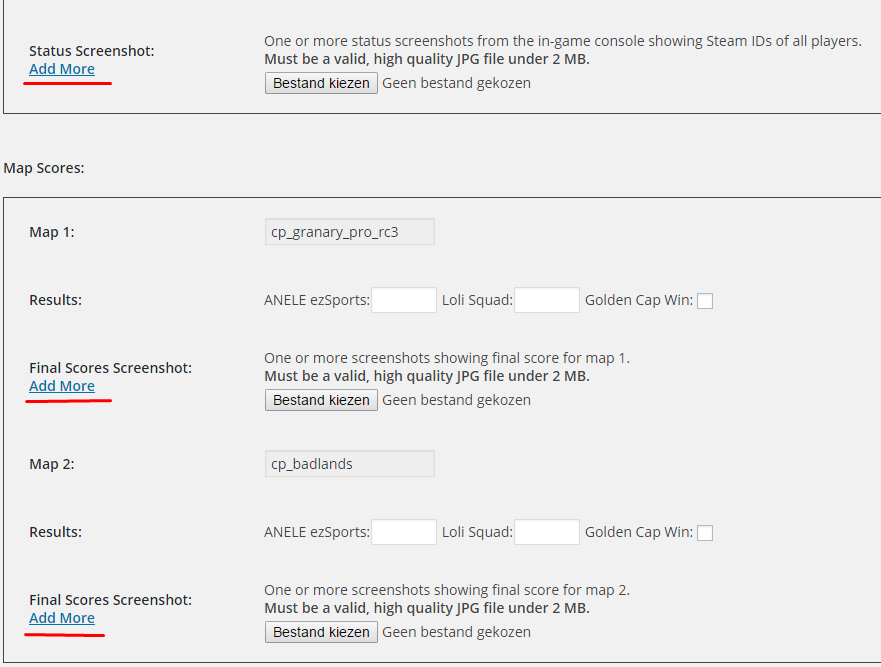 Here we will need to upload the screenshots we have taken together with entering the final scoreboard. In the case you have multiple status screenshots due to player changes during the official or multiple scoreboard screenshots due to a golden cap you can give the option to add additional screenshots by pressing the "Add More" button on the left. For the results itself you can enter them in the text boxes. 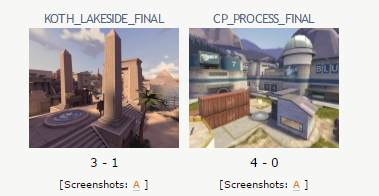 For 5CP or KOTH you need to enter the amount of rounds each team won. For Attack/Defense and Payload maps this is slightly different, entering who won the round is enough. In group stages these maps are often played BO3 meaning that you'll have to enter the results twice due to how the system works. Here are some examples of the result from BO3 payload games. 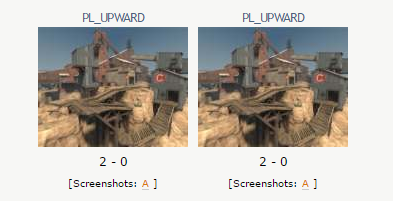 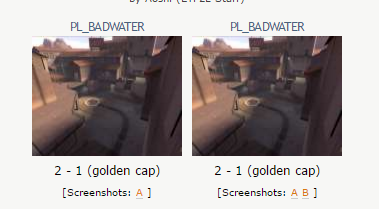 Uploading Screenshots Late
So you're missing one of the screenshots but you end up getting one from a team member. Now you want to add this screenshot to your match.To do this go to the Add Screenshots [etf2l.org] option, there you can add any screenshots that were still missing or necessary on a match page.