Using the names of your viewers

Controlling the game from a chat

Comments
Introduction
When playing Football, Tactics & Glory, the streamers can connect to Twitch. As a result, the viewers of the stream will be able to influence the game, helping the streamer to choose the actions or motivating the footballers on a pitch, and also can become part of the team themselves.

In this short video, you can view how the Twitch features work: https://youtu.be/r6YNi5SWnG4
How to connect
Start a new or load your old campaign.

In the menu, click on the Twitch icon to enable the possibility to interact with the viewers. 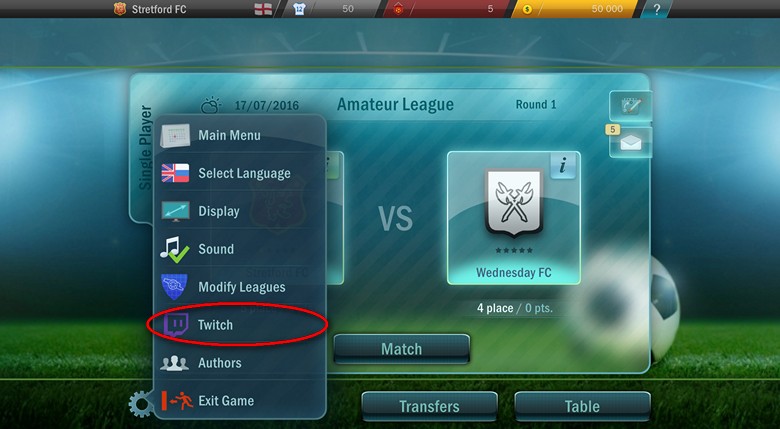 After that, the Twitch icon will appear near the Setting icon. 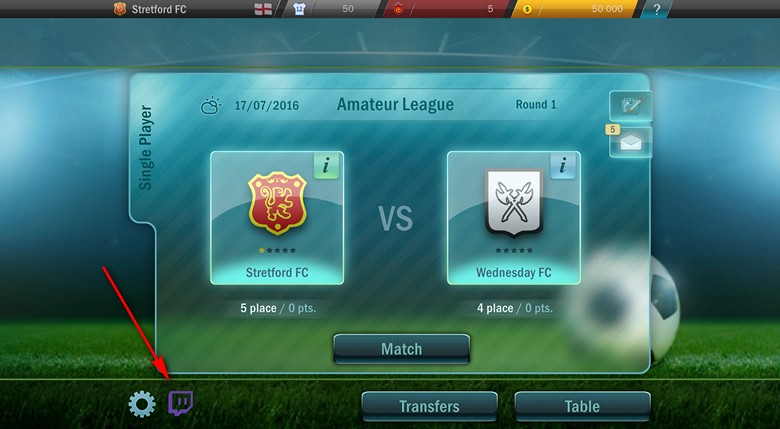 Click on this icon. The first tab will open, in which you have to log to Twitch. 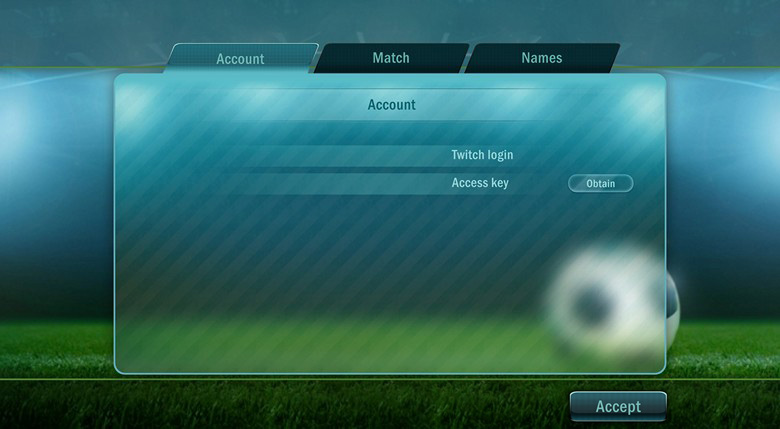 In the first field, enter your Twitch login. It should consist of all lowercase letters. To complete the inputting the text, press Enter on your keyboard or click the mouse anywhere on the screen.

In the second field, you should enter a special key. To obtain it, click on the button 'Obtain' which is right to the field. The browser will open a page where you need to log in to Twitch and allow the service to interact with Football Tactics. 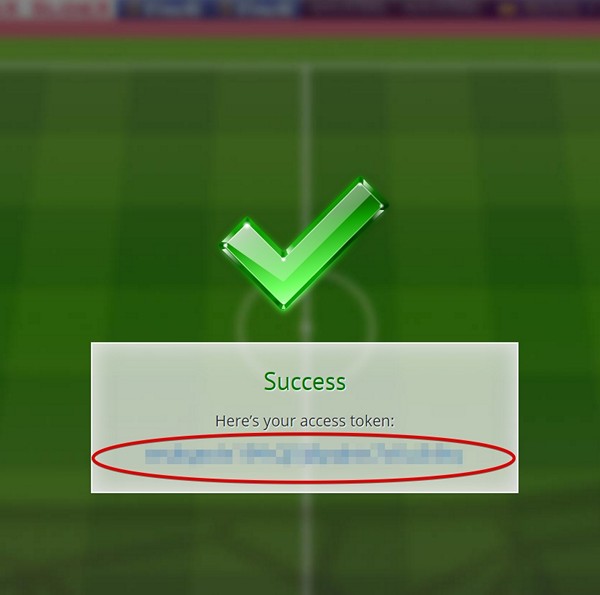 Copy and paste the blue code to the second field on the login screen in Football Tactics. Press Enter or click anywhere on the screen.

Now click 'Apply' button. In few seconds, the green check mark will appear. It means that you have successfully connected to Twitch. If it does not appear, it means that you entered an incorrect username or the wrong key. 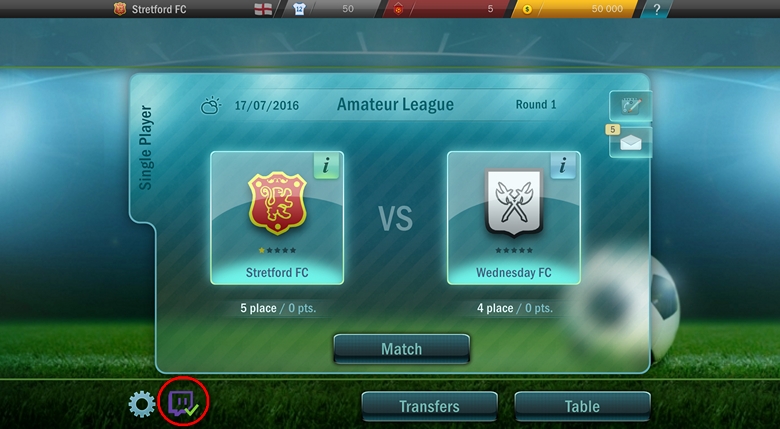 Using the names of your viewers
The game supports the following features:

In the settings you can assign and clear names manually. 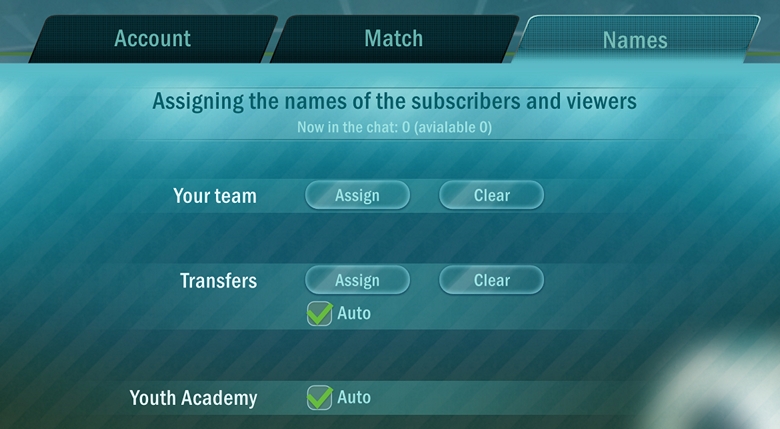 Renaming the players in the team
The first field refers to your team. At any time, when you decide that you want to name your footballers with the names of the viewers click 'Assign'. Usually, it makes sense to do it at the beginning of the campaign.

If you do not like how the game called the players, you can return to the basic names by pressing the 'Clear' button.

But if you want to change only a few names, go to the Team Management screen, click on a footballer and press the 'Info' button. On the screen which opens after that, you can give a new name to your footballer. 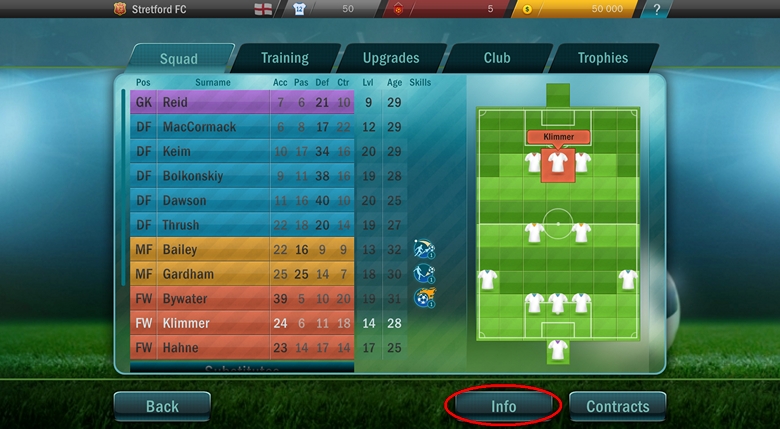 But if you would like the game to assign other names, you can clean up and assign them again using the buttons in the settings.

At the start of a campaign, the game doesn’t assign the names to the transfer list automatically. Do it manually.

Information about the available names 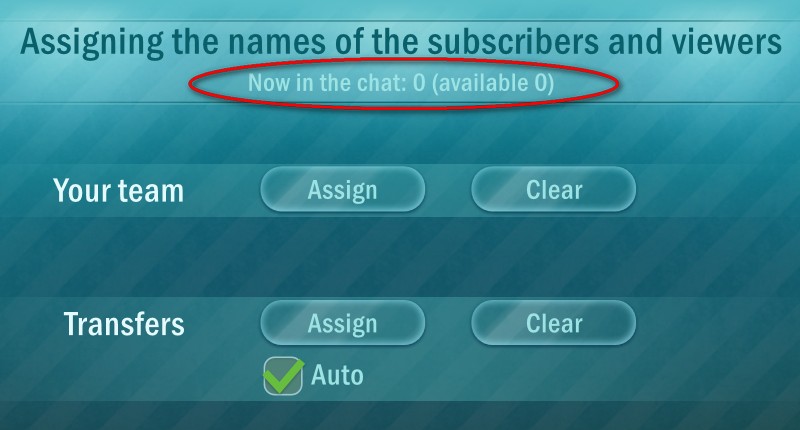 At the top of the screen, you can see the total number of the viewers. The number of viewers whose names are not currently used in the game is in parenthesis.

Youth Academy
Football Tactics 'sees' when you someone follows your channel during the stream. The game collects the names of the new followers, and when you go to the screen of the next match - the game welcomes them.

The name of the first follower who followed your channel in the new season automatically assigns to the young footballer which you will get at the next half season. Other followers will “go” to transfers.
Controlling the game from a chat
Viewers have the following possibilities to interact with the matches:
Assuming that the chat’s activity of the popular streamers is different than the one of the streamers with less audience, we added the possibility to set some interaction parameters. 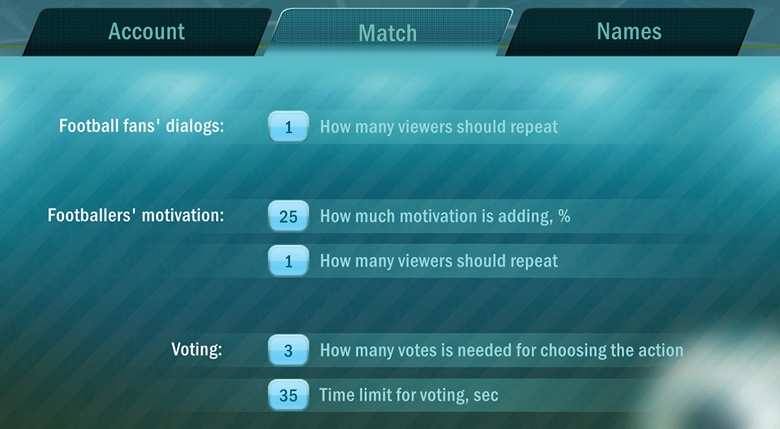 Your viewers shout from the tribunes
Imagine that you can hear everything the fans shout on the tribunes. You can hear their suggestions, opinions etc. It can be done in Football Tactics. 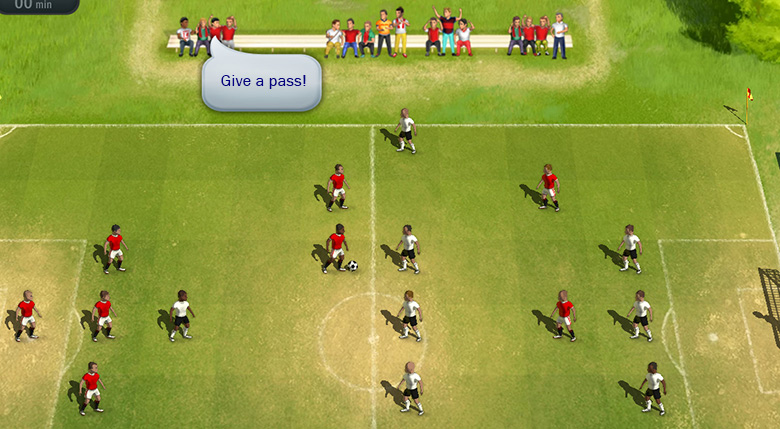 However, if you want the tribunes are active - set the low number (1 or 2). In any case - experiment with your viewers.

Footballer’s motivation
To motivate any footballer, your viewers should write his name few times in line in the chat. It works totally the same as the feature described above. But instead of some sentence, the fans on the tribunes will shout the footballer’s name.

As in the previous feature, you can set how many times the viewers should write the footballer’s name to motivate him.

Also, you can set the amount of motivation which will be added to the footballer.

Note, that when the motivation grows to 100%, the footballer’s attributes temporarily increase.
If you set “25” in the settings, your viewers will have to 4 times motivate the footballer to make him motivated.

The motivation allows you to win more powerful opponents. When your footballers are named by your viewers - the viewers might really like to motivate themselves or their friends.

Note, the viewers can motivate not only your footballers but also the opponent’s footballers. Inform your viewers about this possibility to find out how they love you ;)

Voting for the match’s actions
You can allow your viewers to decide themselves how to play in a match. You have two ways of doing it: 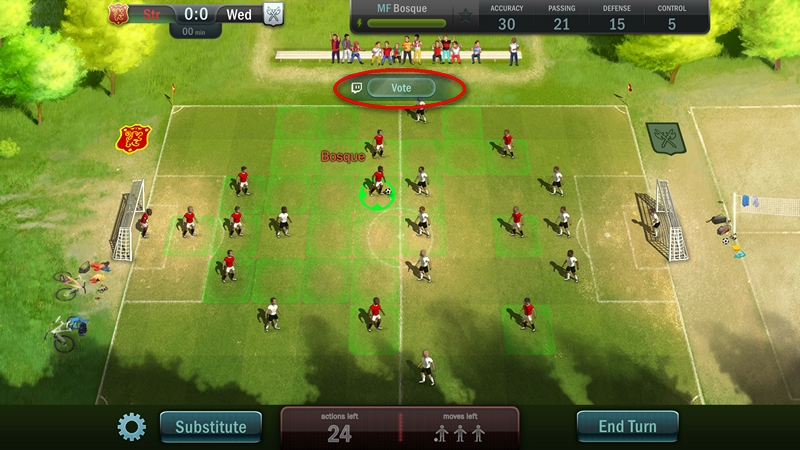 To vote, the viewers should write in the chat the number of a square. 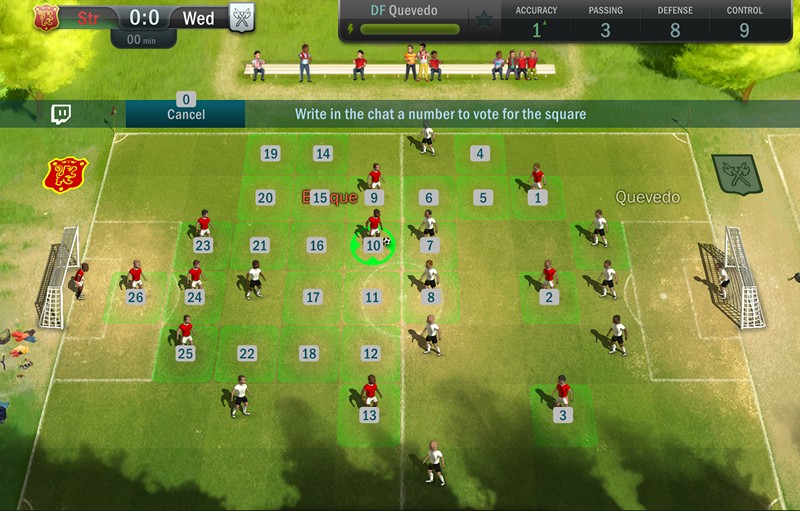 After the first vote is made, the countdown will start. You can set it in the settings.

To vote for the actions, the viewers should write the numbers shown atop of the actions. 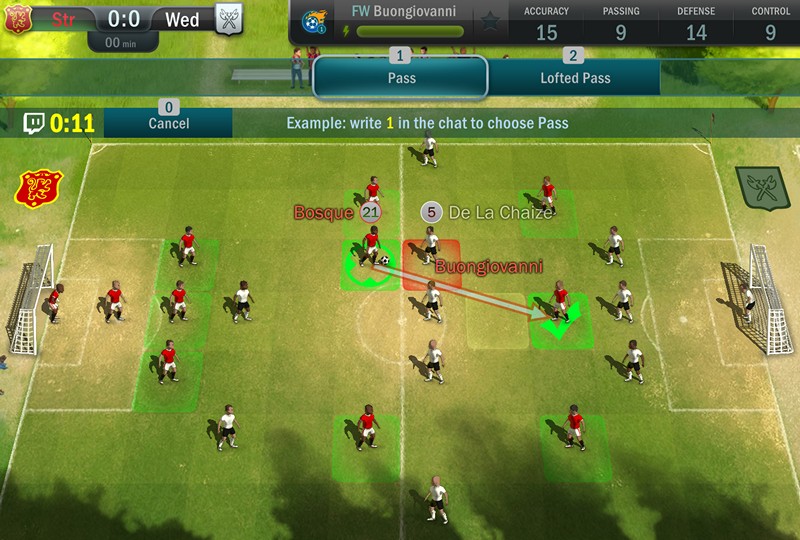 There are two options on the settings screen:

Final notes
We hope that your viewers will like to participate in the interactive streams of Football, Tactics & Glory. Share, please, your impressions. What you liked, what - didn’t. How your streams went? We are open for the feedback.