Greenlight > Games > Zero Gravity Games's Workshop
Greenlight is being retired. For more information on how to submit games to steam, refer to this blog post.
This item has been removed from the community because it violates Steam Community & Content Guidelines. It is only visible to you. If you believe your item has been removed by mistake, please contact Steam Support.
This item is incompatible with Greenlight. Please see the instructions page for reasons why this item might not work within Greenlight.
Current visibility: Hidden
This item will only be visible to you, admins, and anyone marked as a creator.
Current visibility: Friends-only
This item will only be visible in searches to you, your friends, and admins.
HELLION
Description Discussions82 Announcements20 Comments460 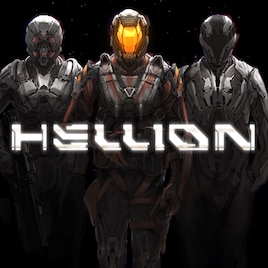 ZG_Rick
Offline
See all 78 collections (some may be hidden)

View HELLION in the store

It is my pleasure to announce that Hellion Store page is up!

Now, you can look Hellion up in Steam Store and add it to your wishlist. We invite you all to join the new Community Hub and take part in many vivid discussions.

Share the news with your friends and get ready for an epic space odyssey!

See you in Hellion!

Zero Gravity team is excited to announce that Hellion will be ready for Steam Early Access launch on Friday, February 24, 2017. That will be the moment when players from all around the globe will have a chance to join us in the grim dystopian future of Hellion, a world that we have been patiently building, piece by piece for quite some time now.

We would like to thank you all once more for the support you’ve shown, especially during the last couple of months that have given rise to a gaming community consisting of true sci-fi fans, hard-core survival players and space adventurers.

Our goal is to create the best possible player experience. But we are also looking forward to working together with an active and creative gaming community. We believe it is right to say that Hellion’s true development will start only once all of you have joined us in Early Access. We will be open to your suggestions, so feel free to share your thoughts and ideas on our communication channels.

It is a fusion of survival and space simulation genres that pits players against the deadly environment and one another. Survive the hard vacuum of space, extreme temperatures, deadly radiation and scavenge for basic resources like air, water, food and other items necessary for survival. But keep in mind, you are not the only one out there. There are others, but will they help, or will they throw you to the void without a second thought? Remember, no matter how brutal space may seem, it cannot hold a candle to man.

Hellion is a solar system several thousand lightyears from Earth. Despite its distance, it is the target of the first interstellar colonization mission during the 23rd century. Almost a million colonists, suspended in cryogenic hibernation, leave Sol on a journey that would take many decades.

However, when they wake up, almost a century later, they find themselves trapped inside a nightmare. Instead of living in a manmade paradise, they are forced to fight for survival surrounded by deserted stations, incomplete orbital habitats and derelict warships.

With the closest rescue operation decades away, orbital economy in disarray and no authorities in sight, many turn to scavenging, stealing and outright violence. Few others try to live more civilized and begin uncovering the truth behind the largest disaster in human history.

• Pilot your ship. Explore the world of Hellion through realistic navigation and scanning mechanics.
• Extravehicular activity. Exchange the safety of your ship for a thrilling EVA experience. Investigate derelict stations and ruined spaceships in search of intel, resources and valuable equipment.
• Hostile environment. Experience the hard vacuum of space, micro gravity, extreme temperatures, deadly radiation and toxic environments, while avoiding suffocation, hunger, thirst, fatigue and injuries.
• Find a derelict spaceship and restore it for personal use, or salvage it for parts to upgrade or repair your existing ship and outpost.
• Complex resource gathering system, including asteroid and comet mining and gas giant harvesting.
• Detailed crafting system, including: salvaging, research and reverse engineering.
• Unique damage and degradation model for systems and equipment.
• Complex maintenance of ships, stations and equipment.
• Fully modular and customizable ships, stations and equipment.
• Dive into an immersive background story and reveal the truth behind the devastation of Hellion.

• Full Newtonian physics. A full scale solar system based entirely on Newtonian physics and real orbital mechanics of all in-game objects from planets and moons to ships and stations.
• Seamless transitions. A persistent universe with seamless transitions, no loading screens or instancing. Travel freely between planets, moons and asteroids and move without restrictions between ships and stations.
• Zero gravity. Switch at will between controlled, artificial gravity and zero gravity environments. Learn the pros and cons of both and use them to your advantage.
• Realistic sound physics based on environmental pressure, distance and contact. Feel the roar of powerful engines and ship to ship weapons or move through the deathly silence of vacuum.

• Play the way you want. Immersive multiplayer interaction without artificial restrictions. Work together with your friends and crew mates or betray them for personal gain. Lend a helping hand to others, ignore them or move against them, the choice is yours.
• Realistic communication. Immersive in-game communication model including: proximity voice chat and radio communication over different frequencies. Hail other ships, search for distress signals or eavesdrop on unsecure channels.
• Permadeath system that rewards intelligent gameplay. Be ready to risk your life on every decision, but always have a backup plan.
• Large multi-crew ships needing several players to operate efficiently.
• Complex ship to ship combat including: detailed scanning, targeting, weapons and electronic warfare systems, subsystem destruction and realistic damage effects.
• Tactical close quarters combat combining boarding, hacking and realistic wound models.

TiraX Feb 5, 2017 @ 4:11pm
Could be a new arrival who has predefined enrypted channels to everyone in the group. Could be conspiracies back from earth.

EvilTarium Feb 4, 2017 @ 9:07pm
Yes spelling is not my strength, but still the developers seem to be edging more on the new charater spawn rather than respawn. From ZG_Rick:
When you log out of the game your character, ship and equipment all stay at the place where you logged out. There is no "invulnerability logout mechanics". If you logout in an unsafe location it is safe to assume that your character might get killed during the time you spend offline.
You can of course choose to log out properly, using a cryochamber. This way your character is protected from any direct harm and can only be killed if the station is destroyed.
When a character is killed you can choose to create a new character starting from scratch at a random starting location, or you can choose to rerspawn aboard your station inside a cryochamber.
From that yes there is a respawn mechanic, but only as long as the cryopod you were last in is active and avalable. Or until somebody breaks into your ship/station and pushes the "Clean" button.

EvilTarium Feb 4, 2017 @ 8:30pm
Yes but if you are playing in a more permadeath maner how do clans work? You are getting into some D&D level "Player knoledge vs Charater knoledge" thinking there.

HELLION has been Greenlit and is now listed in the Steam store. For the latest information, purchase options, and discussions for HELLION, please see it on the Steam Store or in the Steam Community.
Visit Store Page
For more details Visit Community Hub
For latest discussions
If you really, really want to, you can continue to the Greenlight page. Information on this page may be out of date, since all the action has moved to the areas noted above.