Store Page
Garry's Mod>  Workshop > Jacques BONFOIN [GiletJaune]'s Workshop
This item has been removed from the community because it violates Steam Community & Content Guidelines. It is only visible to you. If you believe your item has been removed by mistake, please contact Steam Support.
This item is incompatible with Garry's Mod. Please see the instructions page for reasons why this item might not work within Garry's Mod.
Current visibility: Hidden
This item will only be visible to you, admins, and anyone marked as a creator.
Current visibility: Friends-only
This item will only be visible in searches to you, your friends, and admins. 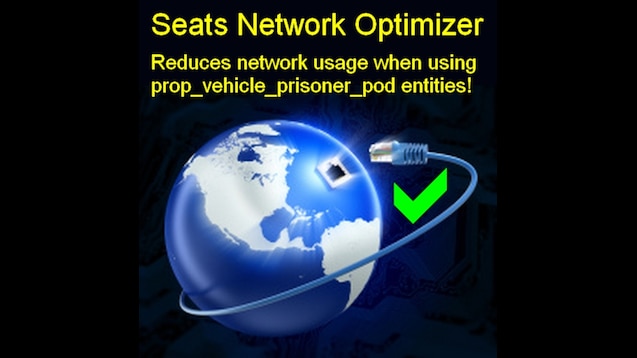 This item has been added to your Subscriptions. Some games will require you to relaunch them before the item will be downloaded.
In 8 collections by Jacques BONFOIN [GiletJaune]
Board Games by Mohamed Rachid

16 items
The TTT by Mohamed Rachid

195 items
The DarkRP by Mohamed Rachid

5 items
Description
Optimizer for servers & multiplayer games
This addon is designed to significantly reduce network usage when using numerous seats and prisoner pods.
This addon is totally useless in a local game, but it can decrease the network usage related to prop_vehicle_prisoner_pod on servers.
It works for standalone seats, passenger seats, SCars, Sit anywhere, prisoner pods.

Important
Note: The same trick applies to (not handled in this add-on):If you are a mapper, please make a lua_run entity triggered by a logic_auto entity, with the following Lua code:
for _,e in ipairs(ents.FindByClass('env_sprite'))do e:AddEFlags(EFL_NO_THINK_FUNCTION)end
How can I know how much traffic is saved?
Type in console: net_graph 3
The red trace is about entities traffic. It can get much lower with this addon.

Note
A problem causing non-seat vehicles to fail has been fixed on Feb 27, 2016.

Jacques BONFOIN [GiletJaune]  [author] Aug 10, 2019 @ 12:56pm
On the TTT there should be no useable seats / prisoner pods. I hardly can imagine seated players in the TTT. :-D
So in the TTT this addon should be useless.