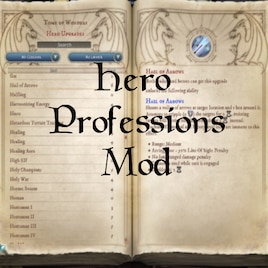 Eomolch
Offline
See all 156 collections (some may be hidden)

This item has been added to your Subscriptions. Some games will require you to relaunch them before the item will be downloaded.
Description
This mod reworks the racial hero upgrades from my hero development mod and replaces them with three different mutual exclusive upgrade paths. The new hero upgrades are unlocked by choosing one of three professions and can be learned at levels 1,2,4,6,8,10 and 13. Some of them are abilities from the vanilla game, others come from my racial heritage mod and yet others are entirely new. Additionaly at lvl 5, each professions unlocks a learnable spell from among the existing non-class dependant spells.

When using both of my hero mods there are 9 (races) x 3 (professions) x 7 (classes) x 3 (specializations) = 567 different hero setups based on the set of learnable hero upgrades! (With only the hero development mod active that number is 189. With only the base game + DLC's it is 7!)

This is the v1.00 version of the mod. So there may still be some bugs around which I encourage you to report here. Apart from that there are still some smaller features planned, like a secret spell for the werewolf mechanic or a complete documentation of the mod, so there are still going to be some updates.

**********CREDITS*******
-- a special thanks goes to Charlatan for his patient help when he showed me how to export/import ingame models
-- a big thanks to Franziskus for translating the mod into german (and for his patience :))
< >
104 Comments

Eomolch  [author] Jul 15, 2021 @ 11:24am
Hi Aurick! It's not that those starting abilities disappear when you enter combat, but when you recruit them. This is when such an ability has a requirement added by the mod which the hero doesn't have (e.g. a spell that belongs to Warlock II, but the hero doesn't have that specialization hero upgrade when joining). It's sadly only something that could be resolved by editing all the heroes to make sure such ability combinations don't exist, but I never found the nerve to attempt that as it would be super tedious work.

Zomboni Jul 11, 2021 @ 12:23pm
I've noticed that the unique abilities of heroes (such as if they start with invisibility or have starting spells) vanish the moment that hero enters combat. Is this intentional? If so, which .rpk was modified to do this (more for my own education on modding)

Eomolch  [author] May 15, 2021 @ 7:58am
Hi Nexious! I did actually look at the issue back then, but it was not simple to find the cause. I could only figure it out now because I ran into a similar issue while working on the new Tieflings.

Eomolch  [author] May 11, 2021 @ 12:30pm
In case anybody still cares about this, I just pushed a fix for the issue that Female Forstling Theocrat leaders could only learn Tigran professions instead of Frostling ones. (this is actually a fix in the hero dev mod, so there is no new version from this mod needed)

Twiggymc Apr 28, 2021 @ 5:58am
i was actually looking at it didn't even notice the name of the modder yea ill check it out for sure

Eomolch  [author] Apr 28, 2021 @ 12:37am
No problem, it was actually just good timing since I was playing and modding AoW3 again recently ;) (you may want to check out my new Tiefling race if you still play AoW3)

But I'm glad you brought this issue up so I could fix it.

Eomolch  [author] Apr 26, 2021 @ 11:28am
Hi Twiggymc! Sorry it took a bit longer to find time, but now the human female archdruid (and orc female archdruid) should also correctly get the racial hero upgrades :)

Twiggymc Apr 13, 2021 @ 3:25pm
Awesome, human arch druid is one of the few classes i havn't gotten a win on, and each time i try this kinda discourages me, its not a massive deal but its still nice to have
< >