Store Page
Original War >  Workshop > Sali's Workshop
This item has been removed from the community because it violates Steam Community & Content Guidelines. It is only visible to you. If you believe your item has been removed by mistake, please contact Steam Support.
This item is incompatible with Original War. Please see the instructions page for reasons why this item might not work within Original War.
Current visibility: Hidden
This item will only be visible to you, admins, and anyone marked as a creator.
Current visibility: Friends-only
This item will only be visible in searches to you, your friends, and admins. 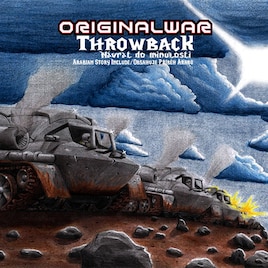 Gravitr
Offline
See all 10 collections (some may be hidden)

This item has been added to your Subscriptions. Some games will require you to relaunch them before the item will be downloaded.
Description
Note: Only balanced version.
Current version 7.5.7

Throwback expands game Original War in a high row, from the modification of original multiplayer maps, trough the new maps to new campaing (We apologize but only 2 arabs missions and 2 rebels[MP]).

It uncovers another layers of the dust from remains of thunder past, spinning like a wind around strategic material, catalyst of cold fusion, containing an incredible amount of energy and the origin is so mysteriou, as are his abilities.

Leaders of nations are now fighting on a completely unknown places, yet entirely irrelevant. New and new branches of alternate reality break away and join another, between the space and time they fight four absolutely identical groups of people, for an ancient artefact. Soldiers are on their own and forced to go through the wild, in constant danger from enemy attack. The new base is created and the fights are in the valleys full of death and on the crossroads and rivers.

A long time ago won battles flared again and again, manytime in a single moment, with different leaders and totally different people. It is now clear, that with the battle for the primary deposit is not the end fo the pas... way of the pas are really unpredictable.

However, it is necessary to go back to beginning, to the start. Because here we´re going to watch the mysterious figures of many languages with the same goal - destruction of primary deposit.

The modification includes the Arabian campaign, new multiplayer maps for both, odd and even number of players, missions from the original campaign, playable in multiplayer and multiplayer maps casually related the story campaign. All the nations are setting new power, balacned weapons, defence of the vehicles, etc.Arrabians get better for exaple with purposeful bulldozed and Russians get more powerful diesel power plant. This balance works both in multiplayer and campaign.


For community maps, you can copy the throwback.owp from the mod folder to the original war/CummunityMaps
< >
106 Comments

Sali  [author] Jan 2, 2021 @ 8:43am
@Deffington Currently, TB is broken in all directions, work is being done, but I don't have enough time to do it fast enough.
Anyway, TB doesn't change missions, I don't know why there's no button.

Deffington Jan 2, 2021 @ 6:39am
Hello. In Russian campaign mission 13 - The Triangulation, there is supposed to be a button for artifact research in laboratory. This button is missing in Throwback mod. Please help.

Tried to mingle with game saves with original game, but while the original game has the button and mission can be completed, it breaks before going next mission.

Sali  [author] Jun 4, 2019 @ 12:30am
Error log does not help because it does not make sense, it says there is no defined some function but it is defined. Save will not help because your save will work for me (last case experience)

So I dunno what's wrong.