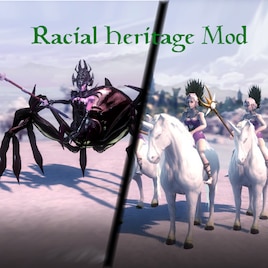 Eomolch
Offline
See all 618 collections (some may be hidden)
You need DLC to use this item.

This item has been added to your Subscriptions. Some games will require you to relaunch them before the item will be downloaded.
Description
This mod aims to add subfactions to each race, one for good and one for evil alignment (production isn't tied to alignment though). This includes 4 new units (2 per subfaction) which are unlocked in separate and mutual exclusive building chains that give some additional boni for certain units or the city itself.

******Known Issues******
- the AI won't use the witch lightning ability of the hag
- units adjacent to the hex where the aether gate is spawned can't use the use aether gate ability until they move one hex away and back next to the aether gate again (I reported this, but devs won't fix it since it's no feature of the core game)
- for players with lower spec PC's that use >= high texture quality it can happen that some of the new unit's models (e.g. high elf spider queen model) are only partially visible

******Credits*******
- Flenoom, for showing me how to vastly improve my spider queen model
- L_M_Glegg, for writing those great unit descriptions
- Franziskus, for translating the unit descriptions into german
- Charlatan for allowing me to use his amazing airship model

HjAa Apr 3 @ 4:11pm
This is a common bug not unique to this mod. The problem lies with your game files and you might need to verify them or re-install the game.
ずっと前私もその問題がありました^^

kosei Apr 2 @ 8:00am
I’ｍ Japanese.
some unit are invisible.Is it possible to fix bug?

Guvenoren Mar 2 @ 3:32am
I suppose the Statue of the Woods is because of this mod?

CapitaineYolo Jan 15 @ 11:02pm
Hello ^^ I have a question and figured I'd best ask you - do you know of a way to preview a units animations without having to enter the game? Thank you :)

Dragon Jan 7 @ 9:56am
Any compatibility patch to work with the Shadow Realm Expansion?

Dragon Dec 2, 2021 @ 10:24am
I think I may have found why the Frostlings cannot build their level 1 dedicated to evil building, cause in the Tome of Wonders it says to get to the Hunting Lodge it requires the Barracks and not the level 1 building, what ever it may be called =)