Store Page
Age of Wonders III>  Workshop > Minionslayer [Tibbles]'s Workshop
This item has been removed from the community because it violates Steam Community & Content Guidelines. It is only visible to you. If you believe your item has been removed by mistake, please contact Steam Support.
This item is incompatible with Age of Wonders III. Please see the instructions page for reasons why this item might not work within Age of Wonders III.
Current visibility: Hidden
This item will only be visible to you, admins, and anyone marked as a creator.
Current visibility: Friends-only
This item will only be visible in searches to you, your friends, and admins. 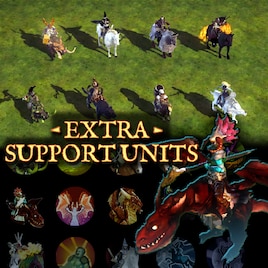 Minionslayer [Tibbles]
Offline
See all 406 collections (some may be hidden)

This item has been added to your Subscriptions. Some games will require you to relaunch them before the item will be downloaded.
Description
Adds new, tier 3 mounted support units to each race's core lineup (the Frostlings get a new t3 cavalry unit instead). Each unit has at least 1 new, unique ability, a new icon and modified textures for a new look.


Direct downloads can be found in the OP of this thread: Official Forums Link[aow.triumph.net]


The units can be built with cities that have the Chamber Of Mysteries upgrade, which is unlocked by the Temple.

In order to try and balance the units between classes, the following changes have also been made:

- The Archdruid's Long Strider skill has been modified so it only gives 4 move points to mounted units (it still gives 8 to unmounted ones)
- The Rogue has a new skill called Ghost Riders, which grants all mounted units Forest and Swamp concealment
- The Dreadnaught has a new skill called Armor Of Faith, which grants all support units Armored (including the +2 defense bonus) if they do not already have it. It also grants all support units +1 resistance.

This Mod currently has English and German text, if you'd like to provide a translation into French, Russian or Polish, then please let me know.

Special thanks to Maximo for the German translation!

☠Dragnoros, der Wächter (GER) Feb 25 @ 5:26am
nice mod... i have a problem. When the cosmic event "Rise of the Villains" start my game crash every time, because i get to much units with the hero which come.

I'm not 100% sure if it's really this mod...but I was able to turn off all the other mods without it crashing

AutoXtacy Jul 20, 2019 @ 4:56am
Anyone know why my last tier IV Tigran guy isnt showing up after all upgrades? I have thye battle priests but not the one that floats and can resurrect a team member to 35% health. Forgot its name.

Loken Jan 3, 2019 @ 8:37pm
Unfortunately I have to agree with some of the comments below. Super creative mod but I just had to unsubscribe from it because the balance still needs some fixes. The halfling support can spam a ranged aoe fire bomb attack 3X in a turn for example, plus it has very lucky (a trait I had tried to get rid of using another mod because it's so annoying). The Frostling support unit's ability to ignite is so powerful it generally becomes the core of the army rather than the support. I love all the ideas and played many games with this mod but I eventually found the units were too strong to work in my campaign.

Rexnos Sep 8, 2018 @ 5:05pm
I really loved the idea of this mod. Supports are quite frequently the slowest units in your army, and investing a little bit to make them faster sounds like a great idea.

Unfortunately, over half the supports in this mod are extremely busted. While I've uninstalled the mod, I can remember that the human has a better version of webbing touch (which is already essentially a save or die), the dwarf has an aoe battle length damage buff, and the draconian can transform into a dragon. I'd rate each of them as at least tier 3 1/2 and probably some of them as true tier 4s

La Pénombre Apr 7, 2018 @ 6:24am
I played one game with this mode.
That's cool new units, but i would not advise players to use this mod : It's just mounted support everywhere versus IA.
Support units have too much tools, and they have as much survivability or even more than tier 2 units, too cheap for their powerfull.
And of course, they have better ranged damages than most units of the game.