Greenlight > Games > Keith's Workshop
Greenlight is being retired. For more information on how to submit games to steam, refer to this blog post.
This item has been removed from the community because it violates Steam Community & Content Guidelines. It is only visible to you. If you believe your item has been removed by mistake, please contact Steam Support.
This item is incompatible with Greenlight. Please see the instructions page for reasons why this item might not work within Greenlight.
Current visibility: Hidden
This item will only be visible to you, admins, and anyone marked as a creator.
Current visibility: Friends-only
This item will only be visible in searches to you, your friends, and admins.
Auro: A Monster-Bumping Adventure
Description Discussions0 Announcements2 Comments33 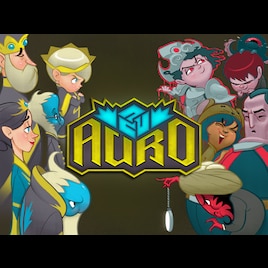 Keith
Offline
See all 2 collections (some may be hidden)
Kickstarter

View Auro: A Monster-Bumping Adventure in the store

The guys over at Rock, Paper, Shotgun did the following write-up about the game today and it's SUPER AWESOME: http://www.rockpapershotgun.com/2015/06/05/auro-quest-kickstarter/

More evidence that Auro is not just some "mobile game" - it's really something special, and it's going to make a phenomenal PC game.

Hey everyone! Thanks so much for supporting us here on Steam Greenlight! We're excited to get Auro out to PC, MacOS and Linux users who we know are going to really love our game.

You should know that we have a Kickstarter live for the Quest Expansion, which adds a new RPG-like, exploration/story-based Quest Mode. It's going well so far, but we could really use your help in gaining momentum!

Thanks so much everyone.

Auro introduces a whole new kind of gameplay: Bumping - the tactical use of movement, magic spells, and straight-up bumping to kill monsters to gain points, and become a master Bumper!

"You're rewarded for being clever, creative, and aggressive, and thanks to the scaling difficulty, there's always a new challenge around the corner." - TouchArcade (5 Stars)

Guide the magical Prince Auro through procedurally generated dungeons, with only a handful of tactical spells - and your wits - to protect you. Compete against other rival Kingdoms to get the best score!

Face a variety of monsters, each with their own cool tactical abilities, and then when they least expect it - give 'em a Bump, straight into the drink!

• Procedurally generated maps meaning you'll never face the same challenge twice
• PLAY MODE lets you build up your Rank over time, like an online matchmaking ladder
• Deep, interesting, and balanced system of gameplay - you can get better at Auro for years
• Crazy emergent complexity! You'll constantly surprise yourself with what's possible
• Nine unique spells that are the result of years of careful balance and testing
• Quick, no-nonsense gameplay.
• A whole cast of colorful and interesting monsters who will give you somethin' to think about!
• The entire game is made up of vibrant, hand-made and fully animated pixel art
• An original thematic soundtrack
• Comes with in-game tutorials, a web manual, a how-to-play gameplay video, and more ways to help you learn
• From Dinofarm Games, the creators of the hit dungeon-crawler 100 Rogues. We support our games for years!

We think it's a blast to play, and the critics agree (Auro has a 91% rating on Metacritic). This year it launched on iOS and Android, but now we're really happy to bring it to PC, MacOS and Linux!

"It may be slightly more demanding up-front than a Tetris sure, but show it a fraction of the forbearance given to an RPG or a 4X game and you’ll be entranced by a beautifully efficient design that makes the player feel like some arcane trickster genius." - Pocket Tactics (5 Stars)

Learn more at www.auro-game.com, or visit our site, www.dinofarmgames.com!
< >
33 Comments

voltoneup Jun 5, 2015 @ 8:48pm
I see you're having to pay the pixel tax even here, bummer. The artwork alone is amazing, rooting for you guys.

Keith  [author] Jun 5, 2015 @ 6:58pm
@MasterOfLazyness - I agree. I not only would be, but I *AM* skeptical of mobile games brought to Steam, for exactly the reasons that concern you. It's just, I'm telling you, this really isn't a mobile game. It's a real, serious *VIDEOGAME* that just happens to have been released first on mobile. If we could go back in time, we would have released on PC first, or maybe even PC-only, because I think the demand for serious strategy games like ours on mobile devices is actually a lot lower than we hoped.

As to the trailer, hmm. That's a good point, although we need to balance "explaining what it is" with making sure the trailer looks fun. We do have a big video tutorial up, if you'd like to see that - it certainly explains the gameplay, in depth!

Hope that helps. Let me know if you have any more questions.
< >

Auro: A Monster-Bumping Adventure has been Greenlit and is now listed in the Steam store. For the latest information, purchase options, and discussions for Auro: A Monster-Bumping Adventure, please see it on the Steam Store or in the Steam Community.
Visit Store Page
For more details Visit Community Hub
For latest discussions
If you really, really want to, you can continue to the Greenlight page. Information on this page may be out of date, since all the action has moved to the areas noted above.