Store Page
Garry's Mod>  Workshop > Sonador's Workshop
This item has been removed from the community because it violates Steam Community & Content Guidelines. It is only visible to you. If you believe your item has been removed by mistake, please contact Steam Support.
This item is incompatible with Garry's Mod. Please see the instructions page for reasons why this item might not work within Garry's Mod.
Current visibility: Hidden
This item will only be visible to you, admins, and anyone marked as a creator.
Current visibility: Friends-only
This item will only be visible in searches to you, your friends, and admins. 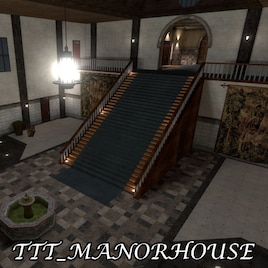 Sonador
Online
See all 4475 collections (some may be hidden)

This item has been added to your Subscriptions. Some games will require you to relaunch them before the item will be downloaded.
Description
ttt_manorhouse, A mansion reminiscent of Nipper's clue, albeit on a larger scale and using only HL2/CSS resources.
Recommended number of players: 6-20
FOR BEST RESULTS, RUN THIS MAP WITH FULL HDR.

Some comments about the map:

The Good:
- This is my best optimized map yet, with VVIS taking a grand total of four seconds to complete. This map can be played on high and low end rigs both.
- This map features some neat easter eggs. Walk into the closet in the bedroom, use the radio in the living room, hit the switch under the stairs, and a few others.
- Despite being all indoors, I tried to make the map relevant for players using all weapon types.
- This map has a total of about 50 spawns, making it capable of handling a large playerbase even if it's not necessarily balanced for it.
- The elevator has a built-in anti-block/crash/abuse system.

The Bad:
- Currently, Garry's Mod has broken ambient_generics. This means that all of the sounds in my map play at the map's origin, under the stairs. To properly evaluate the sounds I've used in the map, run the dev branch of gmod under the beta's tab of the properties box. Fixed as of latest update
- The art direction of the map is schizophrenic at best, the map started out originally as an RP map and was rebuilt for TTT on a totally different plan.
- There's a known bug in the social hall where some physics props will render fully black. This is clientside and is fixed simply by walking out to the lobby and back in. This is caused by the toggleable light in the lobby.

nanwarrior Feb 6 @ 1:21pm
can somone help me the entire mansion is black and purple and filled with errors can somone tell me how to fix it?

Alwoke Jan 2, 2018 @ 3:28pm
I wanted to explore a mansion and this map satisfied me. Nice work! I hope you can keep working ot it, its beautiful.

Sonador  [author] Aug 20, 2016 @ 1:54am
The map isn't arranged to logically have an exterior, it's be horrifically ugly. Perhaps someday I will work on a remake.