Store Page
Tales of Maj'Eyal>  Workshop > dracos12's Workshop
This item has been removed from the community because it violates Steam Community & Content Guidelines. It is only visible to you. If you believe your item has been removed by mistake, please contact Steam Support.
This item is incompatible with Tales of Maj'Eyal. Please see the instructions page for reasons why this item might not work within Tales of Maj'Eyal.
Current visibility: Hidden
This item will only be visible to you, admins, and anyone marked as a creator.
Current visibility: Friends-only
This item will only be visible in searches to you, your friends, and admins. 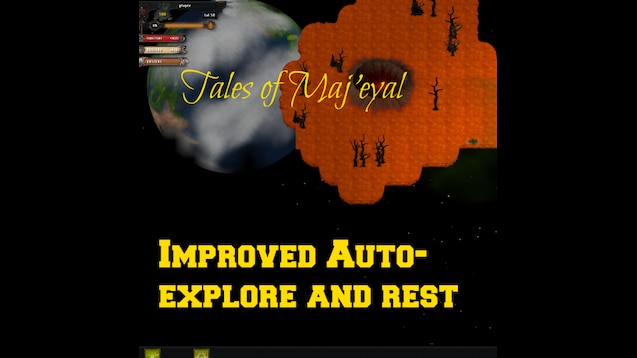 dracos12
Online
See all 23 collections (some may be hidden)

This item has been added to your Subscriptions. Some games will require you to relaunch them before the item will be downloaded.
Description
Quality of Life improvements for resting and auto-exploring.

v3.5.0 *** FOR ToME v1.6.5 ***
This is a fork (with permission) of Marson's auto-explore and rest tweaks. It includes as well C.Lowe/CaptainTrip's improvements as well. It does not include, but recommends also using Johnny0's Faster RRE add-on for even better rest and auto-explore experience. This add-on contains numerous Quality of Life improvements designed to make resting and auto-exploring easier to use, brings the add-on overall up to being compatible with 1.6.x, and generally seeks to remove it being more optimal to do timed rests or manual recovery (particularly to help higher difficulty level and players without Faster RRE). Cleaned up feature list in this take, to make it easier to see what it does.

It is recommended to turn off Marson's Rest and Auto-Explore as well as C.Lowe's Rest Tweaks if using. This addon is meant to include all of them.

Latest Update Notes:
• Changed steam sustain behavior to match current gameplay. Before sustains tended to shut off when available resource was 0, now they don't seem to do so. This will now only turn off sustains that drain steam if steam is going below 0, so as to get to a steady finish state.
• Fix minor bug where stealth enabling was always on if you had it.
• Added new option to ignore quest members when resting or exploring. It defaults to off but for those folks that know they want to ignore those quest allies and rest a bit.

Existing Features:
• removed First Sighting and Reset on Rest. Someone can patch them in if they'd like it back, but I'm not really keeping them alive.
• Fixed actor bugs causing Elemental Surge to never reset. Thanks Reca♥den.
• Fixed bug with Paradox Spacetime Tuning from 1.5.5. This may rebreak posessors with paradox, hard to kinda test.
• Mostly verified working on 1.6.0
• Compatibility with restart sustains. Thanks zizzo.
• When resting, it will check for infusions and runes that could be used to accelerate HP, Mana, or Equilibrium (via Ancestral Life or Meditation) recovery. If the acceleration appears significant, it will use them, rotating from first available infusion or rune outward. In experiment, I found this often reduced rest turn time by 50-80 percent, improving the more drained the resource was. Particularly helpful for Mana, as it avoids trade-off advantages of short term resting (for increased mana regen) + rune use by just handling that more optimal play for you automatically without breaking rest.
• Support for steam implants, with usual checkboxes. This may not always be faster based on steam sustains that may disable after the initial round of rest and steam implants having very long cooldowns (30+ turns) and steam's resource max being pretty small. It tries to be conservative on that, so will most likely help for cases where your functional steam regen rate is < 2.00 and never activate for things much above it. I found I was often getting 5-20 steam per turn, which makes the implant support useless.
• Supports for medical healing salve injectors. Cooldown measurements are a bit odd here, since they can range from 5-20 depending on injector. Went with 10 as a happy medium for how many turns of natural regen is considered to be equal to the cooldown cost of using it.
• Adding support to auto-stealth if available and not stealthed.
• Option for ignoring small damage when moving and resting, basically if it is <5%, it will ignore it by default, prevent small DoTs from preventing rest.
• Options added to control whether or not to use inscriptions to accelerate recovery of things.
• Fixes a ToME bug that can cause autoexplore or running to move only a single square and hang if used immediately after killing an enemy.
• Lore discovery will only stop autoexplore if it triggers a popup.
• Autoexplore will ignore Exploratory/Infinite Farportal return portals until the entire level has been explored.
• Ignores special terrain features such as Font of Healing after they are first discovered.
• Ignores open chests and alt Maze floor cracks.
• Rest and AE ask for confirmation if you have an escort in your party.
• Ignore already activated pedestals.
• Checks for and waits on any rechargeable items.
• Checks for and reloads any ammo in offhand quiver.
• Waits for cooldowns of talents set to auto-use.
• Waits for depleted air to replenish.
• Combines all checks into a single instance of rest, rather than having cooldowns etc. require a second resting phase.

Determines how auto-explore and running respond to telepathy, including mouse moves. Regardless of the setting, hostiles seen via telepathy will not halt resting or the Rod of Recall, nor trigger automated talents. Unique or powerful monsters (rank > 3) will always trigger a halt to running when they are spotted via telepathy for any mode except 'Original'.

Notes:
Folks who have helped with bugfixes over the years:
Reca♥den
St_ranger_er
zizzo

• Telepathy will not prevent auto-exploring the way normal sight will. If a halt is triggered by telepathy, hitting auto-explore again will move you at least one more square in the direction of the auto-explore path. If in 'Always Viligant' mode and a hostile is within telepathic sight (but not normal sight), you will auto-explore in 1 square per keypress increments.
< >
122 Comments

@Naramyth - yes, but will likely wait for 7 to get out of beta. Odds are high something breaks in it, and I'll likely go through then.

Not actively playing this right now so it is slow.

Naramyth Oct 21 @ 4:38am
Would it be possible to add an exception for Track? I used to have track auto cast out of combat so it would go off while auto exploring. With this addon it now waits for all cooldowns, including Track.

knifebutton Mar 10 @ 8:11pm
uninstall and reinstall of the addon fixed my issue where paradox would NEVER go down. No issues.

dracos12  [author] Feb 27 @ 9:47pm
In what way? Was pretty sure paradox was working fine when I last tried it. Gonna be a bit till I can boot up the game and give a proper check since traveling.

Your 13 mana boi Dec 4, 2019 @ 6:11am
I wish there is an option to turn off confirmation of rest&auto-explore when escorting