Store Page
Garry's Mod>  Workshop > HighVoltage ⚡'s Workshop
This item has been removed from the community because it violates Steam Community & Content Guidelines. It is only visible to you. If you believe your item has been removed by mistake, please contact Steam Support.
This item is incompatible with Garry's Mod. Please see the instructions page for reasons why this item might not work within Garry's Mod.
Current visibility: Hidden
This item will only be visible to you, admins, and anyone marked as a creator.
Current visibility: Friends-only
This item will only be visible in searches to you, your friends, and admins. 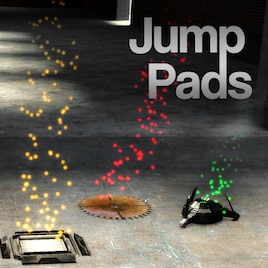 HighVoltage ⚡
Offline
See all 13025 collections (some may be hidden)

This item has been added to your Subscriptions. Some games will require you to relaunch them before the item will be downloaded.
Description
Unreal Tournament inspired jumppads for reaching those hard to get to spots, or launching random players across the map for lols.
I've packed a lot of features into these as well as a tool that lets you place and set their target, as well as update any settings.

Features
* Change various setting such as:
- Effect color
- Launch sound
- Model
- Negate fall damage
- Air time
- Key to turn on/off
- Key to trigger like a button when launched
* Tool to spawn and edit jumppads
* Spawnable from spawnmenu
* Change properties in real time from the context menu
* Weld to world/props with tool
* Spawn limit for servers ( The effects break after about ~80 are spawned)
* Duplicator support
* Wiremod support
- I'm not sure how well this works in practice because I've never really used wiremod
* Servers can add their own sounds/models to the tool
- Works just like the material tool to add more models/sounds:
list.Set( "JumpPadModels", "ModelPathHere.mdl", {} )
list.Set( "LaunchSounds", "SoundName", { jumppad_soundname = "SoundPathHere.wav" } )
* Can be used by map developers in hammer
- I can upload the fgd file if there are any interested
* Probably some more I've forgotten

That's it for now
I'm most likely going to add to this later, as well as fix any bugs that might pop up.
So have fun launching stuff around at full speed!
Popular Discussions View All (5)

how to use
[NZS] Patrick the Legendary
< >
71 Comments