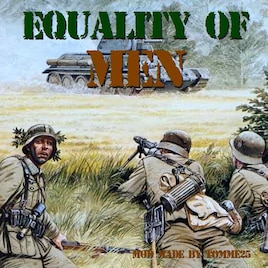 Helmet Hair
Offline
See all 37 collections (some may be hidden)

This item has been added to your Subscriptions. Some games will require you to relaunch them before the item will be downloaded.
Description
Realism mod (kind of!) Lowers health for all infantry and vehicles.

This is a very small and simple mod that I made because I was not happy with the infantry based weapon damage in vanilla Men of War: Assault Squad 2 for skirmish missions.

Changes I have made are how much health and armour every soldier / tank has. (From version 1.2 I have also made some changes to weapon accuracy, check "updates" down below for what is changed) Now you are equal to the enemy in terms of protection, and I have changed this for Easy, Normal and Hard. Heroic is untouched.

Even "Easy" provides a challenge without you having to resort to higher difficulty in form of the AI spamming Tiger Tanks two minutes into the game ;)

This mod should also work for custom skirmish maps or mods that don't do any changes to the difficulty or modifies the smg and the mg.

Updates
v. 1.8)(2016-03-24)
Made some changes to the rifle, sniper rifle and machineguns. I increased the damage for rifles just a little. I lowered the range for machineguns and sniper rifles to the same range as normal rifles. I always find it annoying when the AI start spamming snipers and keep picking off your men that are entrenched one after another. While snipers still are very good and constanly one shot kill infantry, they are a bit more vulnerable now. So if you can spot that pesky sniper you can counter him with rifle fire now :)

v. 1.7)(2015-11-22)
Another patch, another fix. Delete the mod from the in-game menu, and resubscribe. It should now download the right version, and will be playable again. Hopefully this will end the patching for a while.

v. 1.6) Updated the mod to work with patch 3.201.1. I didn't know Men of War 2 had been updated yet again, thus breaking the mod, but it should work now again. Just remove the mod from the Men of War/mod catalog and let steam update it.

v. 1.5) Updated the mod to work with the latest patch (3.118). I changed the maximum version check to 3.999.9. So now the mod should be working while they continue to pump out patches, well at least until they change version number to 4 :)

v. 1.2) I have edited the accuracy of the mg and smg. The smg has the same accuracy from close to medium range, but the spread gets much bigger after that. The mg has had the accuracy lowered overall. Both these weapons are still fearsome weapons, but now at least the mg is not the end all ultimate weapon. These changes has made the rifle much more viable in longer range combat, while the smg continues to dominate in close quarters. The changes to these weapons have also made the skill of the soldier much more important when it comes to weapon-handling.

If you want the update, make sure to unsubscribe and re-subscribe. For some reason workshop is having trouble updating the file on its own.

v. 1.1) I have lowered the health by half for all human units for all difficulties. It feels a lot more dangerous now, bullets actually do damage on range now. Still it seems balanced enough so you got time to take cover with your men. Close range ambushes will cut down your men though, but that goes for both sides, AI and you :)
< >
89 Comments

Shrimpo Apr 3, 2020 @ 2:06pm
if one leg is shot is causes the soldier to move slower and aiming is also nerfed because of the pain. if both legs are shot the soldier would have to crawl and of course, less accurate aiming.

Shrimpo Apr 3, 2020 @ 2:06pm
if both hands are shot it still lets the soldier shoot, except that since bot arms are hurting the soldier, his aiming is really off and direct control wouldn't really help as it is really wobbly and shaky.

Shrimpo Apr 3, 2020 @ 2:06pm
if it hits his shooting arm he would have to use his secondary on his other hand which causes the soldier to aim less accurately and even if you direct control him the aiming icon would shake as the soldier is not using his shooting hand.

Shrimpo Apr 3, 2020 @ 2:06pm
Helmets and armor have a higher chance to go through the helmet/body armor if many bullets get stuck or deflected.

Shrimpo Apr 3, 2020 @ 2:05pm
if it hit the torso of the soldier, a more experienced soldier might be able be able to handle the pain, however a private or recruit might get knocked out from the pain, there is also body armor which also have the chance to be deflected, stuck on the armor, or get through.

Shrimpo Apr 3, 2020 @ 2:05pm
sammakko it isn't always that one shot would kill someone, if it hits the head, insta-kill, if the soldier is wearing a helmet a there is a chance it might go through and a chance to get stuck, and chance to be deflected.

Helmet Hair  [author] Jan 2, 2019 @ 10:59am
Also updated to the current MoW 2 patch. So if you have any trouble activiting it, just resub and it should download the latest version.
< >