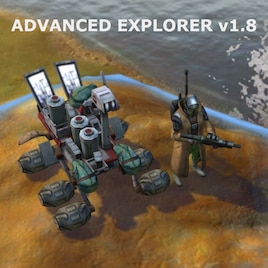 Gorbles
Offline
See all 39 collections (some may be hidden)

This item has been added to your Subscriptions. Some games will require you to relaunch them before the item will be downloaded.
Description
Version 1.8
NOT COMPATIBLE WITH RISING TIDE
A mod that introduces Affinity progression for the Explorer unit, with a focus on surviving sustained alien attacks and becoming a mobile raiding unit, without making it effective in combat against combat-dedicated units.

Progression paths for each Affinity:
< >
94 Comments

HawkofChiron Oct 6, 2019 @ 6:42pm
"Thankyou for the mod; I was hoping someone would make them hover. There are some ruins that sometimes appear in unaccesable places like the top or bottom of the map."----As Quasar said. I am surprised there isnt a hover mod for explorers!! There are a ton of submersed derelicts and such out beyond....the ice wall...

QUASAR Aug 22, 2017 @ 8:28am
Thankyou for the mod; I was hoping someone would make them hover. There are some ruins that sometimes appear in unaccesable places like the top or bottom of the map.

Gorbles  [author] May 12, 2016 @ 2:23am
The unity upgrade screen was ported back to the vanilla game I think. I might have to devote some time to fixing this.

Sorry for the radio silence, had some big commitments IRL to sort out.

Fives May 12, 2016 @ 12:25am
I have the same problem as Aysling.
This was my preferred Explorer mod but using it makes all unit upgrades impossible. Has nothing to with Rising Tide, I don't own it.

Gorbles  [author] Jan 22, 2016 @ 2:41pm
This mod isn't compatible with Rising Tide yet (simply haven't had any time for modding), as per the description. Not sure anything can help that save, there (though you shouldn't have been able to progress that far with it).