Store Page
Tabletop Simulator >  Workshop > StarCaptainDread's Workshop
This item has been removed from the community because it violates Steam Community & Content Guidelines. It is only visible to you. If you believe your item has been removed by mistake, please contact Steam Support.
This item is incompatible with Tabletop Simulator. Please see the instructions page for reasons why this item might not work within Tabletop Simulator.
Current visibility: Hidden
This item will only be visible to you, admins, and anyone marked as a creator.
Current visibility: Friends-only
This item will only be visible in searches to you, your friends, and admins. 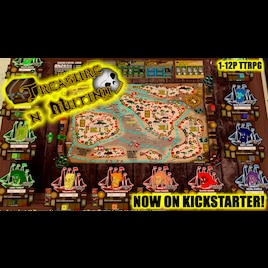 StarCaptainDread
Offline
See the collection (may be hidden)

GAME SETUP
Pre-Configured for 1-12 Players / Quick Game Setup !
Read the Rules... Roll to Determine Turn Order, Distribute Pirates According to the # of Players participating, then Pick an End Game Scenario to start!

Updated 7/13/22 - Character Card Art Update, Rulebook Retail Edition!
This update took a bit longer than expected due to the rulebook update (40pages of editing!) - Apologies!
+ In preparation for the kickstarter launch, I updated the Character Card Art, Rum Tokens, and the Rulebook!
+ The Rulebook has not had any rule changes (except in regards to the character cards), but some new pages were added to better organize the book + better describe specific game features and I also improved the font for the sake of readability!
+ There is also now 4 pages of AD space for Pirate/Nautical Vendors at the back of the book who will have a pledge option of sponsoring our game on kickstarter, and in trade have an ad for their pirate related merch in our rule book!
(Such as Vendors selling Gold Coins, Pirate Swag - stuff that will help players immerse themselves even further in their glorious adventure should they choose!)
+ If we cannot find vendors interested in this glorious advertising opportunity... I've got a few pages of bonus pirate related content to replace them when we publish the retail edition!
+ PLEASE FOLLOW THE KICKSTARTER - AS WE WILL BE LAUNCHING IN THE NEAR FUTURE!

(Updated 10/23/21) +2 *New* Expansion Pack Add-Ons Now Available / Art Update!
+ Updated Rulebook (+Diagrams), Updated Art (Crew/Treasure)
>> "Forts 'N Marauders" is the 3rd Treasure N Mutiny Game Expansion Kit that will be an extra optional add-on for the game released separately from the main game! I have included it on our Tabletop Simulator Edition, so that players can try out this explosive new addition to the game as an extra optional bonus! Forts N Marauders introduces roaming Merchant and Pirate Vessels that act as mobile Raid locations, and Island Fortresses which are similiar to Pirate Harbors but use RAID style dice combat & come equipped with a Forge and a Gold or Weapon Pick-Up Point.
+ 2 Merchant / + 2 Marauder Ships
+ 2 Merchant Dice / + 2 Marauder Dice
+ 4 Island Fortress Cards
+ 12 Fortress Dice
>> "Curse of the Undead Warlock" is the 2nd Treasure N Mutiny Game Expansion Kit, which introduces Long Lasting Curses and Warlock Totems into the game! Warlock Totems can also be given away, allowing you to roll for another player - or collected and sacrificed to place a long lasting curse on an enemy!
+ 1 Curse of the Warlock Expansion Card
+ 16 New Totem Tokens
+ 12 New Warlock Curse Cards

(Updated 10/14/21) + Expansion Pack Add-On Now Available
> The "Forge of Ironhand" is a Treasure N Mutiny Game Expansion Kit that will be an extra optional add-on for the game released separately from the main game! I have included it on our Tabletop Simulator Edition, so that players can try out this explosive new addition to the game as an extra optional bonus! Using the Forge, players can combine items like Hemp and Rum with different weapon cards... and turn them into "ENGINEER'N MARVELS" like sniper rifles, a bag to carry extra gold, explodin' coconuts, guillotines, and an exploding barrel of fun called the Shipwrecker.
+ 1 Forge Expansion Card (Includes Rules + Storage Spaces for new items)
+ 5 New Craftable Special Items
+ 21 Tokens (Guillotine Trap x3, Satchel x3, Firebomb x6, Sniper Rifle x6, Shipwrecker x3)

FOR A SLIGHTLY SAUCIER GAMEPLAY EXPERIENCE . . . (21+)
Grab a Bottle of your favorite Rum & Play the Shots Fired Mini-Game!

StarCaptainDread  [author] Jul 17 @ 7:19am
Note: Minor Adjustment uploaded on 7/16/22!
- After uploading the new rule book on 7/13 and reviewing the upload meticulously, I noticed a slight error seemed to have occurred with compressing the text into PDF on pages 3/4 so i took a couple days to ensure these were the only issues; and then fixed these errors and re-updated the game last night on 7/16.

Note: Kickstarter Launch Imminent !
- After these final updates/content reviews, Treasure 'N Mutiny is now ready for launch on Kickstarter! I am now in the process of measuring all components for the manufacturer to manufacture the 1st prototype of the Retail Edition. I will also be posting more videos soon!
We will be aiming to manufacture a minimum of 500 copies with our partners at GAMELAND. Please check out our kickstarter launch page to help kick us out to Sea!
https://www.kickstarter.com/projects/starcaptaindread/treasure-n-mutiny

Thank you for your continued support!
- Star Captain Dread