Store Page
rFactor 2>  Workshop > Global Endurance Modding's Workshop
This item has been removed from the community because it violates Steam Community & Content Guidelines. It is only visible to you. If you believe your item has been removed by mistake, please contact Steam Support.
This item is incompatible with rFactor 2. Please see the instructions page for reasons why this item might not work within rFactor 2.
Current visibility: Hidden
This item will only be visible to you, admins, and anyone marked as a creator.
Current visibility: Friends-only
This item will only be visible in searches to you, your friends, and admins. 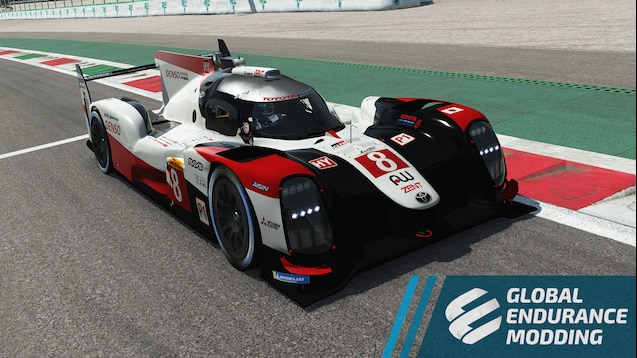 bbskier
Online
See all 28 collections (some may be hidden)

This item has been added to your Subscriptions. Some games will require you to relaunch them before the item will be downloaded.
Description
The Toyota TS050 Hybrid is a sports prototype racing car developed for the 2016 Le Mans Prototype rules in the FIA World Endurance Championship. The car is the direct successor of the Toyota TS040 Hybrid, which competed in both the 2014 and 2015 FIA WEC seasons. The TS050 was revealed at the Circuit Paul Ricard on 24 March 2016 due to Toyota's 2-year cycle policy.

The engine is a 2.4L twin-turbocharged petrol V6, while the two previous cars used a naturally aspirated petrol V8. It features an 8-megajoule hybrid system, which uses lithium-ion batteries.

At the moment, it is not possible to implement hybrid technology in rFactor 2, but we have replicated the hybrid feeling, giving it an authentic and realistic feel. That includes four-wheel drive. The car features a 6-speed sequential semi-automatic gearbox.

The car has multiple aero configurations, including the unique LDF model that was used at the 24 Hours of Le Mans.

Michał Baranowski May 12 @ 3:51pm
This comment is awaiting analysis by our automated content check system. It will be temporarily hidden until we verify that it does not contain harmful content (e.g. links to websites that attempt to steal information).

Global Endurance Modding  [author] May 12 @ 12:18am
That is factually incorrect. The current version of all 4 cars do not only have league BoP - in fact, the real life BoP is the standard package, while the league BoP is still in development - and the rev limits are matching real life as well, even in the league BoP package.

Michał Baranowski May 11 @ 2:55pm
Really disappointing that single player physics were removed from this and other LMP1 cars made to rf2 by you. League physics makes no sense - Toyota, Ginetta or BR1 never revved up to 9000 RPM.

Aymeric_Le_King Apr 12 @ 6:42am
I downloaded this mod but an error is displayed "error getting stats for texture 08_NGR.BMP
error loading texture 08_NGR for material WCCARBODY"
Also, because of that, my Toyota doesn't have the textures like the sponsors for example. She's just white and buggy

ᴮᵉᵉᵗˡᵉʲᵘⁱᶜᵉ Mar 24 @ 2:54pm
All files I found that were named something with Nagoya were Photoshop files and I deleted them. Still get the same error message when loading into a race

Global Endurance Modding  [author] Mar 24 @ 2:40pm
Further explanation: there's no 08_NGR file anymore since V2.01 and none of the meshes/shader configs are referencing it either, so an old files is overwriting a correct shader config file, causing the error.

Global Endurance Modding  [author] Mar 24 @ 2:39pm
It's 100% some old files that are interfering with the new car. I have no issues loading all of the liveries. Do you have any custom liveries in UserData\player\Settings\Nagoya... or a custom skin pack using these cars by any chance?

ᴮᵉᵉᵗˡᵉʲᵘⁱᶜᵉ Mar 24 @ 1:35pm
Hey, I've downloaded this mod a few hours ago and whenever I start a race with this car I get an error and the design of the car doesn't load.

Reinstalling the mod or simply restarting the game/pc didn't solve the problem. Do I need to download something else for this to work since it was payware before being available for free.
< >