Store Page
Tabletop Simulator >  Workshop > Nalik_SUD's Workshop
This item has been removed from the community because it violates Steam Community & Content Guidelines. It is only visible to you. If you believe your item has been removed by mistake, please contact Steam Support.
This item is incompatible with Tabletop Simulator. Please see the instructions page for reasons why this item might not work within Tabletop Simulator.
Current visibility: Hidden
This item will only be visible to you, admins, and anyone marked as a creator.
Current visibility: Friends-only
This item will only be visible in searches to you, your friends, and admins. 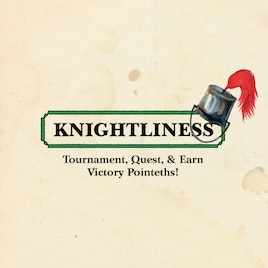 Nalik_SUD
Online
See all 2 collections (some may be hidden)

This item has been added to your Subscriptions. Some games will require you to relaunch them before the item will be downloaded.
Description
Become a traveling Knight! On your journey you will battle in tournaments and set out on glorious quests. Being the best Knight will earn you victory points along the way. The Knight with the most victory points wins!

Knightliness is a trick-taking card game played in 8 rounds divided equally into tournaments and quests. Each face card is divided into two sections called tournaments and quests, the quest and tournament sections will be played depending on which event card was revealed at the begin of the round. Each draw from the deck will present a strategic challenge, choose well and be victorious!

Nalik_SUD  [author] Jun 29, 2021 @ 9:26pm
Artwork and instructions have been updated. If you see anything out of place let us know. Thanks for playing!

Nalik_SUD  [author] Mar 31, 2021 @ 7:52pm
Knightliness is currently being developed. If you've had a chance to play we would love to hear what you think! Please take a few minutes to fill out our online form at https://forms.gle/uNYyr1dpr7QjFESg8 , or post below. Thanks for playing!
< >