3 Tips to improve your game now
By Marcinos1985
A piece of advice about game mechanics. If you want to improve, especially if you are beginner, look no further and enjoy reading.

Comments
Introduction
Strategic Command: World at War is not an easy game. Although it follows quite simple mechanics, there is a lot of depth. It's one of these games that becomes complex not because of rules, but becuse of wide range of decisions you must make nearly each turn.

But before you make these decisions, you have to remember about fundamentals. Even the best strategic plan will not work if game mechanics are not respected. In my PBEM games I often see that basics are not respected, even by intermediate players, not mentioning beginners. One may of course bully them during games/on forums, but why not write a guide instead?

Range of topics is very wide, but I decided to focus on 3 aspects, which in my opinion are very important. These are:

All very important concepts, when put to use will improve your gameplay a lot. Guide is especailly dedicated for new players/beginners, but midlevel players may find something interesting here too.

This guide is a result of 30+ PBEM games of mine and extensive reading of Matrix forums. I also wrote a guide on Allied side research, feel free to check it out.
1. Use your HQ's
HQ's are the most important units in the game, for 2 reasons. First of all, they boost combat readiness of units attached to it. Secondly, they increase supply in enemy territory, allowing your units to fight better. Let's have a look at the first topic, supply will be described in next chapter.

If you delve deep enough into manual, you will learn, that attaching your units to HQ's will grant them combat bonuses. Sounds great, but is this bonus significant? Screens are taken from the first Axis turn in 1942 Axis High Tide campaign. Let's take a look: 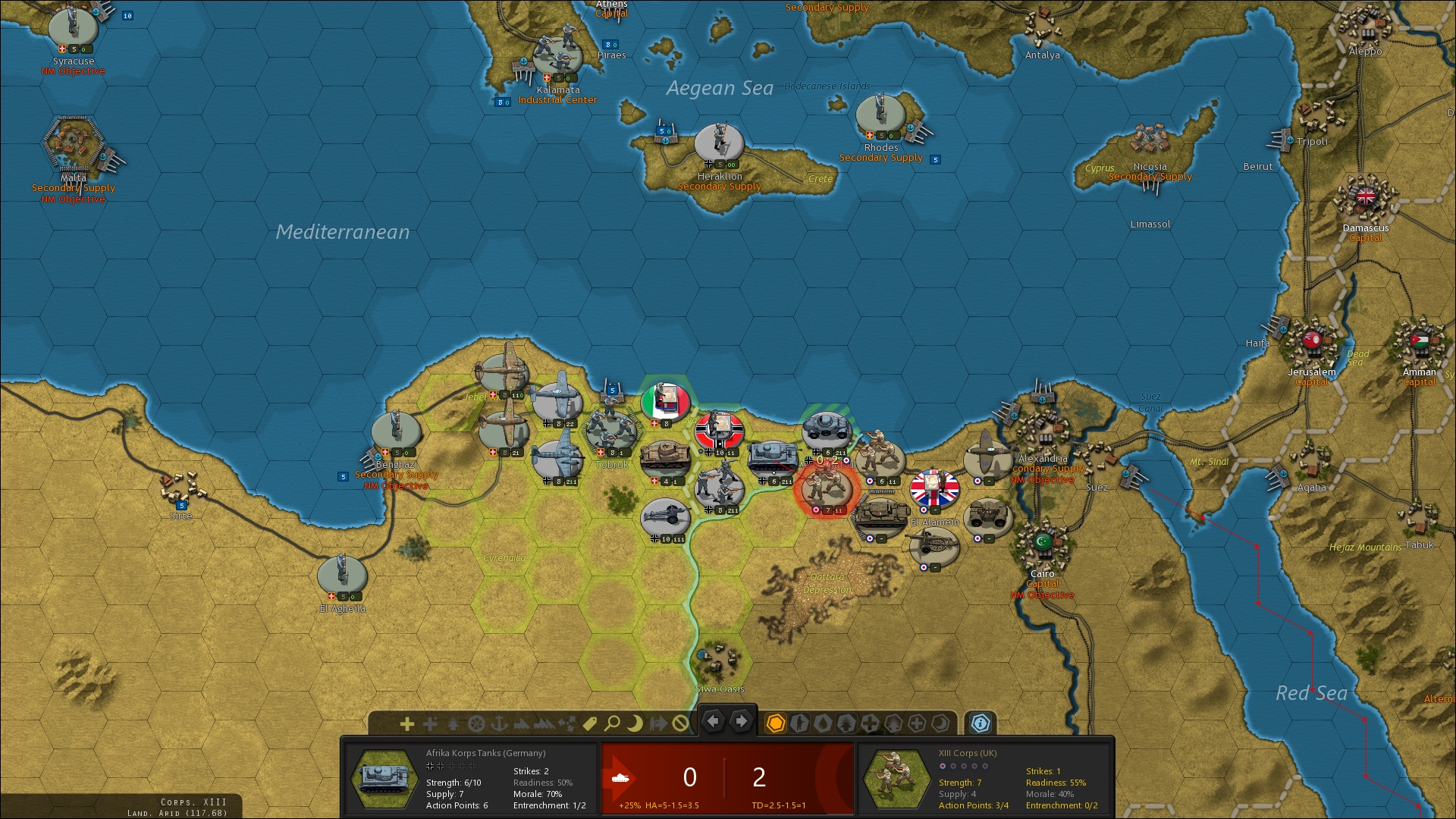 Afrika Korps Tanks are not attached to HQ - Rommel HQ unit is not highlighted. Therefore, readiness of these tanks are only 50%, and their odds against XIII Corps are 0:2 in their favour. 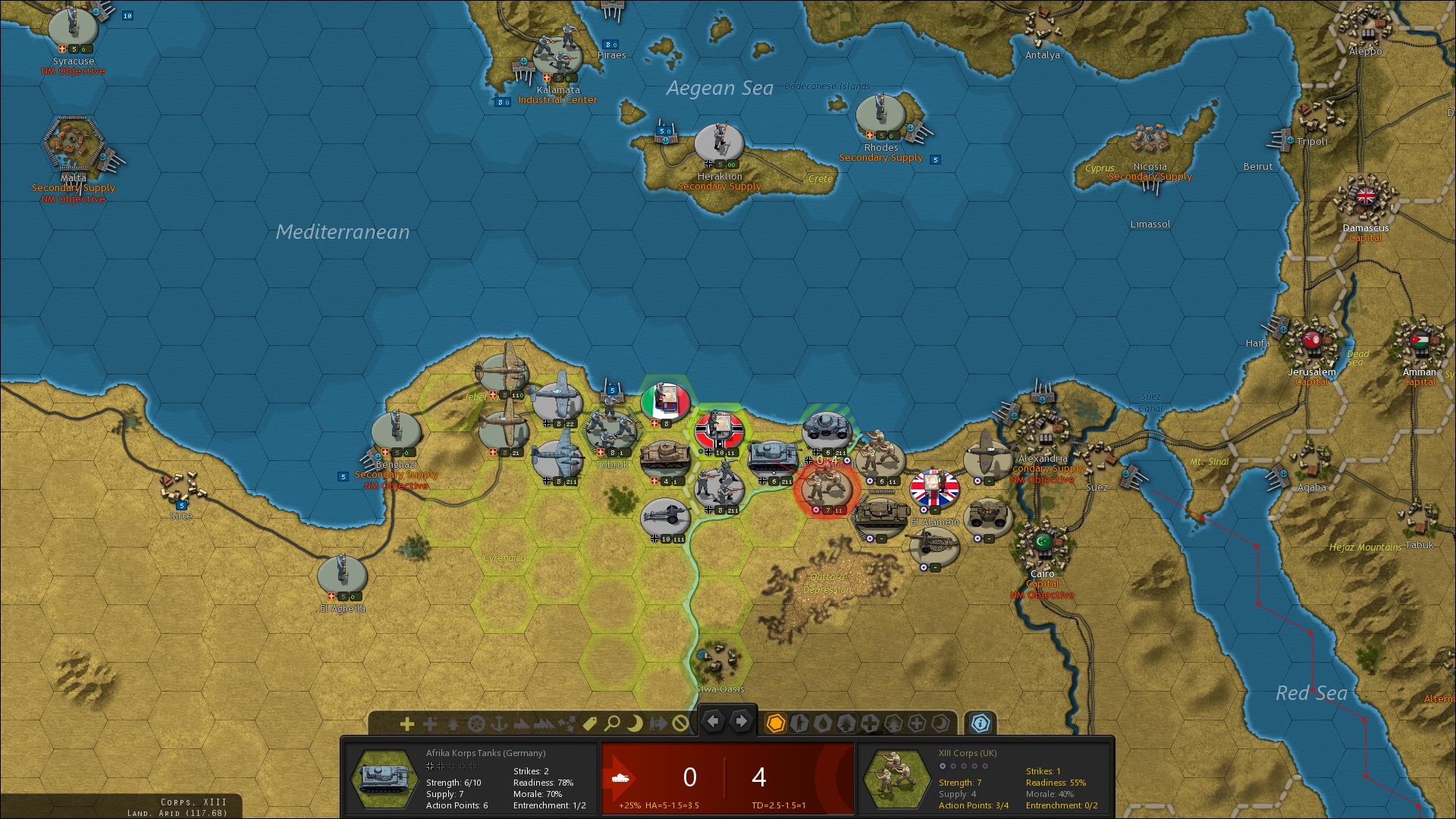 One may argue that 2HP here and there are meaningless. But in SC:WaW you will fight hundreds of battles like these in one game. All these additional HP's taken will add up, enemy will lose more MPP's and you will achieve victories faster. And attaching units to HQ's costs nothing, so why not use it?

Bonus to readiness granted depends on HQ rating and its experience. Rommel has a very high rating of 9, and has additional experience dot, so his comabt boost is significant. Weaker generals (Lord Gort, I see you) will not make such a difference - but it's still a gain.

You can use attachments in three modes:
As soon as you switch HQ to Auto-Assist Mode (Right click HQ->Set mode), just select this HQ and you can change attachments via right clicking on units: 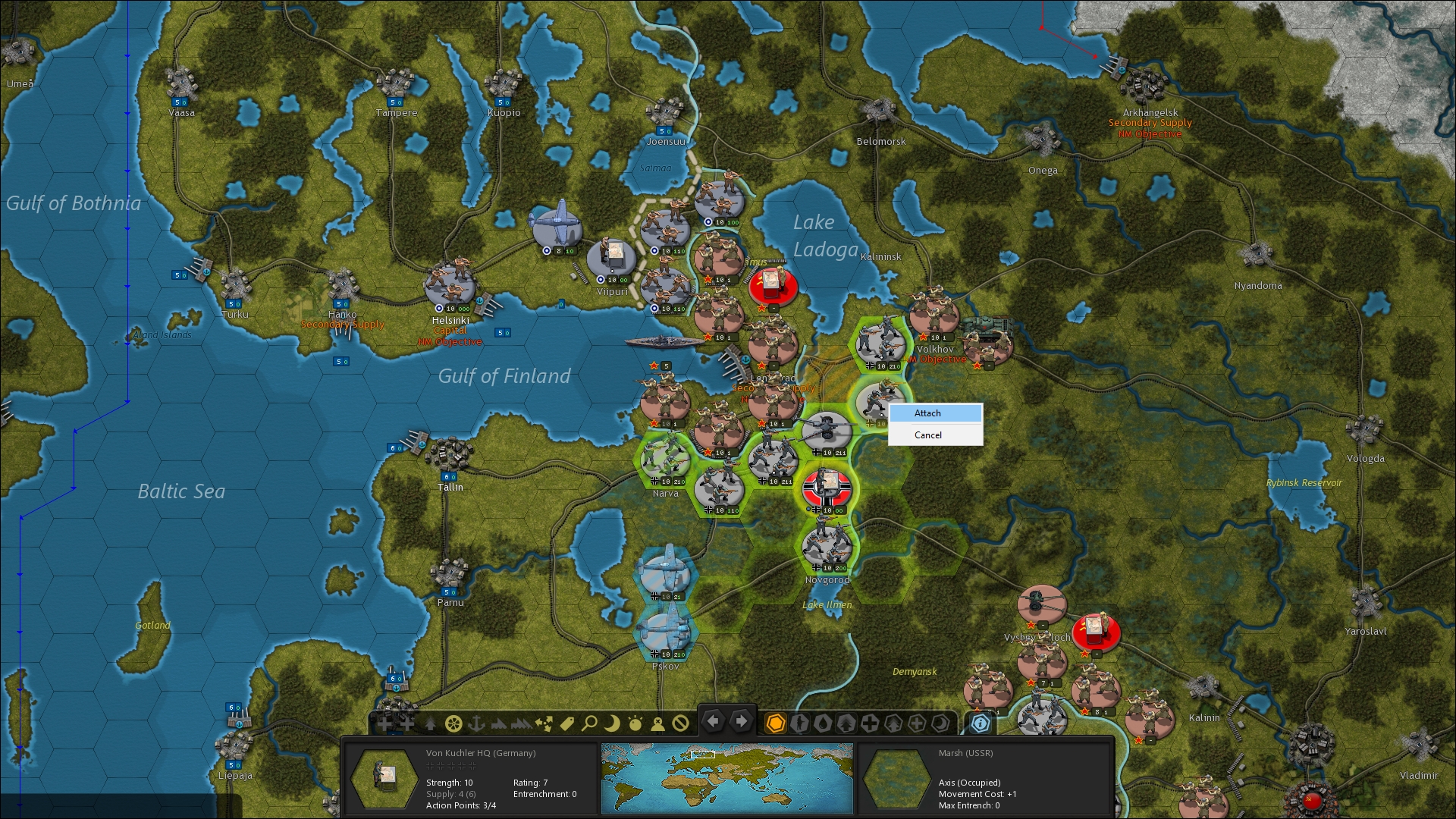 2. Keep supply high
Supply is probably the most important mechanic in SC:WaW. It's a very complec topic and deserves guide of its own. But ultimately there is only one thing you should care for:
High supply is good. Period.

Supply influences your units in several ways. First of all, it directly affects morale, it's a part of formula actually (p.166 Manual). And morale is a part of formula for combat readiness. Point is simple - high supply equals to high morale, which translates to better fighting ability. Secondly, units which are supplied well (supply above 6), can be both reinforced fully and upgraded. And lastly, if a unit with supply 5 or more is destroyed, you may rebuy it only for 60% of original price.

How do you keep supply high, especially in enemy territory, where towns, cities etc. don't grant full supply bonus? Do you remember which unit is the most important in the game? Exactly - HQ's. 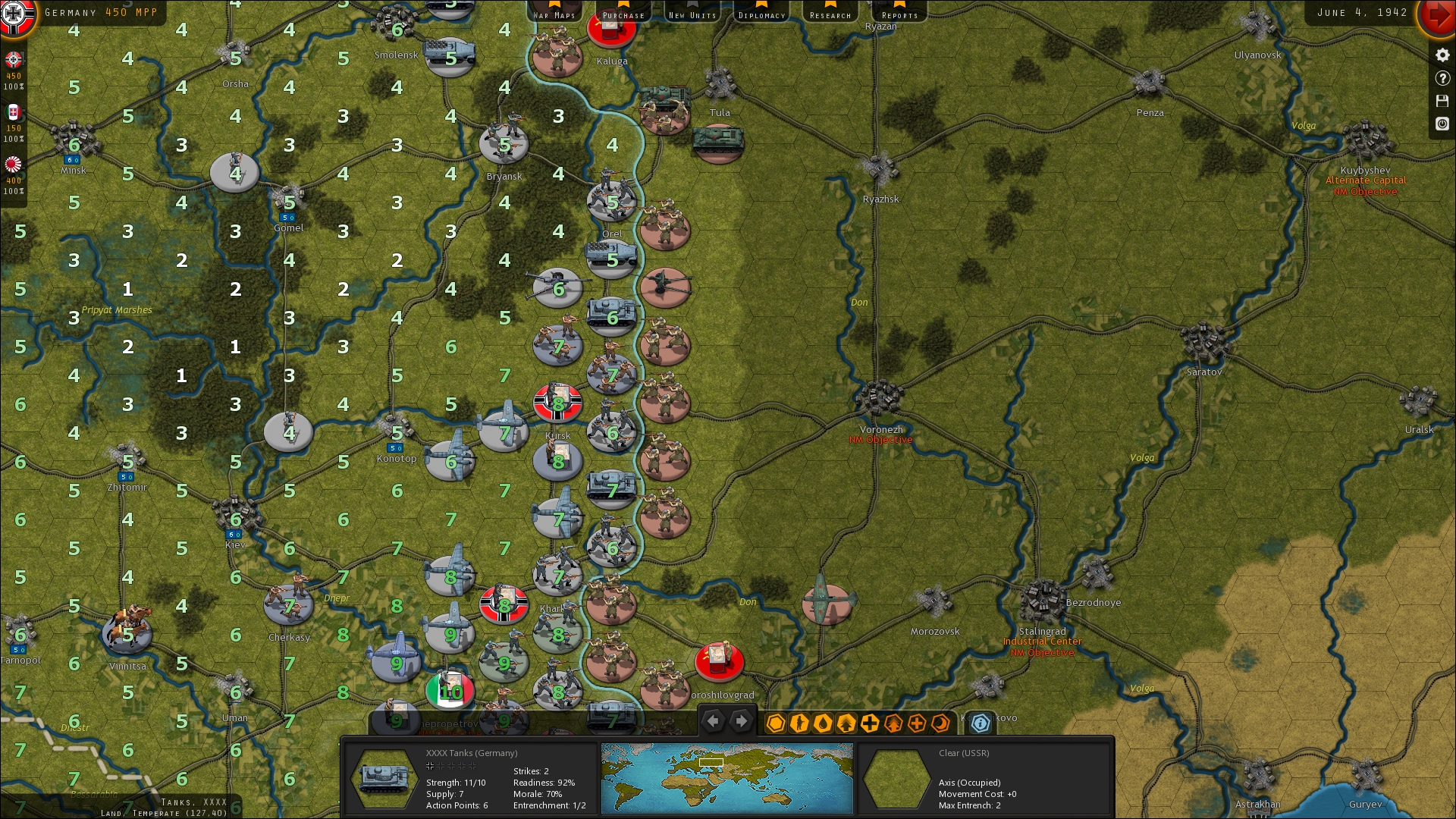 City itself grants 5 supply, but GER HQ there boosts this number up to 8. SW of town there is a XXXX Panzer unit, with 92% readiness and 70% morale.

Now let's remove those HQ's close to Kursk from the frontline. Expected supply in the next turn drops significantly, to 5 for aforementioned tanks. 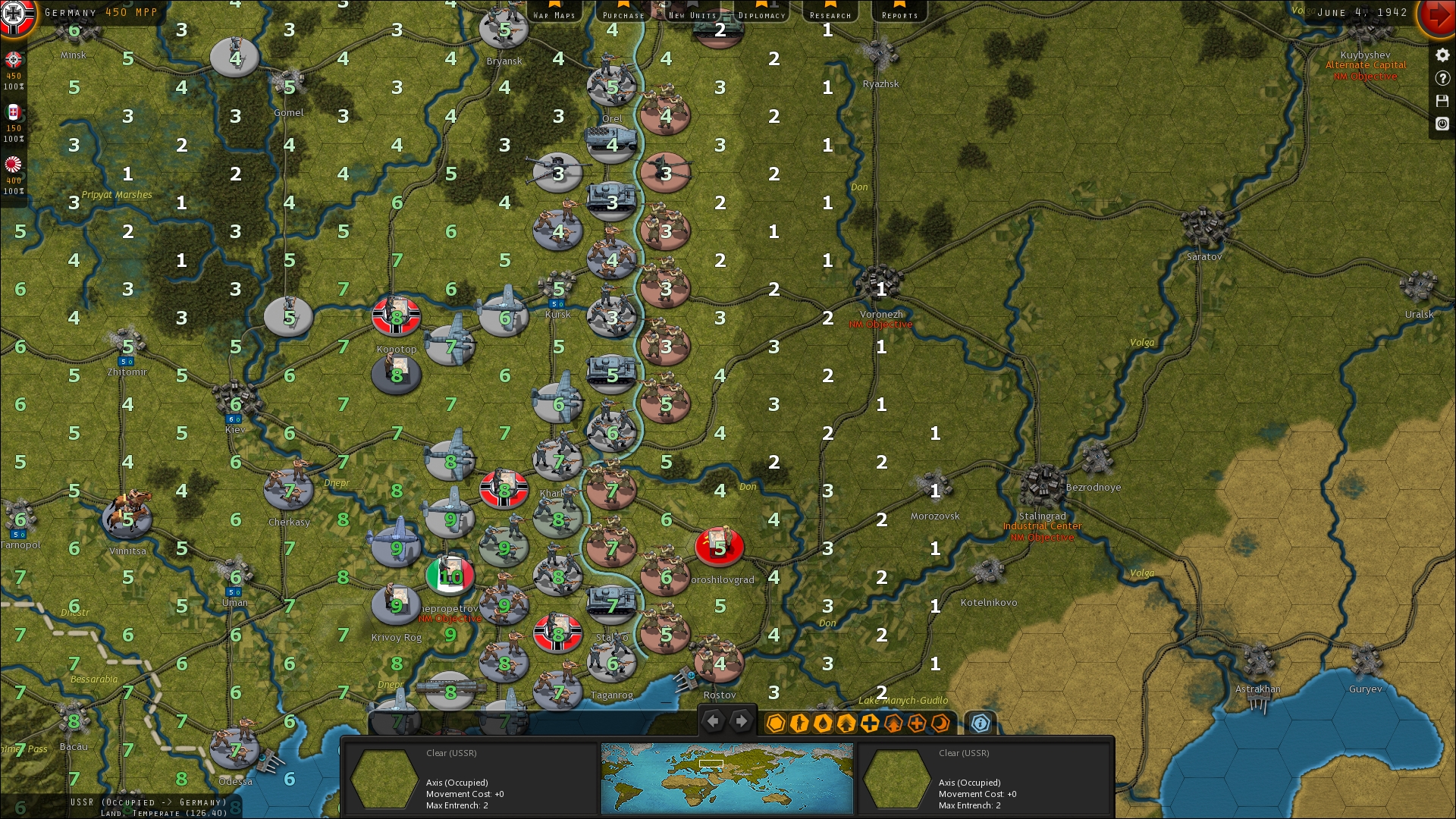 So does the tank's stats, down to 85% and 67% respectively. It may seem not that much, but across whole game small differences accumulate. What is more, if this tank got depleted in combat, his morale would need a lot of turns to come back to good shape.

All tips above only scratch the surface, but you really don't need to know a lot of "stuff" to play the game at reasonable level. Just:
1. Keep supply of your units high. Use HQ's for this and keep your soldiers reasonably close to supply sources,
2. For the enemy side, it's quite opposite. Attack/besiege their resources, cut road and rail connections and attack HQ's - aka make everything to lower opponents supply.
3. Look at charts
Charts give you an invualuable asset in each war - information. If you read them well, they will give you a lot of info about enemies. Examples are as follows:

1. In what shape is their economy? How much do they earn?
2. Do they research a lot, or maybe focus on buying units?
3. Did they undertake any diplomatic action?
4. Which units did they buy?

And many other. Answer for this questions require some game knowledge, for example technology costs, or which units do enemies get for free. This comes with experience. Below I will show some classic examples.

1. German early game
Assuming Germany refunded some techs (Rockets, AntiTank) in the first turn, they can buy an additional unit. Allied player may check it at once in MPP chart: 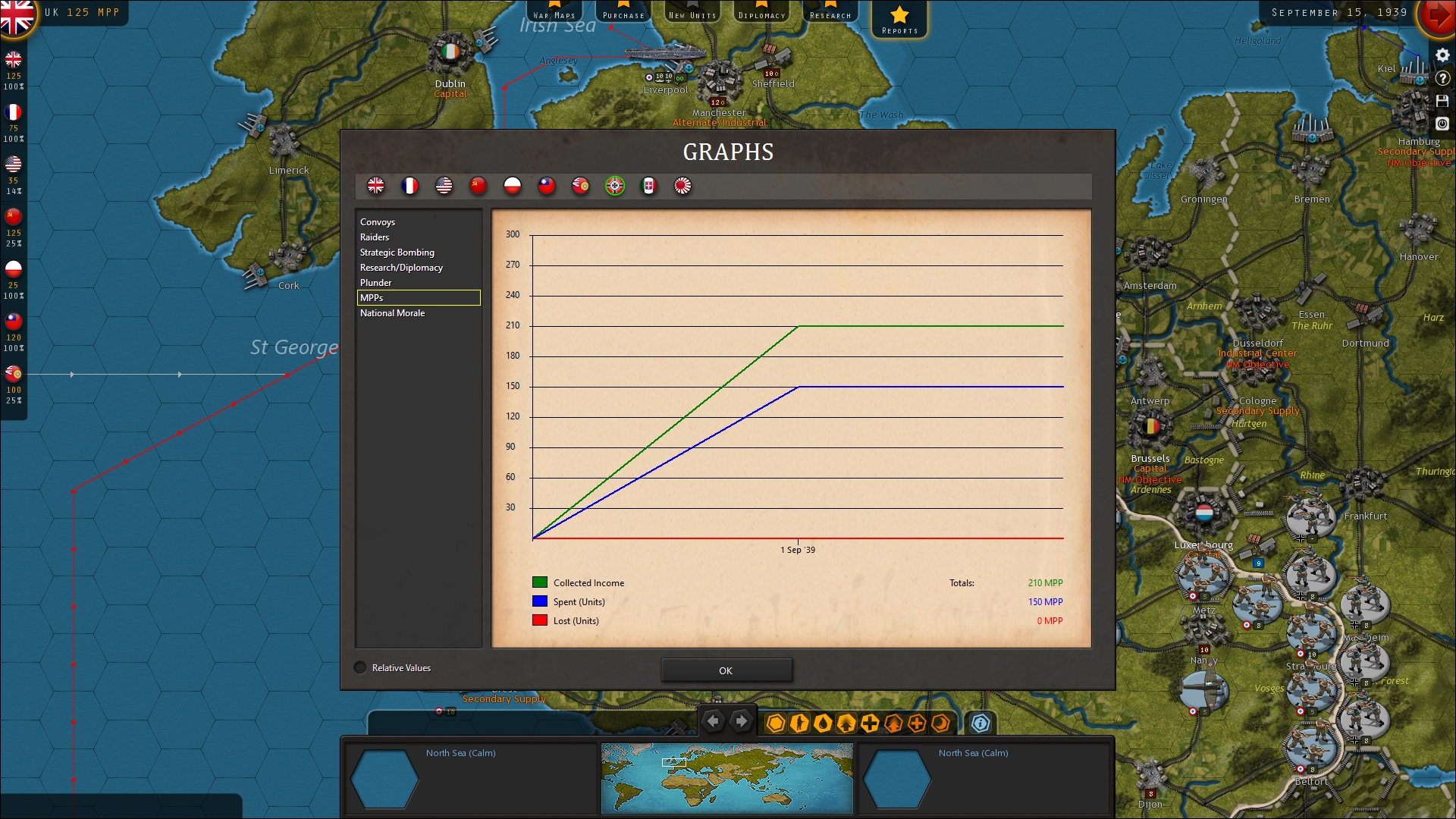 We see that Germany spent 150 MPP for a unit. Then we may check a "Purchase" tab and see, that a Maritime Bomber with naval upgrade costs exactly 150 MPP. If bought in September, it should arrive on 16th of February. To confirm this, we check units Tab on Allied turn after 16th February (01.03.1940 actually) to see, how much aircraft Germany has. If it's 7, bingo, it was indeed a Maritime Bomber. Our navy must be a little more cautious from this point on, because these planes can bring a lot of pain.

Of course Germany could spend these 150 MPP's on other things, like operating units and upgrades, but using charts you may figure it out after some time. You should be especially alarmed if you see an even number which resembles unit cost. In this example it was Maritime Bomber for 150, but for 190 MPP's you may get a paratrooper or rocket artillery. Again, to confirm this, check if land unit count for Germany got unusually higher in opening turns of the game

2. Uber diplo?
Let's take a look on another screen: 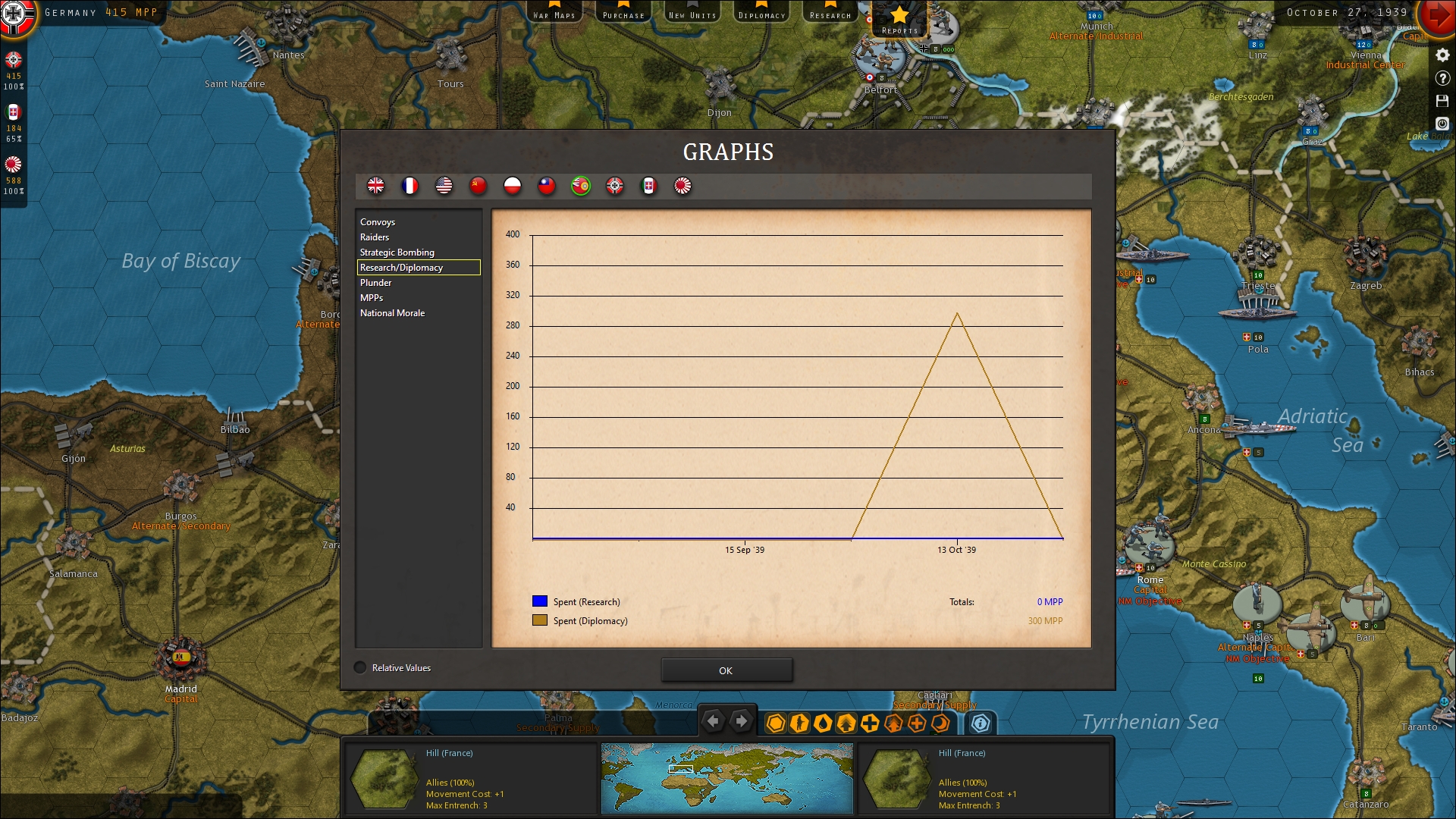 An interesting case, in a second turn of the game India spent 300 MPP on diplomacy. Short investigation time. India has only two diplo chits on its disposal. Chits cost 50 MPP's for a minor, or 150 MPP's for a Major country. Therefore it's clear they spent 2 diplo chits to influence a Major Country. There are only 3 options available - Italy, Soviet Union and USA. Italy joins usually around Spring of 1940 and influencing it would postpone it for about a turn - not a good deal for 300 MPP's. So it's probably SU or US, and both are good choices - if there's a diplo hit early, this will result with a lot of additional MPP's during war preparation time. Axis player must be wary of this, and may even decide to invest in (counter)diplomacy too.

There are many more examples of course. Using charts should become a second nature to you, because it may reveal a lot of info, which normally would be hidden under fog of war.
4. Summary
There is of course a lot more to SC:WaW, like mentioned in the beginning. But all tips mentioned above should be very beneficial. This a kind of fundamental knowledge, that will serve you each game.
Thank you for reading. If you have any questions, please use comments section. Happy warmongering!