Store Page
Rust > Guides > hops's Guides
This item has been removed from the community because it violates Steam Community & Content Guidelines. It is only visible to you. If you believe your item has been removed by mistake, please contact Steam Support.
This item is incompatible with Rust. Please see the instructions page for reasons why this item might not work within Rust.
Current visibility: Hidden
This item will only be visible to you, admins, and anyone marked as a creator.
Current visibility: Friends-only
This item will only be visible in searches to you, your friends, and admins.

Support me & the guide!

Comments
Support me & the guide!

Introduction
Introduction to Raiding Quick Sheet
This guide is designed to be easy-to read and access, feel free to either open this guide whilst in-game during a raid to quickly see cheapest raiding methods or if you run out of the main explosives, finding a method with the resources you currently have available.

My Guides
Check out my other guide, the most updated and detailed Rust Raiding Quick Sheet! You can quickly access all my guides by giving them a Favorite which pins my guides as well as a Like and Award to let more people see the guide and to show your support by helping me directly.
https://steamcommunity.com/sharedfiles/filedetails/?id=2026830012
Building & Basic Raid Costs
Cheapest Building & Basic Raid Costs 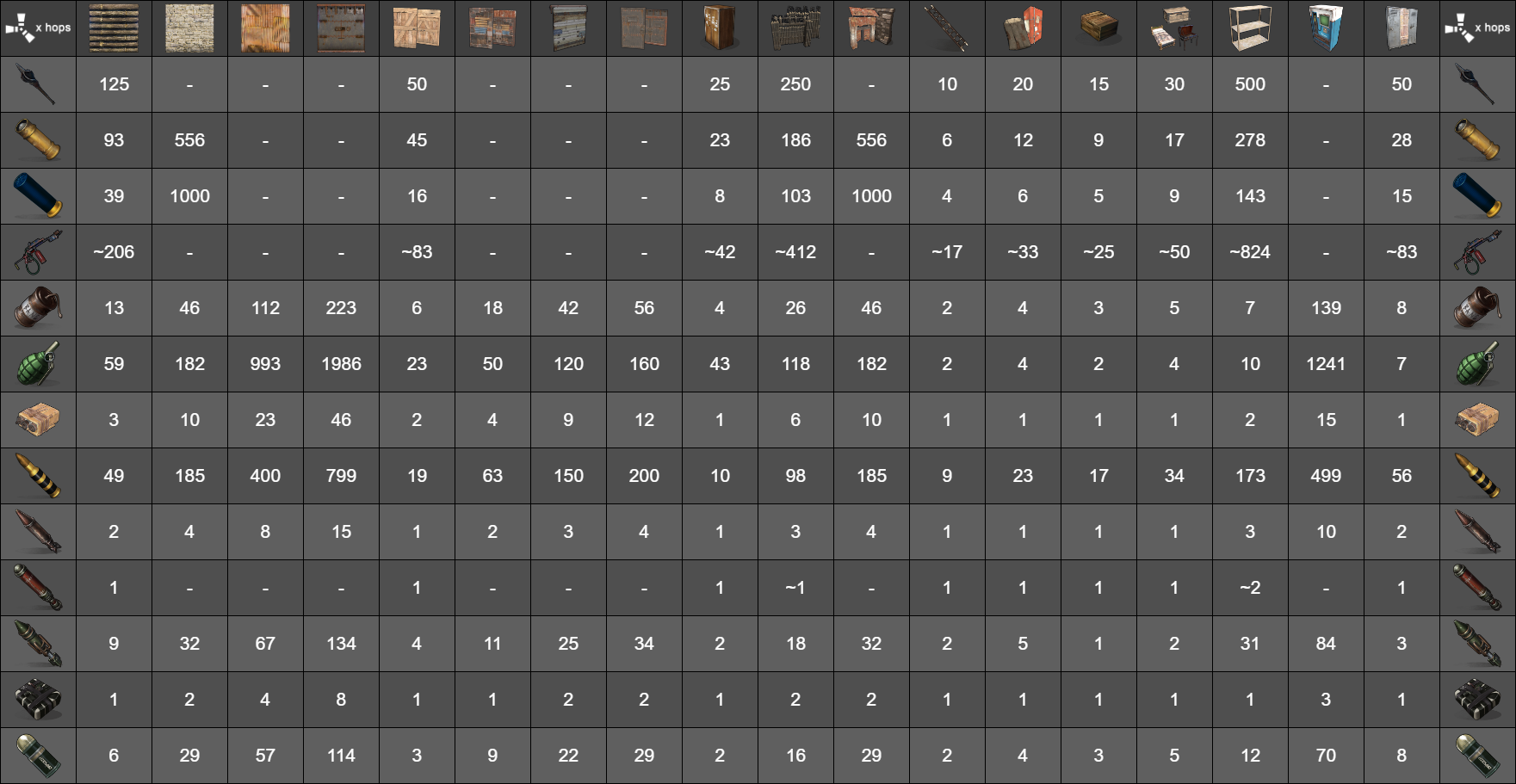 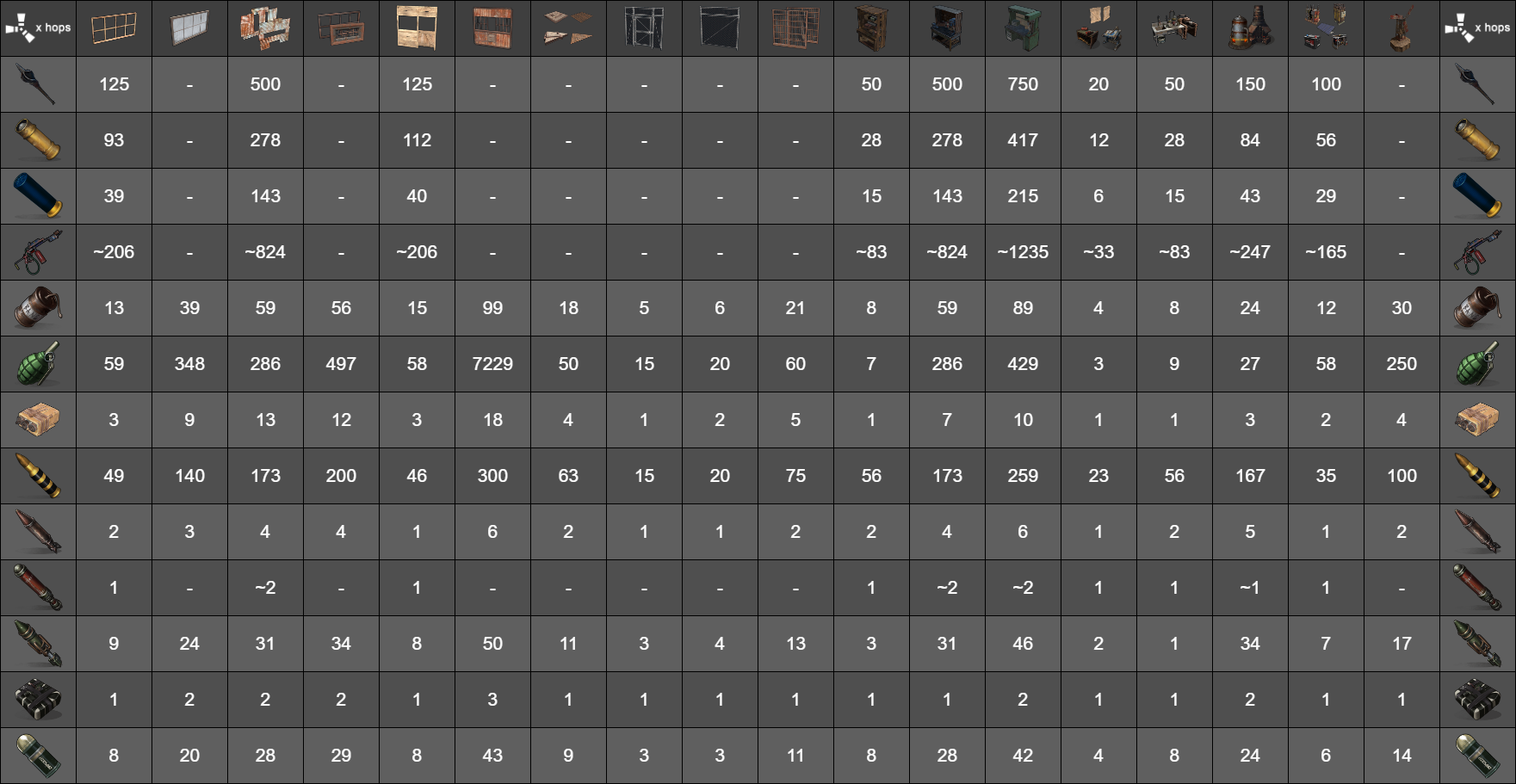 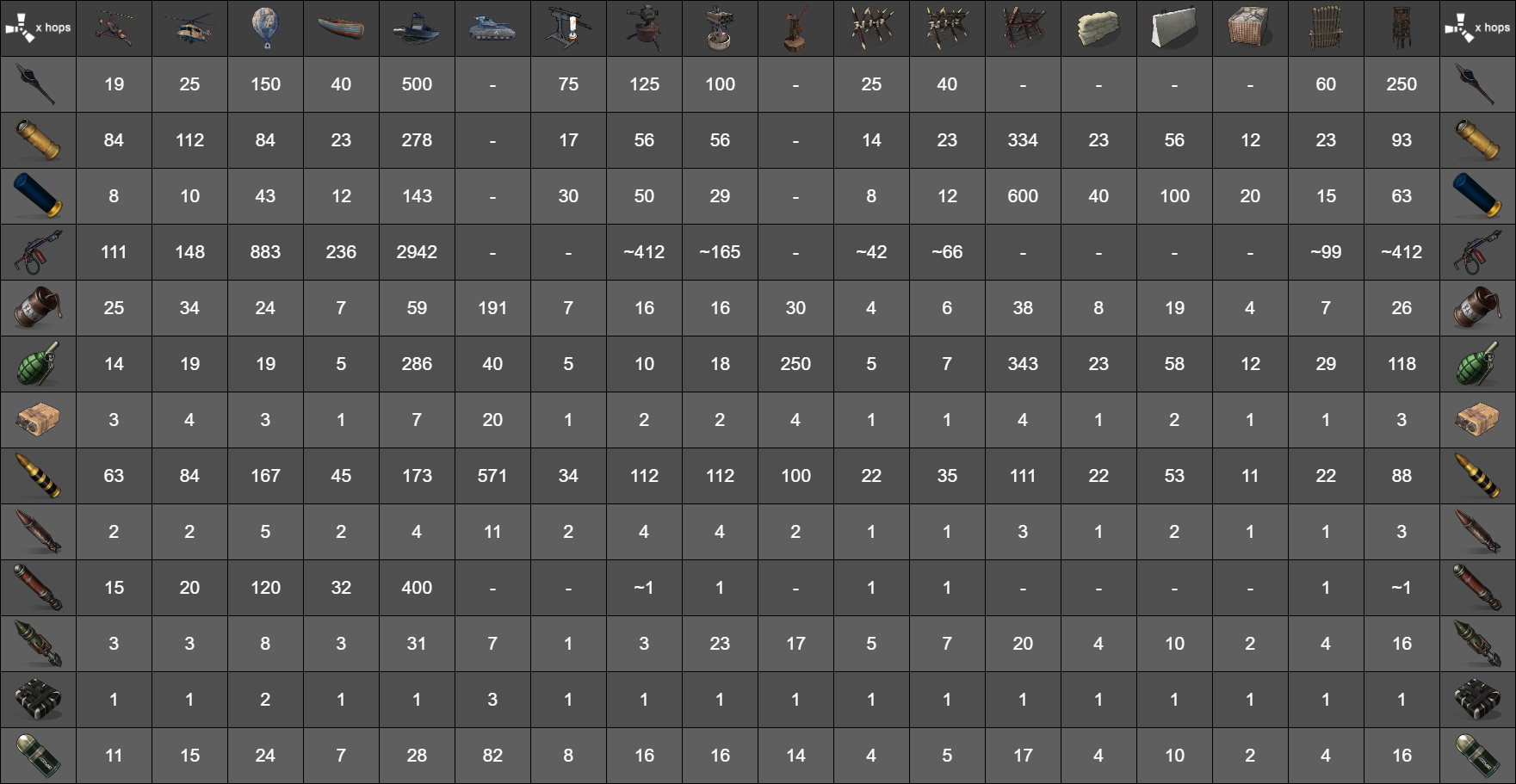 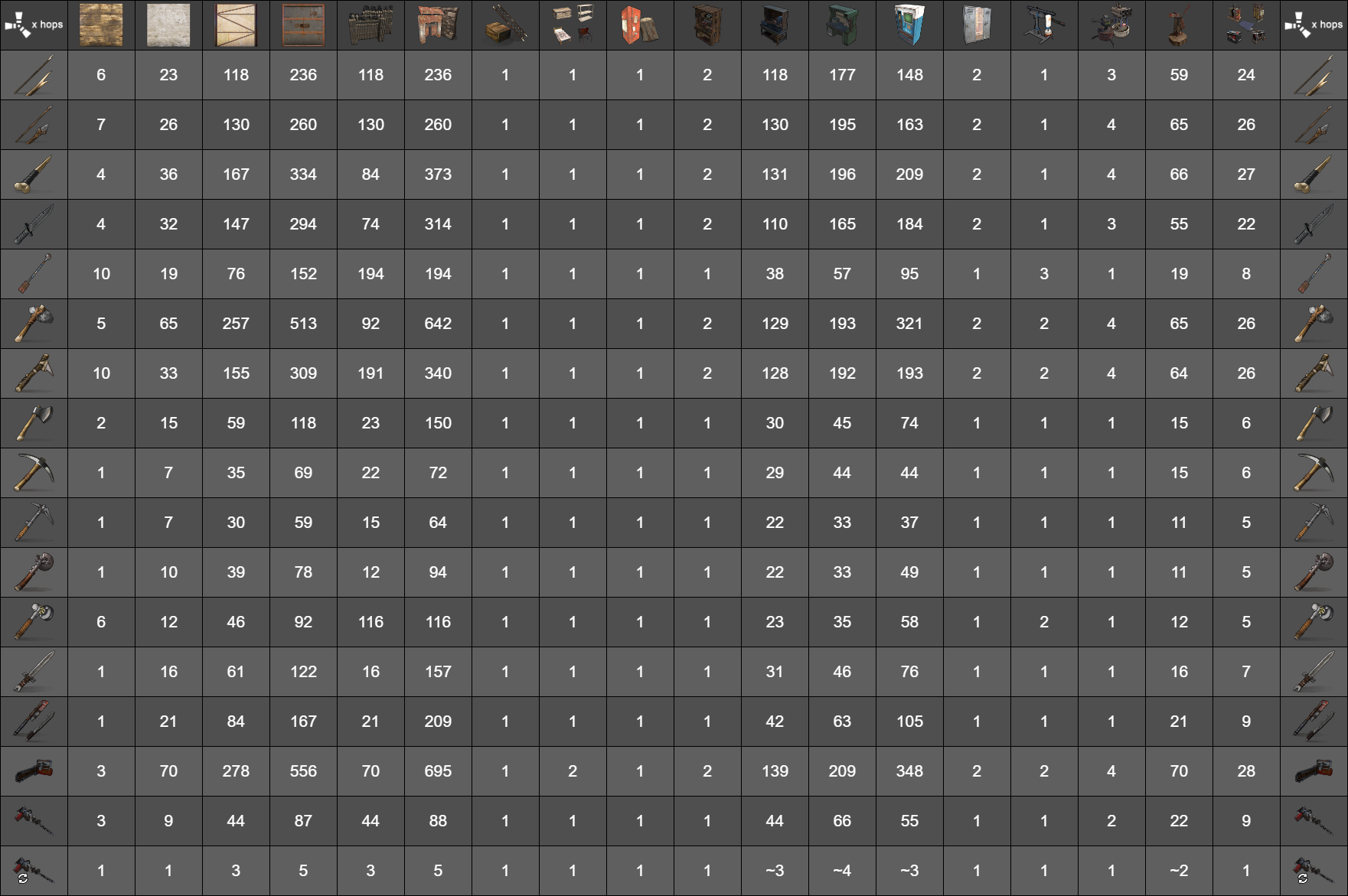 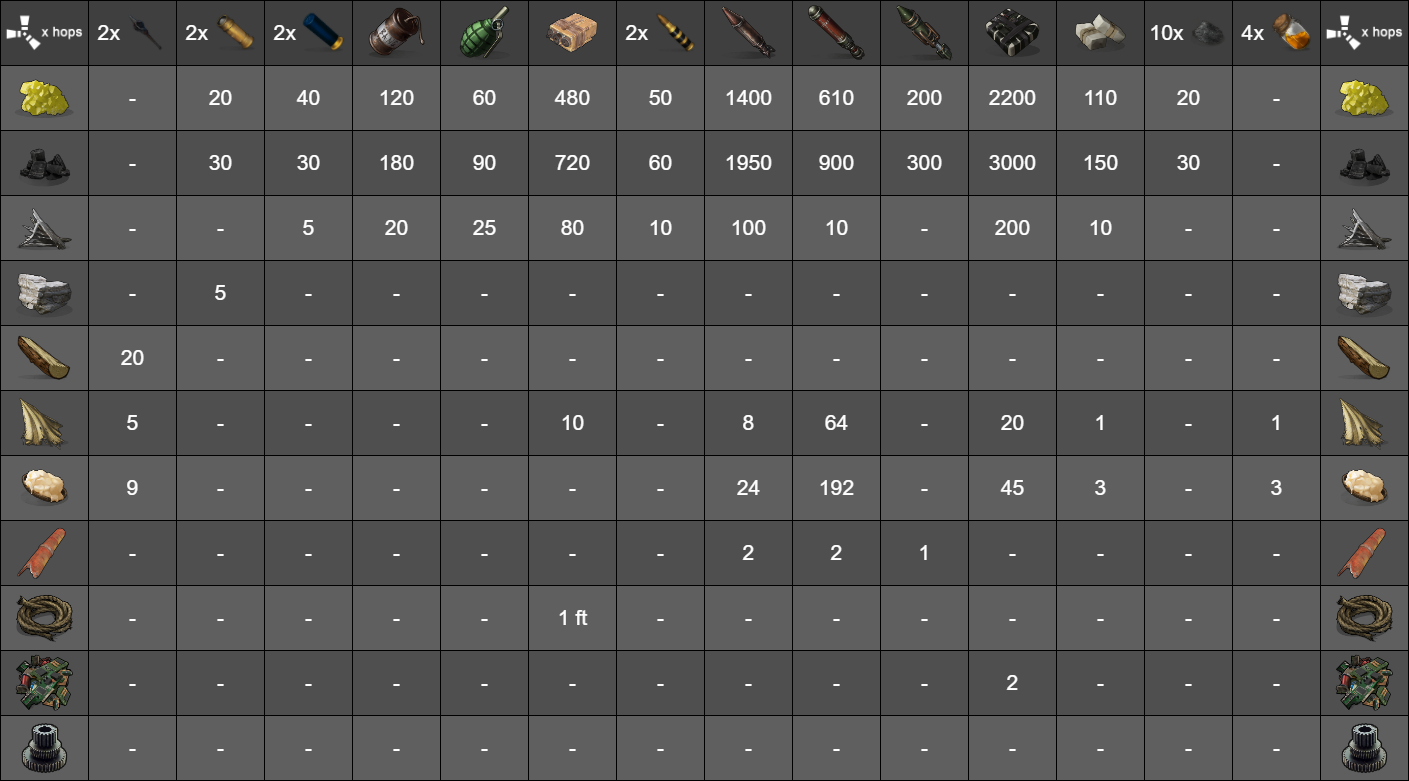 Frequently Asked Questions
Is there a way to download all of the Quick Sheets?
Quick answer, no. This is to dissuade anyone from stealing the content and claiming it as their own. Of course, you can still save the images by right clicking and people will still attempt to steal my content for uses other than personal which will result in me swiftly sending a legal DMCA Takedown.

What does the ~ symbol mean in some of the values?
The tilde (~) is used when a value is not certain, is it an approximate as especially when raiding with fire, Flame Throwers, Incendiary Rockets or the Jackhammer, the values can be random. In the Jackhammer's case, it depends on how you use the tool as some ways reduce durability but can take longer, so it's safer to approximate than write several different values.

Why does the Cheapest Sulfur say ... when melee is better?
The cheapest section is exclusive to sulfur only, meaning any method such as flame raiding or fire arrows potentially being the cheapest way are not listed as they do not require sulfur. This information is useful, for example Salvaged Shelves which the cheapest method by using sulfur is 10 F1 Grenades, however, it can also can be destroyed in 10 seconds with a Combat Knife and even faster/cheaper with other melee items. In situations like these, use the Jackhammer as a universal indication of the amount of melee items you need to break an item.

In the 'Cheapest Costs', I do not raid with Handmade Shells or Incendiary Shells, what is the 2nd cheapest?
Both Handmade Shells and Incendiary Shells are used in extreme cases when all alternatives are either double the sulfur cost or when either of these options are so fast that the extra sulfur cost is not worth. In cases like these where you do not have access or like raiding with either, use Explosive Ammo as they are usually the second cheapest closely tied with Satchels so use either of the alternatives.

When using Handmade Shells, Incendiary Shotgun Shells or Explosive Rounds it takes less than the value listed, is the guide wrong?
No you're right to an extent, some guns have damage differences when raiding usually to compensate the large reduction in time it takes to destroy a target. One example is the Spas-12 Shotgun, when breaking a Stone Wall it takes 185 more Handmade Shells than all other Shotguns, however, it is 4 and a half minutes faster than the 2nd fastest and 27 minutes faster than the slowest shotgun. The reason the guide is not wrong however, is that I take the highest value (excluding the Spas-12 which has drastic ammo differences) which only saves you explosive ammo and not making you need more than written.

I also created a table below detailing each weapon, it's ammo needed to destroy a target as well as the time taken to destroy a target. The information will be in percentages so if you wish to calculate per scenario, convert the percentage to a decimal (95% = 0.95 or 115% = 1.15) and multiply that by the ammo needed listed in the guide, which is 100%.

Weapon
Ammo Needed
Time Taken
Eoka Pistol
100%
146.2%
Waterpipe Shotgun
100%
245.5%
Double Barrel Shotgun
100%
163.6%
Pump Shotgun
100%
100%
Spas-12 Shotgun
133.3%
85.5%
Stolen Guides
List of Stolen Guides
Several people have stolen parts of this guide, both blatantly just trying to get clicks off other people's work and others who have tried to disguise their theft and blocking my profile as well a deleting comments so viewers don't see people calling them out. So I have decided to list all guides that purposefully stole content, still have stolen content trying to get clicks and evidence that shows the content is stolen.

Feel free to inform me on any guides that are stealing my content, comment on a stolen guide showing awareness to viewers and try to get in contact with owner telling them to take it down.

GARREEF's Guide - MARCH 2021 [RESOLVED]
GARREEF agreed to take down his guides and we have come to an understanding, despite resolving the issue, I will keep the evidence on this guide in order to discourage anyone attempting to plagiarise the guide in the future.

xTalius's Guide - JUNE 2021 [RESOLVED]
xTalius also agreed to remove the guide and did not mean to claim the guide as his own, simply for personal use and we have sorted the situation. Again I will keep the evidence on the guide, however, xTalius was not at all attempting to actively steal and was very understanding in DMs.
https://steamcommunity.com/sharedfiles/filedetails/?id=2511072455

Final Statements
Thank you for reading up to this point, I hope you enjoyed my guide on the cheapest and all raiding methods. I have spent several months working on this raid cost guide creating, updating and refurbishing to make it as readable and up-to date as possible.

If you want to support me and therefore this guide in the future; please Favorite the guide to quickly access the raid costs quick sheet, drop a Like and leave an Award to support me directly or drop a comment with a suggestion for a useful feature or item, a question you need answering or just to talk.

I have solely created all available resources and inputted the information for this guide. All images used in the guide have been created by hops and only to be used within this guide as they are legally my own, which means using any images within the guide elsewhere in Steam is breaking copyright laws and the Steam Steam Subscriber Agreement (Steam Online Conduct), breaking these terms will result in a DMCA strike as seen by the other thieves above.
< >
33 Comments

hops  [author] Jun 10 @ 5:10am
That was posted 2 days ago, you cannot reasonably expect me to refresh or consistently scroll through all guides posted to Rust. Anyways I appreciate you bringing it up I will first get into contact then DMCA if they refuse to delete the guide.

i love how you can do me for copyright , when this is another example. off "your apparent work"

hops  [author] Mar 18 @ 3:28am
The issue with workbench levels is that seeing satchels and beancans both being the cheapest, they would have to calculate the costs to see which one is actually the cheapest. I could do two different efficient raid costs for early and late game but there would be confusion with if the early or late game is cheaper with them both claiming to be "the cheapest".

Ferdinand Mar 17 @ 8:07pm
I think one way to improve this guide is to add efficient raid costs according to available work bench level.