Store Page
Crusader Kings III>  Workshop > Princess Stabbity's Workshop
This item has been removed from the community because it violates Steam Community & Content Guidelines. It is only visible to you. If you believe your item has been removed by mistake, please contact Steam Support.
This item is incompatible with Crusader Kings III. Please see the instructions page for reasons why this item might not work within Crusader Kings III.
Current visibility: Hidden
This item will only be visible to you, admins, and anyone marked as a creator.
Current visibility: Friends-only
This item will only be visible in searches to you, your friends, and admins. 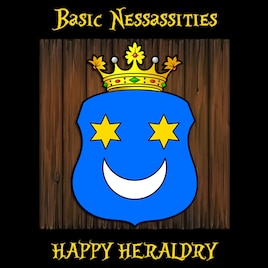 This item has been added to your Subscriptions. Some games will require you to relaunch them before the item will be downloaded.
In 1 collection by Princess Stabbity
Team Nessassity - Crusader Kings 3

2 items
Description
QUARTERING BE GONE!
Are you bothered by the cruel and unusual violence that the game inflicts upon your dynasty's Coat of Arms when someone forms a cadet branch?
Do you squint really hard when you see a massive inconsistency between pre-made houses and gameplay-generated ones?
Does the application of Euro-centric heraldic conventions across the entire world keep you up at night?

If the answer to any of the above is "yes"... then you put a lot more reasoning into it than I did!

I just wanted my CoA to be pretty! ┐(￣ヮ￣)┌

FEATURES
COMPATIBILITY
REQUIREMENTS
RECOMMENDATIONS
Be sure to check out other mods by Team Nessassity!

Ever felt like writing medieval vampire fiction? Are you interested in helping us flesh out some events in our upcoming supernatural CK3 mod Veiled Realms? Or would you perhaps like to work with Team Nessassity on a regular basis? Be sure to check out the Veiled Realms Community Writing initiative!

Princess Stabbity  [author] Aug 31 @ 6:04am
Good news! The usefulness of this mod is slowly nearing an end as Paradox is finally releasing a proper CoA designer

SupercanelP085 Jul 24 @ 2:31pm
@Princess Stabbity
I will try to find out how, never uploaded anything so far to the Steam Workshops

Princess Stabbity  [author] Jul 23 @ 5:11am
@SupercanelP085: Thank you! However, we don't incorporate translations directly into our mods (we can only update the English locs by ourselves so they're difficult to maintain in the long run). Would you be able to upload it to Workshop in a similar way to the Korean patch?

SupercanelP085 Jul 23 @ 2:02am
@Princess Stabbity
I have made a german localization

Please join us and let's have fun together! (Warning! Princess is new at this, things may break!)

Princess Stabbity  [author] Jul 2 @ 12:34am
@♛Darius: I believe it's already in. We added that function in March