Store Page
Garry's Mod >  Workshop > Speedy Von Gofast's Workshop
This item has been removed from the community because it violates Steam Community & Content Guidelines. It is only visible to you. If you believe your item has been removed by mistake, please contact Steam Support.
This item is incompatible with Garry's Mod. Please see the instructions page for reasons why this item might not work within Garry's Mod.
Current visibility: Hidden
This item will only be visible to you, admins, and anyone marked as a creator.
Current visibility: Friends-only
This item will only be visible in searches to you, your friends, and admins.

This item has been added to your Subscriptions. Some games will require you to relaunch them before the item will be downloaded.
In 1 collection by Speedy Von Gofast
SYNTHETIK HUD addons

2 items
Description
Do you enjoy violence? Of course you do! It's a part of you. And who are you to deny your own nature?

This is a faithful re-creation of SYNTHETIK's HUD and fully replicated animations from the original game.

Animations update:
Added a new animations when losing health and armor. A pulse of the last received damage will appear on top of the lost transition.

It also changes the behavior of bottomless clips weapons (rocket launcher, grenades, any weapon that doesn't have magazine). Instead of being displayed as reserve ammo, it will show as a clip counter above the bullet picture. The maximum percentage will be determined by the maximum ammunition carried and will be reset when player dies.

And a third addition is the bars background, it will either occupy the whole with of the HUD or just the health lenght if the fixed armor is enabled. 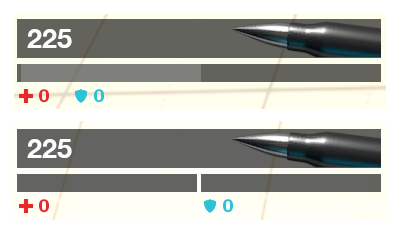 And a last new option added and that bothered some people is an option to change the armor bar background, there are three options available:

Features:
- Animated health and amor bars with smooth transition for gain and loss
- Animated ammo count, every shots will shake it
- Animated magazine count, the counter will translate from right to left as it depletes with a subtle ghost trail
- Animated bullet icon, the animation speed reflects the rate of fire of the weapon
- Different bullets icons for each Half-Life 2 ammo types (custom ammo will display SMG bullet)
- Option to switch to merged health and armor bars together, the loss transition will reflect both of lost health and armor (not in the original game but this is how I started this project, so I kept it)
- Low health alert by red gradient on bottom of the screen (toggleable)
- Customizable maximum HP and AP to display, the bars will be scaled
- Should be compatible to any screen resolution

Console variables:
(Those options can be viewed in your options panel in sandbox)
SyntHud_enabled (0/1): Enable the HUD
SyntHud_separated (0/1): Separate or merge the health/armor bars
SyntHud_lowhp_alert (0/1): Display a red gradient on the bottom of the screen when health is low
SyntHud_max_hp (0 by default): Maximum range of health to display (set to 0 to auto-detect your maximum health)
SyntHud_max_ap (100 by default): Maximum range of armor to display (set to 0 to hide it when you don't have armor)
SyntHud_keep_exceeding (0/1): If the health or armor exceed the maximum set, it will keep the maximum reached until death

Known issues:
The hud animation may be stuck to shaking phase if the framerate is below 20 fps for some reason.

If you appreciate my work and wish to support me you can donate here.[www.paypal.me]
Popular Discussions View All (2)

Description is a Quote
Crystal
< >
129 Comments

𝒩O𝒱𝒜 𝒮𝒯Oℛℳ Sep 10 @ 9:28am
Hello! I am currently trying to dev a Gmod RP server and i am wondering if this is compatible the with the HELIX system?

MR_INSANO Sep 5 @ 12:45pm
this is a master art the better hud of gmod dthe animations is awosome

sharky Jun 20 @ 11:11pm
dont get this mod all the text collides with each other and you cant reload

Verdict Jun 15 @ 8:43pm
Bruh I wanna get the cool ass halo sound effects how do you do that?

Graphiiczz67 May 24 @ 4:25pm
How can I disable the default HUD? Because currently my game displays both HUDs and it doesn't look very good.