Store Page
Tabletop Simulator >  Workshop > Pique Games's Workshop
This item has been removed from the community because it violates Steam Community & Content Guidelines. It is only visible to you. If you believe your item has been removed by mistake, please contact Steam Support.
This item is incompatible with Tabletop Simulator. Please see the instructions page for reasons why this item might not work within Tabletop Simulator.
Current visibility: Hidden
This item will only be visible to you, admins, and anyone marked as a creator.
Current visibility: Friends-only
This item will only be visible in searches to you, your friends, and admins. 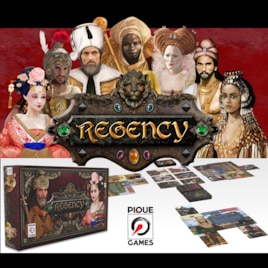 Pique Games
Offline
See all 4 collections (some may be hidden)

This item has been added to your Subscriptions. Some games will require you to relaunch them before the item will be downloaded.
Description
Regency Kickstarter ended on March 12, 2021. But don't fret, there's still time to late pledge: https://www.kickstarter.com/projects/piquegames/regency-game

In Regency players take on the roles of the most (in)famous rulers the world has ever known as they seek to exert their influence over a general populace to amass the greatest fiefdom in all of history. The first player to assemble a complete fiefdom, consisting of six distinct castes of citizens, emerges as the supreme regent.

However, building the perfect citizenry is not as simple as it sounds. As players strive to exercise their influence over a fluctuating populace, rival regents will attract citizens away from the fiefdom where they have taken up residency, whether by allure, by force, or by treachery.

Regency is a civilization-themed, interactive, tableau building set-collection game where players play cards out of hand to exert influence over citizens and to perform actions and reactions. With the addition of each new caste of citizen (including nobles, religious, military, merchants, commoners, and even brigands), new actions become available, thrusting players into an increasingly dynamic and competitive environment.

If you enjoy playing, please rate the game or leave a brief comment over at BoardGameGeek: https://boardgamegeek.com/boardgame/308475/regency