Store Page
Tabletop Simulator >  Workshop > daveh667's Workshop
This item has been removed from the community because it violates Steam Community & Content Guidelines. It is only visible to you. If you believe your item has been removed by mistake, please contact Steam Support.
This item is incompatible with Tabletop Simulator. Please see the instructions page for reasons why this item might not work within Tabletop Simulator.
Current visibility: Hidden
This item will only be visible to you, admins, and anyone marked as a creator.
Current visibility: Friends-only
This item will only be visible in searches to you, your friends, and admins. 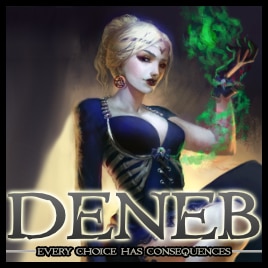 daveh667
Offline
See all 3 collections (some may be hidden)

This item has been added to your Subscriptions. Some games will require you to relaunch them before the item will be downloaded.
Description
Deneb is a tactical miniatures game set in a unique fantasy world. This is the official mod to play the game, and features scripting to help get setup.
​
It’s a skirmish game, but uses a tile grid (with individual tiles that can have built-in rules for elevation and other terrain effects). All movement and measurement are grid-based.

The key mechanics of Deneb center around choice, rather than randomness. A game of Deneb has, at most, two coin tosses for random elements. Everything else is down to player choice.

Lead your strike team from one of the four core factions

--The Tower--
An organisation of powerful mages, skilled at teleportation and wielding the arcane power to destroy their foes and secure objectives.

--The Coven--
A group of witches who exercise control over life and death, and the fury of nature to control the battlefield.

--Ordo Draco--
An elite military order of knights who ride into battle atop dragons.

--The Shadow--
Secretive assassins who often remain unseen up until the moment they seize victory.

Learn more about the full game on the official website https://www.deneb-skirmish.com/
< >
2 Comments

Sir_Charles Aug 17, 2020 @ 11:41pm
At this link you may find a sample how your minis can be improved with a couple of tweak.
https://imgur.com/wigVgh8
Just add me as friend