Store Page
Garry's Mod>  Workshop > Owain's Workshop
This item has been removed from the community because it violates Steam Community & Content Guidelines. It is only visible to you. If you believe your item has been removed by mistake, please contact Steam Support.
This item is incompatible with Garry's Mod. Please see the instructions page for reasons why this item might not work within Garry's Mod.
Current visibility: Hidden
This item will only be visible to you, admins, and anyone marked as a creator.
Current visibility: Friends-only
This item will only be visible in searches to you, your friends, and admins. 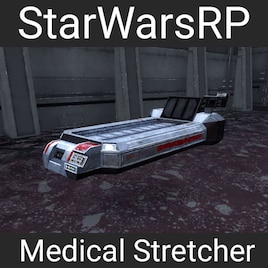 Legend
Online
See all 1468 collections (some may be hidden)

Oh, this addon kinda got a few subs. That's surprising, I've updated the description to better describe everything, along with better credits and mounting the model with the addon itself now. Enjoy.

What this is:
Made for StarWarsRP servers, this addon takes the hospital bed model and makes it a functional stretcher. It will follow you around. I did my best to make it not get all buggy, but standing on it does make it a little upset. It will stop before hitting things, along with maintaining its hover high consistently. If you try hard enough, you'll get it stuck for sure. But if you don't abuse it like a drunk dad it should be alright.

This is just to add some RP to your server with a functional system rather than welding it to stuff. Pretty basic and made in 1 sitting. This addon do be kinda unoptimized tho, you've been warned.

Credits
- The original idea was by Joe, although he was selling it to a limited number of people (10). So once it was no longer obtainable I made another version of it so others could have it.
- The model was taken from this pack. I believe it was ported by its uploader Doctor Jew. The pack contains a lot of cool things and should be checked out in its own right.
- Legend gave me motivation and abused me the whole sitting while I made it. Without him this would not be a thing.

Enjoy the free stuff, it's rare I make stuff free (My nose is very big)

STAHP May 25, 2021 @ 9:42am
@Owain idk what happened but it isnt banned anymore, whatever banned means for an addon