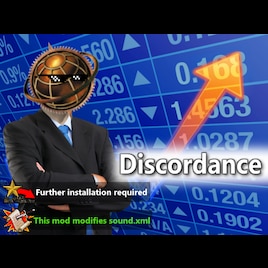 Note: It is suggested (but not required) to install either Interface Icons Fix OR Modernised Emotes alongside this mod. If you do, see the compatibility notes below.

About:
This mod builds on the core functionality of the two mods above, adding 53 new taunts that each display an icon and play a sound effect when used.

Additionally, the British Isles icon fix from IIF/ME is still present in this mod.

How to use:
Because RoN modding be REAL dumb, you will need to install the mod differently depending on whether you exclusively play singleplayer, or if you want to ever be able to play multiplayer without games going out of sync.

For singleplayer-only, install as a local mod:
1) Subscribe to the mod. (doing only this will not load the mod)
2a) Locate the downloaded Workshop files. E.g.
C:\Program Files (x86)\Steam\steamapps\workshop\content\287450\2090862068\
2b) Copy the Rise of Discordance folder into your Rise of Nations\mods folder. E.g.
C:\Program Files (x86)\Steam\steamapps\common\Rise of Nations\mods\
3) Ensure that the mod is loaded and enabled in the Rise of Nations mod manager (accessible via Tools & Extras -> Steam Workshop).

To enable partial compatibility with Rise of Babel, use the RoB-compatible version of sound.xml included in the mod files to overwrite the mod's default sound.xml file. 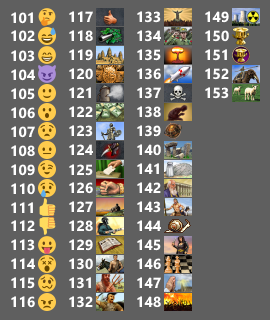 This is a list of what emote each taunt will display, but to hear the audio of each of them it's best to just try them out yourself!

The fixed British Isles icon can be seen by selecting British Isles as your map style in a game lobby.
The new taunts are used in the same way as the default taunts, except using the numbers 101-153 instead of 1-100.

Compatibility:
Other users in your game without the mod installed will not be able to see the (RoD-exclusive) taunts that you do unless they also have RoD.

If using alongside Interface Icons Fix or Modernised Emotes, ensure that RoD has a higher loading priority, as these mods have been designed to be compatible with each other despite all using icon_texs.xml, but it relies on RoD having priority over the file.

Please note that this mod is NOT compatible with other mods that modify icon_texs.xml, interface.xml, or sound.xml except for the two mods listed above. This excludes the partial compatibility it has with Rise of Babel as mentioned above.

Localisation:
This mod includes no written component in chat, and no verbal component in audio, but has not currently been made compatible with non-English language localisations of RoN, as each localisation appears to require a different set of game files. I expect I'll be able to resolve this in a later update, but if you have a particular localisation you'd like prioritised, please leave a comment about it.

FAQ:
Why is it called "Rise of Discordance"?

It's a play on the popular custom taunt pack "Rise of Babel". Discordance was the name of my team in the first Rise of Nations tournament I ever played in, and this mod uses primarily emotes from the unofficial RoN Discord server[discordapp.com].

Okay, but why the thumbnail?

The word "rise" made me think of stonks, so I made the mod's thumbnail custom-stonks.

Why didn't you include <emote from the Discord server>?

I picked what I thought were the best / most useful ones. There are very few audio files left that are either unused or rarely heard that also work for emote sounds that also don't sound like they're part of the gameplay itself. I think the list as it stands is pretty close to the best it can be, but if you sorely miss something feel free to request it and I'll consider it.

Support:
If you like this mod, please consider rating it. If you notice any issues, please let me know so I can fix them!

To support my modding: