Store Page
Tabletop Simulator >  Workshop > Irene's Workshop
This item has been removed from the community because it violates Steam Community & Content Guidelines. It is only visible to you. If you believe your item has been removed by mistake, please contact Steam Support.
This item is incompatible with Tabletop Simulator. Please see the instructions page for reasons why this item might not work within Tabletop Simulator.
Current visibility: Hidden
This item will only be visible to you, admins, and anyone marked as a creator.
Current visibility: Friends-only
This item will only be visible in searches to you, your friends, and admins. 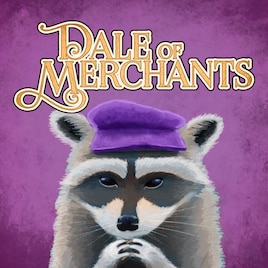 This item has been added to your Subscriptions. Some games will require you to relaunch them before the item will be downloaded.
In 1 collection by Irene
Good board game mods

16 items
Description
Dale of Merchants is a highly adaptive deck building game with animal-shaped traders competing to enter the prestigious Guild of Extraordinary Traders. The game supports 2–4 players and playing time is around 20 to 30 minutes.

Do you give up a chance to use a splendid action in favor of getting even more astounding cards? Since every card can be used in multiple ways, Dale of Merchants requires some tough choices. You can’t win the game without letting go of your cards. Dive into Daimyria and meet the cast of colourful animalfolks!

The goal of the game is to finish up your merchant stall before anyone else. The first player to do so is awarded with the access to the legendary Guild of Extraordinary Traders.

With 27 different decks, the replay value of the game is extremely high. You get fresh gameplay by mixing various decks from game to game. Do you want to play with the Thieving Northern Raccoons, bend the rules with Adapting Veiled Chameleons or bring total chaos with Lucky Ocelots? The first player to complete astounding merchant stall is the winner of the game.

SmileyChris May 2, 2020 @ 2:42am
Took down my older copy from the workshop. Nice to have a complete and officially supported one! GL with the kickstarter, Snowdale!
< >