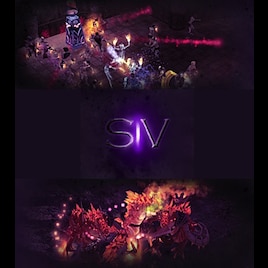 soa
Offline
See all 13 collections (some may be hidden)
You need DLC to use this item.

This item has been added to your Subscriptions. Some games will require you to relaunch them before the item will be downloaded.
Description
/!\/!\/!\ RAGNAROK + ATLANTIS REQUIRED /!\/!\/!\

This mod is based on the Soulvizier mod for TQ : Immortal Throne (v0.98i), and expands it for Titan Quest Anniversary Edition, Ragnarök and Atlantis.

This mod is not for beginners ! It provides challenge.

Items :
- 600+ unique Souls per difficulty level for most heroes/bosses ; they use a ring slot and can have exclusive skills
- New charms & relics including elite charms for elite monsters
- New 1-hand items : wands (like 1h staves) and orbs (usable as a weapon or smaller shield)
- Formulas to create Mythic items (above Legendary)
- Common Vitality and Poison staves (find them on enemies or merchants)
- Mercenary contracts, allows you to summon a mercenary while contract is in artifact slot
- Many new affixes
- Create equipment (weapons, armor and jewelry) with the new forging formulas
- Artifact formulas and forging formulas are sold by merchants
- Experience potions can be created in all acts with formulas

Gameplay :
- Health/Energy Regen depends on your maximum amount of Health/Energy
- Yellow and green rings give a flat Health or Energy Regen as a base bonus
- Some items give increased Weapon Mastery (increased damage when you use these weapons)
- Potion cost and cooldown greatly increased
- More resistance penalties in Epic/Legendary
- Increased player speed

Other :
- New player skins based on nargil66's mod, with dyes sold by deities
- Recycling system with formulas => recycle your unused relics and charms into new ones
- Created hybrid armor classes requiring dexterity/intelligence or Strength/intelligence
- Added flavor/lore text for many unique items based on nargil66’s Enhanced Gameplay mod

In the future, work in progress :
- Adding more content for act V and Atlantis.
- Tweaking the use of the act V forge (infinite use - maybe in every town)
- Expanding the recycle system to recycle MI (trade items ingame with formulas)
- New "elite" maps accessible at the end of Legendary
- Improve boss fights
- Improve drop rates
- Blood & Gore (Death Effects 1.6 Mod)

Warning and Notices
PLEASE READ BEFORE YOU PLAY!
- This mod changes a lot of content from the original game. To ensure the smoothest experience, do not launch any other mod BEFORE or AFTER this one, in the same game session. Do not play a Custom Quest with a “hard mod” version of Soulvizier.
- Only use characters dedicated to the Soulvizier mod. Don’t load these characters into the vanilla game or load a vanilla game character into Soulvizier. you will lose your skill points.
- Do not bounce mods with your Soulvizier characters.
- Do not export exclusive items outside of this mod.
- Play without the required DLCs at your own risk.
- use TQVault at your own risk.
Please respect those instructions to avoid losing progress or causing problems.

Optional - 4GB patch (improve performance)
Use the 4GB patch to allow the game to use up to 4GB of RAM instead of 2. Only works if you have a 64-bit operating system. This can improve performance.
Just launch the patch, point to TQ.exe in Titan Quest Anniversary Edition directory, click Open,and it’s done.
A backup named “TQ.exe.Backup” is automatically created.
Whatever way you launch the game (DX9/DX11), this should work.
Warning : if the game updates, you should reapply the patch to TQ.exe, as the vanilla file may have returned.
You can learn more about the 4GB patch here :
https://ntcore.com/?page_id=371

Credits
- Munderbunny, amgoz1 and others for respectively making the Underlord mod and the original Soulvizier mod for TQ:IT disc version
- nargil66, for many new assets, features, ideas, and general support
- WNG & Torstein159 for new items, new affixes
- Endymion for bug fixes and new content
- Bumbleguppy for some assets (Runes mastery : Rune Golem, Guardian stones)
- All beta testers of Soulvizier AERA
- And more generally, everyone who provided feedback and contributions.