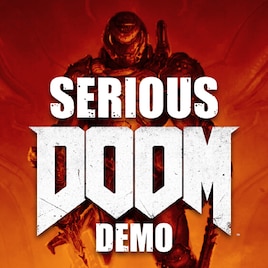 Danny S.
Offline
See all 25 collections created by Danny S. and other people (some may be hidden)
You need DLC to use this item.

This item has been added to your Subscriptions. Some games will require you to relaunch them before the item will be downloaded.
In 1 collection by Danny S.
Serious DOOM Demo

8 items
Description
THIS MOD WILL ONLY WORK 100% PERFECTLY FINE WHEN YOU DOWNLOAD ALL THE 8 PARTS, OWN SERIOUS SAM TFE,TSE AND BFE + JEWEL OF THE NILE AND LEGEND OF THE BEAST, USE ENGLISH LANGUAGE AND DISABLE ALL YOUR MODS.

IF YOUR KEYBINDS DON'T WORK BE SURE TO CHECK IF THEY ARE PROPERLY SET IN THE GAME SETTINGS. THE REASON WHY THEY DONT WORK MIGHT BE ALSO THE FACT YOU DONT OWN ALL THE GAMES.

IF THE GORE/RAGDOLLS DISAPPEAR IMMEDIATELY GO TO YOUR CPU SETTINGS AND SET THE DEDICATED TO THAT OPTIONS.
Rip and tear, until it is done
Serious DOOM: Hell In Egypt is a concept of how the DOOM 2016/Eternal mechanics and assets would work in Serious Sam TFE. The mod has been developed for over 2 years now and finally i was able to create a demo version for the public so that people can do some training and kill time before Eternal itself. This particular version of the mod will not be continued but rather transformed into something even bigger and better when Eternal assets are exportable.

Launching The Mod
This is very important - the mod is a total conversion which means having some mods enabled might break the game completely.

I highly recommend disabling all of your mods since Serious DOOM won't like even the smallest changes, additions, replacements etc..

Mods that SHOULD be DISABLED
- Any mods that have some heavy scripting in it. Serious DOOM runs on 25 scripts which are already affecting performance so watch out.

You also need to own ALL the Serious Sam games and DLCs listed in the requirements.
And obviously you will have to download all of the 8 parts of my mod.

Important Notes
- THIS DEMO HAS NO PROPER SPLITSCREEN AND MULTIPLAYER SUPPORT.

- DOOM assets are very heavy and performance problems may occure for some. I recommend playing with performance options trying to lower down some options. The mod by default forces a few graphical settings for every player everytime the game is started.

- Enemies are able to climb very high without playing any specific animation - problem with the engine.

- Enemies may get rarely stuck.

-
HUD might get messed up due to the fact it's scripted. If it doesn't look like in the screenshots i recommend setting the screen height and widht bars to max values. I also recommend using the 16:9 aspect ratio and 1920x1080 resolution.
- Weapon Wheel is based on the one croteam introduced so you need to click the weapons to select them.

- Third Person view is broken on purpose so no one uses it.

PLEASE REPORT ANY BUGS THAT YOU ENCOUNTER ASAP

Credits, Hall Of Fame
Of course this mod wouldn't become what if not the help and support of plenty of friends and people. You should appreciate their work and help and those are:

- Sacor, who made the Seriously Stupid Remaster on which Serious DOOM is and will be always based. I recommend playing Sacor's remastered SSHD campaigns. He also helped with testing the demo.

- Soulmyr, who did a great job making most of the HUD elements and modifying plenty of different textures. He helped with testing the demo and has been providing feedback for a long time.

- Fiendzy, a very nice and a trustful person who always gets and will get my stuff early to test it out and share feedback.

- Spy's Cr3ed, who helped with making some very nice models like the meathook and plenty of different things i can't reveal yet. He also helped with testing the demo.

- Asdolg, Ryason, Kuber for providing lots of LUA tips and some ready functions. Thanks to them i could script most of the awesome stuff.

- Other1 for helping with getting the DOOM 2016 sound names.

- ID-Daemon and his team for making exporting tools for DOOM 2016.

- Urban, who made the very first DOOM 2016 weapons. Also provided help with testing the demo.

- And many other people who followed the progress of my mod and provided feedback.

All the content in this mod belongs to Bethesda and ID Software. All the credits go only to them.
Eternal's Plasma Gun model is a free to use asset easily accessible on the internet.


Please remember to report any bugs and to share feedback, any ideas or complaints are crucial for me.

If you plan to make a fully fledged conversion for this...
DemetriusJr

Sichovyk Apr 25 @ 1:04am
Can I join to your Discord Serious Sam server? I'm really big fan of your modifications

Danny S.  [author] Feb 4 @ 11:54pm
- Wont do dashing as a standalone mod
- If anyone cant load levels its very likely that you do not own the required games an DLCs listed on the workshop page (The full mods version will just require HD TFE and HD TSE to make it much more accessible tho)
- Wont do resource packs, for now it would be a waste of time i wanna fully concentrate on the mod itself
< >