Store Page
Tabletop Simulator>  Workshop > InterfaceAS's Workshop
This item has been removed from the community because it violates Steam Community & Content Guidelines. It is only visible to you. If you believe your item has been removed by mistake, please contact Steam Support.
This item is incompatible with Tabletop Simulator. Please see the instructions page for reasons why this item might not work within Tabletop Simulator.
Current visibility: Hidden
This item will only be visible to you, admins, and anyone marked as a creator.
Current visibility: Friends-only
This item will only be visible in searches to you, your friends, and admins. 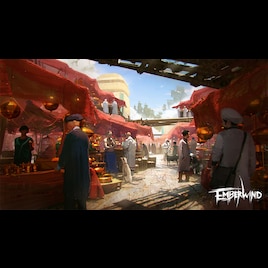 EMBERWIND's modular game engine allows you to combine rulesets to suit the epic Heroes in your party.
The Core engine combines the best elements of our favourite RPGs and video games from the past 20 years, plus some new innovations of our own, all streamlined to make it easy for new players to pick up and for experienced players to dive deeper into strategy and storytelling.

The EMBERWIND Core rules are intuitive enough to learn in minutes, but offer untold depths of strategy through co-op tactics and modular plugins.

We believe that a modular RPG has more to offer players, because players have more to offer each other than a static rules system will allow. That's why we're turning to Kickstarter not just a fundraising platform, but a community of tabletop-lovers.We're looking for your input as we build a community and decide which rules modules to build onto the Core, and release new campaigns, storylines, and settings.

To get your Heroes into the game, you'll either need one of our two campaign book releases, or our free DLC, which includes Foe Cards (monsters you can fight) and Vignettes (playable scenarios), both of which are accompanied by lore stories.

Our campaigns teach players the rules as they play, so no one needs to spend hours learning the manual. Even better, we've made GMs optional, with a branching Crossroads system run by rotating narrators and dynamic party voting. Our combats are driven by a hex-based AI system for Foes so everyone can get in on the action.

For those who love deep dives, the Hero Manual helps you create your own characters. Plus, you can also have one player take on the full-time role of Storyteller and use our campaign books' enhanced Storyteller content for a more immersive role-playing experience with deeper ties to lore.

The Skies of Axia
is our first campaign, released in March 2018. Take to the skies on a life-or-death mission to save Gelspar, the dangling slum district of the great airship city of Adriel. Deadly foes and hidden threats lie in wait around every corner, and it will take every bit of skill and knowledge your Heroes possess to uncover the secret of the hearth crystals and return before Gelspar falls from the sky—forever.

The Songweave Tapestry
takes place on the eve of the Festival of Sparks. The mountaintop city of Summit teeters on the brink of chaos. The scions, a once-extinct order of heretic mages, are on the rise. Rumours say the cult plans to unveil a dangerous invention restored from the age of the Unravelling. As the festival approaches and the city becomes a madhouse of controversy, you find yourself at the heart of a conflict that threatens to tear the city apart.

Nomnivore Games is an indie development studio bringing a fresh, new take on table top games! We also love the community, supporting new developers however we can!