Store Page
Rivals of Aether >  Workshop > Alpha Unit Tom's Workshop
This item has been removed from the community because it violates Steam Community & Content Guidelines. It is only visible to you. If you believe your item has been removed by mistake, please contact Steam Support.
This item is incompatible with Rivals of Aether. Please see the instructions page for reasons why this item might not work within Rivals of Aether.
Current visibility: Hidden
This item will only be visible to you, admins, and anyone marked as a creator.
Current visibility: Friends-only
This item will only be visible in searches to you, your friends, and admins. 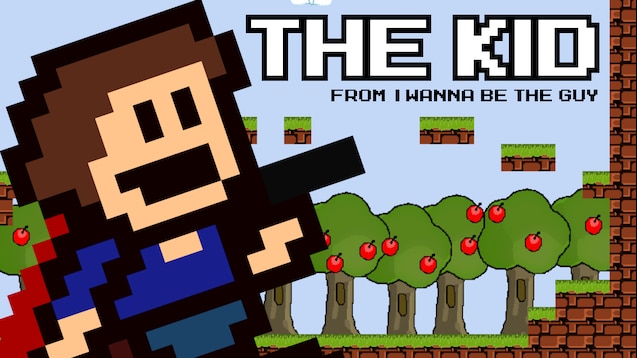 This item has been added to your Subscriptions. Some games will require you to relaunch them before the item will be downloaded.
Description
Think the game is too easy? Want a real challenge?

The Kid plays unlike other characters found within Rivals of Aether. His gun does not do any damage to a players percentage, instead killing players after a set number of hits (which is displayed as HP above The Kid's percentage.) The Kid also isn't well suited for survival, so good luck!

This character works best against single opponents. AI can use the character but will not attack.
TODO and known bugs can be found in the change notes

Sprites from www.spriters-resource.com
Character originally from https://kayin.moe/iwbtg/
I'm in no way related to the character's original creator, fair use and all that!
< >
27 Comments

ShibuNub Mar 5 @ 8:33am
this character makes wonderful milestone fodder, thank you so much for helping me expedite the process

What The Cheick Dec 5, 2020 @ 10:08am
Hey, I was wondering if I could make an edited version of this with some new sprites and fixing how the sprites are aligned?