Greenlight > Games > Oreganik's Workshop
Greenlight is being retired. For more information on how to submit games to steam, refer to this blog post.
This item has been removed from the community because it violates Steam Community & Content Guidelines. It is only visible to you. If you believe your item has been removed by mistake, please contact Steam Support.
This item is incompatible with Greenlight. Please see the instructions page for reasons why this item might not work within Greenlight.
Current visibility: Hidden
This item will only be visible to you, admins, and anyone marked as a creator.
Current visibility: Friends-only
This item will only be visible in searches to you, your friends, and admins.
Chess Heroes
Description Discussions3 Announcements11 Comments184 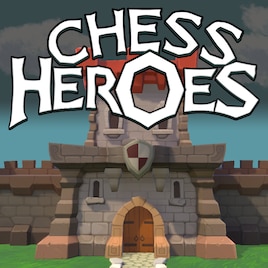 Oreganik
Offline
See all 22 collections (some may be hidden)
Recent Announcements View All (11)
We're Back! New Look + Kickstarter!
August 22, 2016 - Oreganik

Chess Heroes has undergone a radical, beautiful transformation over the past year. We've employed the talents of some fantastic artists and designers to completely overhaul the look and feel of the game. We think you'll agree it's a huge improvement!

We've also tightened up the focus of our game: it's going to be about learning how to play chess. It's still going to feature the awesome puzzle battles of the first version, but with a renewed focus on getting people comfortable with the rules and concepts of chess.

The fun stuff we injected into the traditional model -- special skills and magic spells -- will make a return in the future. But as a small indie shop, we had to focus to ensure we'd meet the level of quality people have a right to demand.

Thank you for your patience over the years. We're tremendously excited that WE ARE ABOUT TO LAUNCH!

Thanks to your support, Chess Heroes has been GREENLIT! This is amazing, because while I've been busy working on Epic Skater, organizing Indie Game Con, developing an education game for the University of Oregon's Center on Teaching and Learning, and joining the board of the ... well, I can't announce that, yet. IT'S BEEN BUSY Y'ALL. And I have not been thinking about Chess Heroes.

I continue to get emails and Facebook messages and phone calls (???) out of the blue, asking when the game will get finished. Friends with kids who played the demo ask on their children's behalf. No matter how busy my life gets, I am constantly reminded that people want to play this game. And more than that, there's a promise inherent in every Greenlight submission:

"If this game is Greenlit, this game will be completed."

I made that promise when I posted this last year, in 2013. And I will uphold that promise. Chess Heroes will get finished and you will be able to play it. However!

It won't just be me at the controls. I'm not going to handle the design, code, art, animation, and sound effects all by my lonesome, not any more. Over the past year, I've helped bring together a vibrant community of game developers in Eugene, Oregon, and come to know a bigger community in Portland. There is SO MUCH TALENT out there, and it would be remiss of me to ignore that.

I've already rewritten a lot of the code, making it more robust and easy to develop. Now it's time to build a time, and bring it on home.

Thank you, everyone. Thank you.

Read More
Description
Release date: Early 2014
Chess Heroes is a modern take on chess that draws a lot of inspiration from video games. There are special moves, magic spells, terrain types, a cinematic story, secrets to unlock, and more!

It's is played as a series of scenarios, where each side has different pieces and board positions. Each piece moves as you would expect, but there the similarities end. You'll have to use new skills to prevent the enemy from breaching your defenses, defeat unique bosses, wipe out the opposing force, and -- just maybe -- pick up a few hats for your king! (which naturally unlock special powers, or did you already guess that?)

If you're curious or want to learn more, you can download the demo at http://chess-heroes.com/demo/ .

Chess Heroes is being made by Ted Brown, a veteran game developer, and the soundtrack is by Corey Jackson, who lives and breathes music.

Thank you for your support on Greenlight!
Popular Discussions View All (3)

The_DuraNerd Dec 25, 2014 @ 6:46am
Wow, so I waited for this game be approved.
Would make a translation in Brazilian Portuguese? I could help if necessary.

EnteredTheDumbgeon Aug 7, 2014 @ 7:44pm
Will there be any other chess variants, or just 1 special way that you made? (cause I love chess variants and want a game I can play lots on). Either way, voted.

Tchatchke Bazaar Jul 31, 2014 @ 9:15pm
vote yes i am a huge fan of chess so when i saw this it not only reminded me of the game but with a sweet and funny child like twist on it adding clothes for the higher up units but also keeping the good old pawns bland yet fun i voted yes you should to