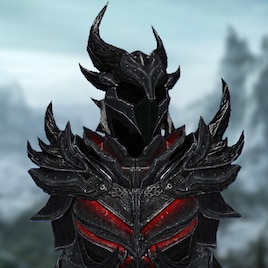 53 items
Description
Daedric Armor is a set of heavy armor available in The Elder Scrolls V: Skyrim. Extremely heavy, it has the highest armor rating in the base game. The armor set contains five pieces: a helmet, boots, gauntlets, a cuirass and greaves, and an optional shield. A weapon set of the same name is also available.

Pieces of Daedric armor can be smithed at a blacksmith's forge or within the basement of the College of Winterhold using Ebony armor, Daedra hearts, black soul gems, and centurion dynamo cores.

True to its predecessors, Daedric Armor design is demonic in appearance with a several spikes protruding from various parts of the body. Sections of the armor glow red in dark areas; this does not, however, affect sneaking.

Me: i'm about to end this man's whole career.

lordheadass Jan 26 @ 2:09pm
thank you for making this pm its very cool

Atridius Apr 10, 2019 @ 5:50pm
donation system in description and new screenshot why not