Store Page
Miscreated >  Workshop > Wymann's Workshop
This item has been removed from the community because it violates Steam Community & Content Guidelines. It is only visible to you. If you believe your item has been removed by mistake, please contact Steam Support.
This item is incompatible with Miscreated. Please see the instructions page for reasons why this item might not work within Miscreated.
Current visibility: Hidden
This item will only be visible to you, admins, and anyone marked as a creator.
Current visibility: Friends-only
This item will only be visible in searches to you, your friends, and admins. 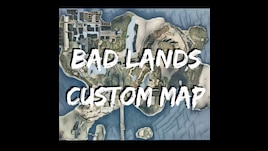 Wymann
Offline
See all 7 collections (some may be hidden)

This item has been added to your Subscriptions. Some games will require you to relaunch them before the item will be downloaded.
Description
UPDATE #3

At first I want to thank you all for all the positive reactions you guys send me since the release.
I also got allot of feedback to work on so let's get straight to it.

Downtown:
I did some major changes on the downtown area. Starting with:
- removed west part of the downtown area (city river)
- expanded the island on the westside
- added more flooded streets (west side)
- added enormous military checkpoint (west side)
- revamped airplane crash site in the streets for easy access from the existing area
- added sewer system connected to new tunnels
- added survival camp in the streets
- Added a new highway on the northern side
- Added underpass system
All this is meant to encourage players to explore this side of the area, as there was no reason to do so before.

Capital city:
Due to reports of game crashes when traveling over the big suspension bridge I've decided to close down this area until we find out why it crashes.

Worldwide changes:
- Added helicopter crash sites.
These crash sites are spread out over the whole map. If you find one go and check for loot! They got some "epic" spawns on them! Every update i will change the locations of these crash sites

Join our Discord for updates and more! https://discord.gg/3dtWGJg
< >
30 Comments

Injected_Nitro Nov 23, 2019 @ 2:08pm
Hi Wymann. I have this server up and running for anyone who joins. Bad Lands Custom Map|Modded|Check MOTD|PVE. Thank you for the Great work.

Wymann  [author] Jun 10, 2019 @ 2:52am
@texaschainsaw01 yeah i know, in the latest patch we blocked the bridge so technicly you can not enter the capital city anymore until i find the problem

texaschainsaw01 Jun 9, 2019 @ 3:34pm
Nice Map Shame it currently crashes when crossing bridge to Capital City and relauching doesnt fix I had to delete the Database to reset player positions

WolfVie Jun 4, 2019 @ 6:24am
Quick Question, will this require a reset or will the games already in progress work with the map update?

Primorec30slo Jun 4, 2019 @ 2:06am
I like your map very much. I played it for quite some time and when I came to Capital City, the game was crashing. I re-start and re-crash. I do not understand why it does? Can you help me?