Store Page
ATLAS >  Workshop > The Rare Aquatic Pyro's Workshop
This item has been removed from the community because it violates Steam Community & Content Guidelines. It is only visible to you. If you believe your item has been removed by mistake, please contact Steam Support.
This item is incompatible with ATLAS. Please see the instructions page for reasons why this item might not work within ATLAS.
Current visibility: Hidden
This item will only be visible to you, admins, and anyone marked as a creator.
Current visibility: Friends-only
This item will only be visible in searches to you, your friends, and admins. 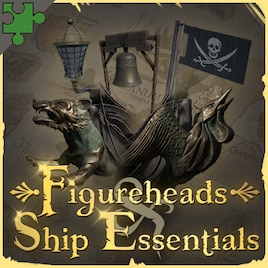 This item has been added to your Subscriptions. Some games will require you to relaunch them before the item will be downloaded.
In 1 collection by The Rare Aquatic Pyro
East Vinindia Co. Blackwood RP

Mod is 100% clean and stackable, except with different versions of the mod!
Keep to only one of the mod versions on your server/game!
Prefer a lighter version of the mod with different features? Try this version instead!
Figureheads and Ship Essentials - ZZGaming Edition

Interested in custom figureheads? How about a bell to get the attention of others, lanterns for your ship, or a jolly roger? This mod adds additional figureheads with multiple appearance options as well as various ship structures for yer adventures on the high seas! Learn the skill from the Seamanship skill tree after Basics of Sailing, to get all the engrams needed.

Figurehead models are all custom made within Zbrush and textured in Substance Painter unless otherwise stated.
Base Bowsprit models are from the game.
Skeleton models are posed meshes from ATLAS and retextured.

Windowed Cabin Planks are Here! Deck out your ships with new Plank and deck pieces, exclusive to the new ship variations. Windowed ships can either be purchased in full from a hired shipwright, or be built from FSE shipyards! (These will be added to drop tables at a later date.)
The Shipwright Shopfront can now have a hired NPC. Shipwright Ol' Bailey can be hired as long as there is gold in the structure's inventory, and hiring him allows you to buy various items. His base salary is approximately 1 gold every 3 days, but some of his merchandise may not come cheap!
Are ye brave enough to face a pirate's curse? NEW with this haunting season is a spooky figurehead, with a haunted variation which puts your ship and crew under the Harbinger's curse. Ye'll be grim, hungry and spooky, but you'll be almost immortal, with a skeletal grin.
Who are ye gonna call?

I now have a Patreon page! Donations aren't required, but are greatly appreciated!
https://www.patreon.com/therareaquaticpyro
Or if Patreon isn't your thing:
https://paypal.me/TheRareAquaticPyro?locale.x=en_GB

Check out my other work on ArtStation!
https://www.artstation.com/therareaquaticpyro

The trailer was recorded on non-dedicated mode, with Eco's RP Decor and Peachy Ship Decor mods used for cabin decorations.

Miscellaneous:
Buyable with coins from Shipwright

- Ectoplasmic Ichor (An ethereal, otherworldly substance used for making cursed objects)
- Skeleton Cure-All (Purified Ichor, for use if a server restart or other issue causes curse effects to remain after being lifted. Acts like a suicide pill.)

XLSpeedSailMoveWeightMult=1.0
Multiplier for the maximum weight for movement for the XL sail.

XLSpeedSailAddVelocityMult=3.4
Multiplier for the additional max velocity for the XL sail.

XLSpeedSailThrottleForceMult=1.0
Multiplier for the throttle force of the XL sail.

XLSpeedSailMaxWindAngleMult=90.0
Multiplier for the maximum angle to capture wind for the XL sail.

XLSpeedSailRotSpeedMult=30.0
Multiplier for the rotation speed of the XL sail.

XLSpeedSailMinWindForceMult=0.33
Multiplier for the minimum steering wind force for the XL sail.

Further Out:
- Keep a weathered eye on the horizon...
Popular Discussions View All (15)

The OP buff granted on the ghostly ship
Thor

Alex_Janeway Jan 5 @ 2:59am
Would it be possible to configure it to spawn other things? like other modded items?

jrc Nov 28, 2021 @ 10:55am
Too bad they don't resize properly for the sloops and Schooners. Also, I've never seen the hybrid sails actually show up in game. Hopefully, when Altas updates the mod stuff, that'll change.

[NOCS]Legion Jun 8, 2021 @ 4:30am
If I bought atlas it is only thanks to your mod, the ships of the game without windows and with few customization options did not convince me, but when I saw this mod, my doubts that held me back disappeared and here I am. In every my game yours mod is present. Thank you very much, i highly recommended this mod to everyone

Lalienfou Apr 23, 2021 @ 9:03am
Hello, I came back to the game after a pause, I like this mode but I can't hire Ol'baley. I tried with gold in my inventory and shop inventory but I have no option to hire the guy


What is the reason that you can not put gold in the shipyard?