Store Page
Tabletop Simulator>  Workshop > KaptenKelz's Workshop
This item has been removed from the community because it violates Steam Community & Content Guidelines. It is only visible to you. If you believe your item has been removed by mistake, please contact Steam Support.
This item is incompatible with Tabletop Simulator. Please see the instructions page for reasons why this item might not work within Tabletop Simulator.
Current visibility: Hidden
This item will only be visible to you, admins, and anyone marked as a creator.
Current visibility: Friends-only
This item will only be visible in searches to you, your friends, and admins. 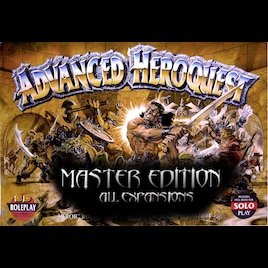 JJ.Sch
Offline
See all 40 collections (some may be hidden)

ITS HERE!!!! FINALLY!!!!! In its all of its original glory! Relive the days of old or start a Life anew it's up to you in advanced heroquest choose from one of the 8 playable pre-made heroes or make your own with blank character sheets provided. Also includes multistate rule book and also a searchable rulebook on the tablet for ease-of-use. If you like what you see hit that like button we will be more inclined to add more content if we see a lot of people want more content.

The expansion terror in the dark is in the works hope to release in the next two weeks.

Most assets used from the great people at http://www.yeoldeinn.com such a great community thank you to everyone that has contributed to their archive.

Big thanks to Valnar Nightrunner from the inn for his tilesets.
More coming

Music box is under table


Thank to all of you and your kind words with out you we could never find the motivation to do what we do. We wish you many good games and days,

UPDATE: ALL White Dwarf quest Books and rule update books and new mage spell books have been added ( Thanks for the tip RikJenMattic ) as well as tiles. new mini figures for new quest books in the works

UPDATE: Terror in the Dark is now added!! parts found next to rule book have fun!

KaptenKelz  [author] Dec 29, 2021 @ 3:11pm
It is a shader for the music box under the table. No worry nothing is missing, and does not affect gameplay.

phil11689 Dec 29, 2021 @ 12:54pm
every time i lode the mod i get this message.
Shader didn't load correctly for AssetBundle material base. Assigning Standard shade.
i dont know what its referring to?

Coffeehound RetroSharka Mar 23, 2020 @ 4:43am
Thank you for continuing to work on this mod and adding Terror in the Dark, it's very much appreciated <3