Store Page
Cities: Skylines>  Workshop > Keallu's Workshop
This item has been removed from the community because it violates Steam Community & Content Guidelines. It is only visible to you. If you believe your item has been removed by mistake, please contact Steam Support.
This item is incompatible with Cities: Skylines. Please see the instructions page for reasons why this item might not work within Cities: Skylines.
Current visibility: Hidden
This item will only be visible to you, admins, and anyone marked as a creator.
Current visibility: Friends-only
This item will only be visible in searches to you, your friends, and admins. 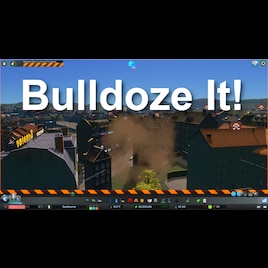 This item has been added to your Subscriptions. Some games will require you to relaunch them before the item will be downloaded.
In 1 collection by Keallu
C:S mods that I use

It is also possible to execute bulldozing only once using key mappings.

Even further both specific counters and accumulated statistics about how many buildings are automatically bulldozed can be shown in the info panel.

Notice that only residential, industrial, commercial and offices are bulldozed. Other buildings, that can normally be rebuilt, will not be bulldozed.

Thank you to the amazing modding community and especially SamsamTS, TPB, boformer and BloodyPenguin for releasing the source code of their great mods so we can all be inspired.

Instructions
Subscribe to the mod and choose in-game whether abandoned, burned down, collapsed or flooded buildings should be automatically bulldozed.

In options, it is possible to decide in which interval the automatic bulldozing should occur and how many buildings per interval. It is further possible to preserve historical buildings and also to ignore search for survivors by a disaster response unit before bulldozing.

If you want one-time execution of bulldozing, use the following key mapping(s) when clicking buttons:

Use LEFT SHIFT for one-time execution of bulldozing in the next cycle with maximum buildings limitation.

Use LEFT SHIFT + LEFT CTRL for one-time execution of bulldozing in the next cycle without maximum buildings limitation.

You will notice a little clock on the button while waiting for the next cycle.

Compatibility
This mod does not use any detour, patching, replacing or decorating technique and it does not alter game save files in any way and can be disabled or unsubscribed safely at any time.

Thank you for:
Popular Discussions View All (1)

BougePasJteTue Aug 10 @ 5:12am
At first I thought it was not working but then I found those icons in the Bulldoze tool from which I could toggle on/off the items I wanted to bulldoze. The automatic bulldoze seems overwelmed at 1st so a couple of forced bulldoze without limit ( hold left-ctrl+left-shift then click on the toggle ) had it going and after that it was clearing debris automatically. Good job on this

ronlive818 Jun 26 @ 2:52pm
It doesn't work at anymore. Stays at 0 and never bulldozes anything. Turning mod off and back on will make it work for a few minutes and then goes back to 0

Outcast Apr 10 @ 9:21am
It would be nice if these kind of mods also de-zoned the area the building that got demoed was on, so that it didn't just build back up right off to be abandoned again.
I find it becomes stupidly easy to flatline in your demands, the RCI, due to any 'issues' that form from you over doing one of the demand types that the game never gets to balance out so your demand starts returning, instead it balances out at a flat line as abandoned goes poof and just barely enough demand pops up for a new building to replace it than that demand is back to zero.
That's why bulldozing these things is normally a manual thing.

KaneTheBoom Mar 31 @ 10:10pm
This is functioning. Make sure you go to the mod settings at set the max buildings per interval to a high number like 99999999 then it works.

hampter Mar 25 @ 3:36am
don't know why and how, but this caused a simulation error in my save. had to roll back to an earlier save to fix
< >