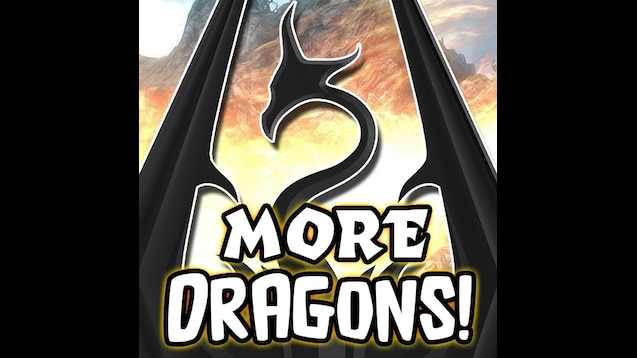 This item has been added to your Subscriptions. Some games will require you to relaunch them before the item will be downloaded.
In 1 collection by Domcoppinger
Skyrim +

This mod increases the number of random encounters involving dragons. Not by a huge amount that would ruin the balance of the game, but by enough that you will get to enjoy the excitement of a dragon fight on a slightly more regular basis. So if you like the dragon fights just hit the "Subscribe" button at the top!

Also, one benefit of the simplicity of this mod is that it is incredibly unlikely to conflict with any other mod, so you can happily use mods such as "Deadly Dragons" or "Diversified Dragons" alongside this one. It also means that this is a tiny mod, at around 270 bytes steam just doesn't show it having any size. This mod does NOT change anything about the dragons, just reduces the time between random encounters.

Even More Dragons (Makes you encounter dragons about twice as often as this mod): http://steamcommunity.com/sharedfiles/filedetails/?id=84034543

Thanks to:
Five_Not_Alive - Your bugtesting/help was invaluable!
Misak-b3 - Thanks for pointing out the obvious and saving me hours of answering questions!
Andrewjamestaylor - For nagging me/suggesting that I release two more "radical" versions!
breakinglindemann - For correcting my terrible Russian translations!

Stotin Apr 17, 2020 @ 9:13am
Did mirak take them? He might have bugged the game and is now taking all your souls. If it shows the animation but doesent go towards you are doesent give you them it might be him.

RavenMad13 Mar 5, 2020 @ 1:39pm
Killed about 4 dragons in less than 10 minutes, but can't harvest any dragon souls. Maybe this or another dragon mod are making it hard for me to absorb them?

Stotin Dec 14, 2019 @ 1:05pm
Hey sometimes in the data when you load skyrim you have to un-select that you have mods enabled. Not sure if it will work but worth a shot.

Pablo Mandelo Dec 3, 2019 @ 5:34pm
I have unistall this mod, but continue appears a lot of dragons. I really want to back a normal dragons spwan

Squidy720 Jan 10, 2019 @ 3:24pm
i deleted this and the even more dragons and the most dragons mod and still theres dragons all overe the map

Timesplitter Nov 23, 2018 @ 11:08pm
TESV: Skyrim: God Amongst All Edition 11/23/2018 has just been released. Thank you for your amazing mod that contributed greatly to making this mod collection what it is today. Newly included in this collection are the Unofficial Skyrim Patches making this game run as stable and smooth as Skyrim Special Edition. Thank you again for your amazing addition to the collection. Check it out at https://steamcommunity.com/sharedfiles/filedetails/comments/106745968 . Your one arrow to the knee that's left, Timesplitter.