Store Page
Tabletop Simulator>  Workshop > Lordnine's Workshop
This item has been removed from the community because it violates Steam Community & Content Guidelines. It is only visible to you. If you believe your item has been removed by mistake, please contact Steam Support.
This item is incompatible with Tabletop Simulator. Please see the instructions page for reasons why this item might not work within Tabletop Simulator.
Current visibility: Hidden
This item will only be visible to you, admins, and anyone marked as a creator.
Current visibility: Friends-only
This item will only be visible in searches to you, your friends, and admins. 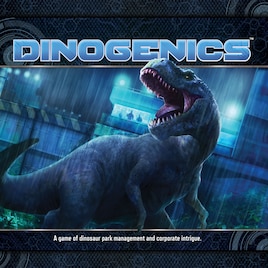 kensuaga(CodedCardboard)
Online
See all 88 collections (some may be hidden)

This item has been added to your Subscriptions. Some games will require you to relaunch them before the item will be downloaded.
Description
DinoGenics is a competitive game for two to five players, in which each player attempts to build and run their own successful dinosaur park.

Each player is the head of their own corporation with access to their own private island resort. Each season, players assign agents to the mainland to compete over DNA and other limited resources. Once collected, players can build fences, various park facilities and populate their parks with dinosaurs. Parks with the most prestigious dinosaurs will attract the most visitors. But beware; if dinosaurs are neglected or improperly penned, they will attempt to escape and spread havoc through the entire park.

Use all the tools at your disposal; DNA splice mutant dinosaurs, exploit the Black Market or just try to run an honest park, the choices are yours.

Do you have what it takes to lead your corporation to victory?

-=-=-=-
An expansion and a full reprint of DinoGenics will be available July 9th 2019. Keep an eye on our website for more information!

SIRBEEFMAN Oct 14, 2020 @ 4:48pm
played 3 player the other day and when we went to the final round no visitors spawned on the track, but bonus visitors spawned in the bonus spot. dont think bonus visitors are supposed to show up in final round. also the dinosaur value track token updates with proper number but must be moved manually to reflect value on player board. great game just needs a few tweaks for TTS

pogle Sep 3, 2020 @ 3:33pm
Lordnine commented on that early in August: "I would love to bring Controlled Chaos to TTS but our mod maker has been incredibly busy lately. Waiting to hear back from him on when he will be able to take it on."

Dinobro007 Aug 25, 2020 @ 7:48am
Do you have any intentions of adding the new Controlled Chaos expansion? I've been playing the physical game and its adds a lot of fun to the game, but I'd like to play it with my friends who don't live near me

Lordnine  [author] Aug 20, 2020 @ 8:09am
Due to the number of variables in final scoring it is unlikely that it will ever be fully automated. If you would like to take a stab at it yourself, you can save a copy of the mod locally and then edit the scripting in your own local copy of the file.

GiefCat Aug 19, 2020 @ 10:47pm
I bought this board game last week and had a blast playing it over the weekend. When I saw it was on TTS, I didn't expect the mod to be made by the actual creators of the game! Congratz again on making such a fun game :)

Quick question, are there any plans to automate the End of Game scoring in some ways or will it be manual? Are we able to modify the scripts to allow this at all?

Lordnine  [author] Aug 6, 2020 @ 6:41pm
Hi, I can't seem to replicate the problem with Park Mascots or Petting Zoo. Can you tell me the number of players you have in the game when the problem happens?

I would love to bring Controlled Chaos to TTS but our mod maker has been incredibly busy lately. Waiting to hear back from him on when he will be able to take it on.

As for an official French version of the mod, I appreciate your enthusiasm but that would be a sizeable undertaking all on its own. Currently it is a little beyond what we can provide personally.
< >