Store Page
Garry's Mod>  Workshop > CJ's Workshop
This item has been removed from the community because it violates Steam Community & Content Guidelines. It is only visible to you. If you believe your item has been removed by mistake, please contact Steam Support.
This item is incompatible with Garry's Mod. Please see the instructions page for reasons why this item might not work within Garry's Mod.
Current visibility: Hidden
This item will only be visible to you, admins, and anyone marked as a creator.
Current visibility: Friends-only
This item will only be visible in searches to you, your friends, and admins. 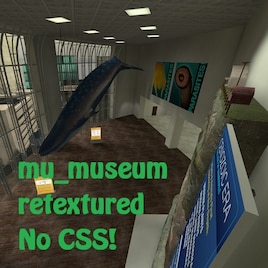 CJ
Online
See all 1257 collections (some may be hidden)

This item has been added to your Subscriptions. Some games will require you to relaunch them before the item will be downloaded.
Description
mu_museum is from the game "Counter-Strike", normally you would need CSS for this map, however, I removed all the CSS textures and replaced them with gmod textures, so you don't need any 3rd party textures in order to play this map. Credit to "GameBanana"[gamebanana.com], for giving a template to follow. There is someone named "Benigane" who uploaded the map first to Garry's Mod (containing CSS textures) So I want to give them a shoutout just in case if you wanted the version with CSS.

Please comment any bugs you find throughout the map (such as getting out the map, missing textures, and etc...), and I'll try my best to fix them!
^^^ I'm aware there are some lighting glitches, I'll try to fix them later, but im stumped right now. ^^^
NOTE - You have to give it a second before going on the map after subbing to it or else there will be errors!

I edited this map for a server me and my friends own called "Misty Meadows". We are currently only a murder server, however, we are looking into possibly opening up more servers with different gamemodes in the future!

PyRoMaNiAc717 Apr 1 @ 8:08am
There don't appear to be any clues on the map when playing Murder

Darkharp182 Jun 16, 2019 @ 5:43pm
I really appreciate this! While I own CSS, a lot of my friends who enjoy game modes like Murder and Hide N' Seek don't own the game so everything is missing textures for them, so it's nice to see that somebody could take a well known map and turn it into something everyone can access without buying a whole other game.