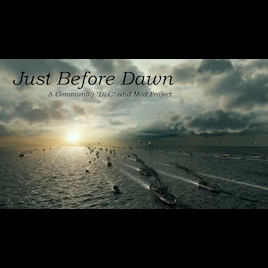 Chief Berto
Offline
See all 7 collections (some may be hidden)

This item has been added to your Subscriptions. Some games will require you to relaunch them before the item will be downloaded.
Description
+++++++OPEN BETA+++++++

The Project is now fully updated with First Blood. Our 1. SS Panzer has been changed to the 9. SS Panzer to make room for the Devs' take on the fearsome LSSAH. Utilizing much of our work from the 1. SS the 9. SS has seen changes to make it fit into our vision of how that unit should be.


Just Before Dawn "Community DLC" and Mod is a project to expand and enhance Steel Division: Normandy 44. The primary goal of Just Before Dawn is to offer new divisions and more options for players within the asymmetrically balanced gameplay of Steel Division. We intend to mirror the compromise between fun competitive gameplay and historical accuracy that makes Steel Division a cult classic. With input from some of the pillars of the SD44 community, and the support of the Steel Division League, we strive to bring players more of the game they love.

While Steel Division offers commanders a vast array of deck to build, there are many divisions that fought in Normandy that aren’t represented. Most of these divisions are very similar to divisions already in the game, and might be overlooked as the Devs create new content and take greater steps to progress Steel Division. Just Before Dawn will fill these in, using the assets provided to create subtly unique decks to provide players with more choice, and enrich the flavor of gameplay.

Just Before Dawn will slowly release new divisions into the game. We will attempt to release the new divisions in pairs of 1 Allied and 1 Axis, for as many divisions as we can. This will be done through income, availability, veterancy, roster construction, and new units. Our addition content aims to be balanced with the vanilla roster of decks, and while it has been thoroughly researched, we take liberties for our divisions to parallel and exist within the original game.

Lastly some of the new divisions use assets from the Steel Division DLC’s which mean that for players without that DLC, some of our decks will appear incomplete. These will be clearly marked. Please dont' ask for us to change or bypass this, we seek to enhance SD44 and that wouldn’t be possible without the hard work of the developers. Players without DLC will still have access to some of the new divisions and they will be able to play against all of them just as if they were DLC content.

A special thanks to MrCrisps, the creator of the definitive SD:44 realism mod, Storm in the West '44. The pioneer, founder and teacher of the Steel Division modding community, it is through MrCrisps’ exploration and work that any of this is understood or possible.
Popular Discussions View All (3)

Which Divisions would be cool in the future?
Protosszocker

A Look at the Added Divisions:
Chief Berto
< >
94 Comments

Protosszocker Dec 11, 2018 @ 4:14am
Well chief still hasn't returned so yeah as long as he doesn't return it is"DEAD". He hasn't been online for over a month by now.

Protosszocker Dec 1, 2018 @ 12:13pm
well he was working on it till 1 month ago, but atm he is MIA as he has some off road stuff to do where he doesnt have internet access so yeah if you dont know whats going on, stop insulting the modder and other community members. rather take your kids outside and ahve a good time.