Store Page
Batman™: Arkham Knight > Guides > sn0wsh00's Guides
This item has been removed from the community because it violates Steam Community & Content Guidelines. It is only visible to you. If you believe your item has been removed by mistake, please contact Steam Support.
This item is incompatible with Batman™: Arkham Knight. Please see the instructions page for reasons why this item might not work within Batman™: Arkham Knight.
Current visibility: Hidden
This item will only be visible to you, admins, and anyone marked as a creator.
Current visibility: Friends-only
This item will only be visible in searches to you, your friends, and admins.

How to Swap Characters and Meshes
By sn0wsh00
Ever wanted to play as someone else other than the Dark Knight in Batman: Arkham Knight? Well you can with mesh/character swapping mods. After reading this guide, you should be zipping through the Gotham skyline as Harley Quinn in no time!

A Note on Terminology

Comments
A Note on Terminology
There are several phrases you'll see when talking about modding Batman: Arkham Knight. The term "character swap" refers to running code to replace Batman and all his moves and animations with that of another playable character. In other words, in a character swap, you can have Harley Quinn instead of Batman clear out the mixing chamber inside Ace Chemicals with her bat and mayhem mode. Note that the character swap also carries over Harley's animation and idle lines.

The term "mesh swap" refers to running a code to swap a mesh (aka skin aka model) of the current player character with that of another mesh. In a mesh swap, you will still have the same animations and skill sets as the original character, but you will now be playing with a different, possibly non-Batman skin. An example is of a mesh swap could be swapping out Batman's skin with Johnny Charisma's skin. Your character will look like Charisma, but you will still be able to glide like Batman and use all of Batman's gadgets and special takedowns. As you'll see later in this guide, it's possible to do both character swapping and mesh swapping at the same time.

Finally, you might see some mods that claim that "no mesh-swapping" is required. This refers to mesh mods where you can choose those meshes from the showcase menu, as opposed to running console commands. These mods are created with hex editing and can only work with other playable character models.
Setting Everything Up
Before we even start, I recommend that you have the Season Pass so you can have access to all the characters.

To swap meshes or characters, you will need to run console commands. However, unlike a game such as Half-Life, you don't input codes inside a console window in Arkham Knight. Instead, console commands are run from external text files. To do this,

You can update console.txt while BAK is running. Just save console.txt after you are done editing and you will be able to run whatever new code you placed inside the text file. On the other hand, if you want to update keybindings in BmInput.ini, you will need to restart the game.
Character Swapping 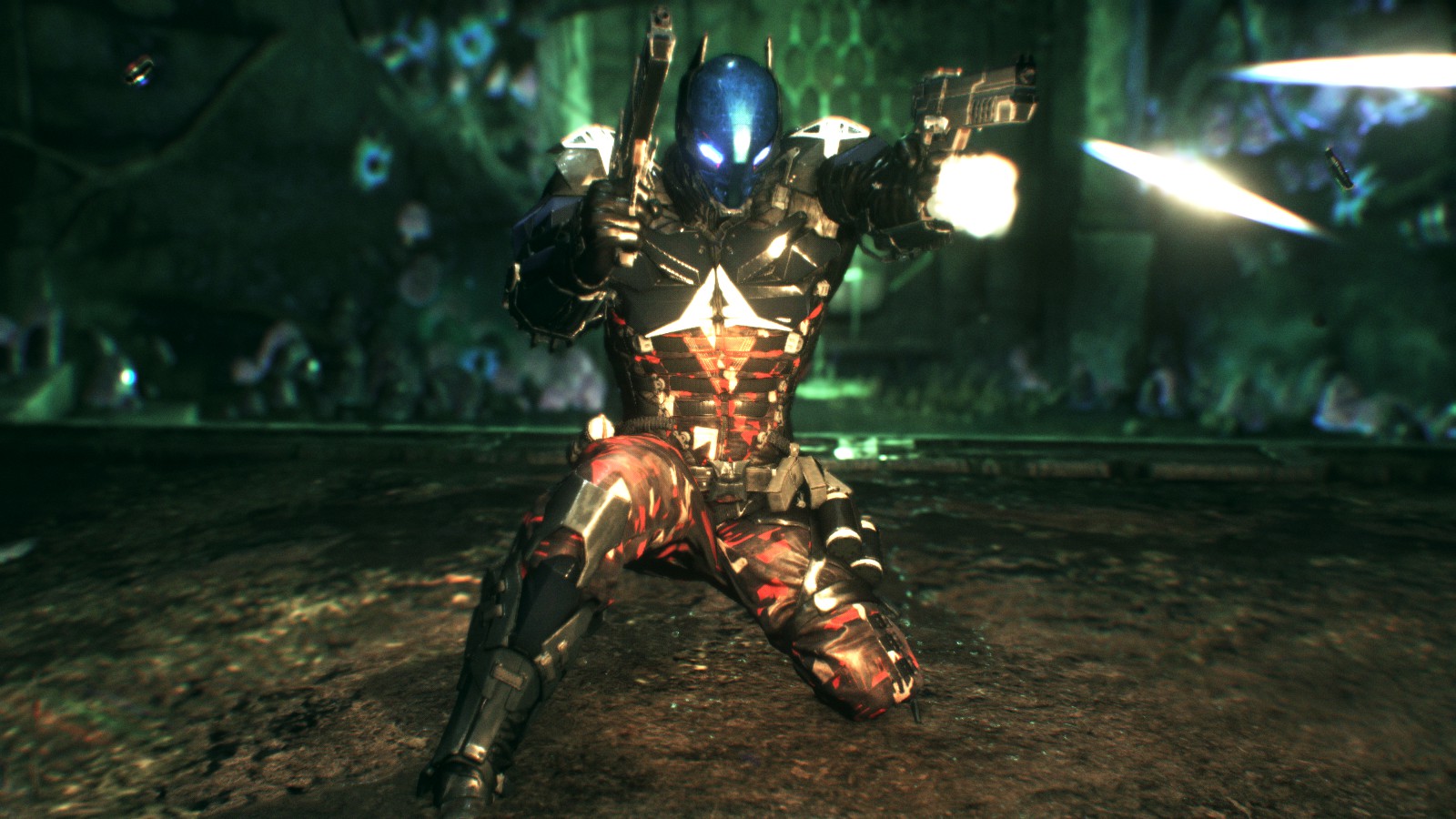 Now that you have your BmInput.ini and console.txt files set up, it's time to insert the codes. There are 11 playable characters in B:AK. Their codes are as follows:

It shouldn't be too hard to discern which code corresponds to which character. Bruce Wayne and Gordon both have Batman's fighting moves, but lack any gadgets or ability to perform a beatdown. Joker has absolutely not fighting skills. Instead, the only thing Joker can do is slide underneath everyone. Also, you will need the corresponding DLC for each character to be able to play as them.

So, let's say we want to play as Harley Quinn in the main campaign. To do this,

As you just performed a character swap, you'll notice that not only will you look like Harley, but you'll also have her animations, her gadgets and her voice lines. You can even activate her Mayhem mode and use it against someone else other than the Bludhaven Police.

To play as another character, simply replace the line "LoadPC Playable_DLCHarleyQuinn" inside console.txt with another character swap code, say Red Hood (LoadPC Playable_DLCRedHood). After saving console.txt, restarting the game and spamming the console key during the loading screen, you should now be able to go around Gotham shooting thugs and criminals. As you might surmise, you should only use one character swap code at a time.

Don't expect to complete the main campaign or any of the story packs as a swapped character, though. Your character will usually revert back to Batman during a cutscene if you are only running a character swap mod (though some cutscenes will still show your swapped character). More seriously, you sometimes won't be able to continue the game if you're not playing as Batman.
Mesh Swapping, Basic 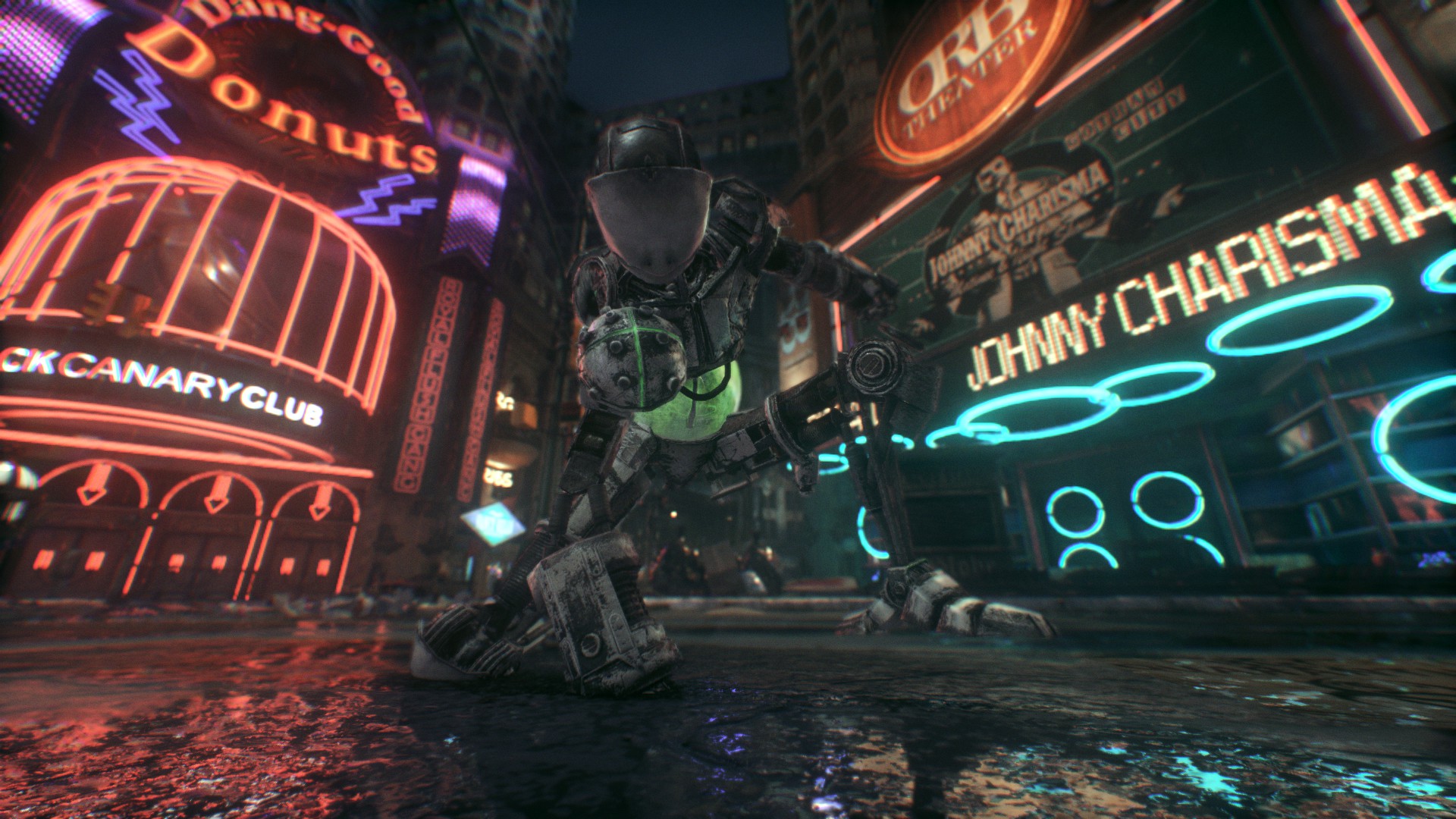 To perform a mesh swap, we first need to find the mesh codes. Mesh codes can be easily found via Google, but there are several resources I found:

In general, if you want to swap meshes,

You can view a video on how to mesh swap below: 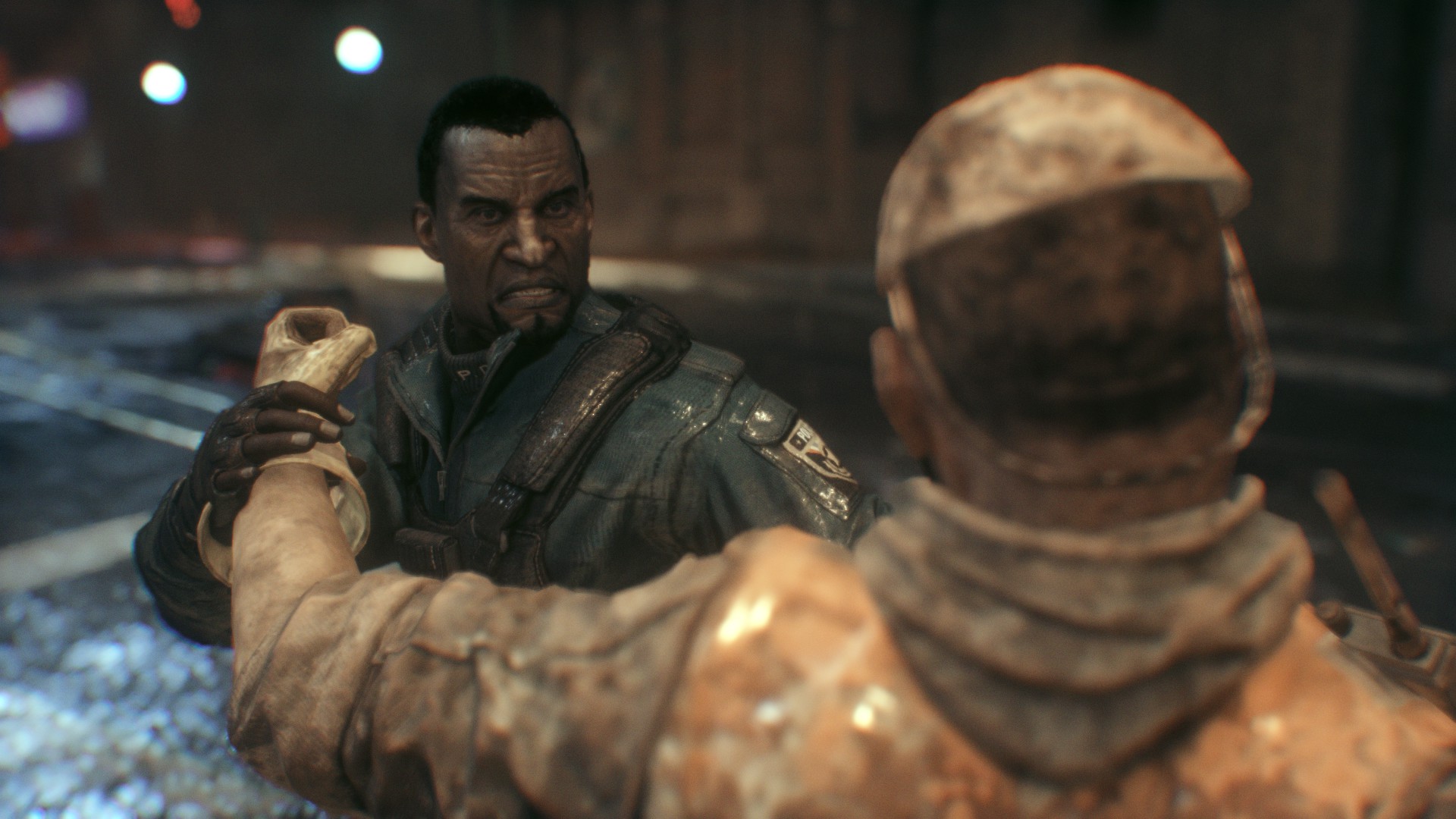 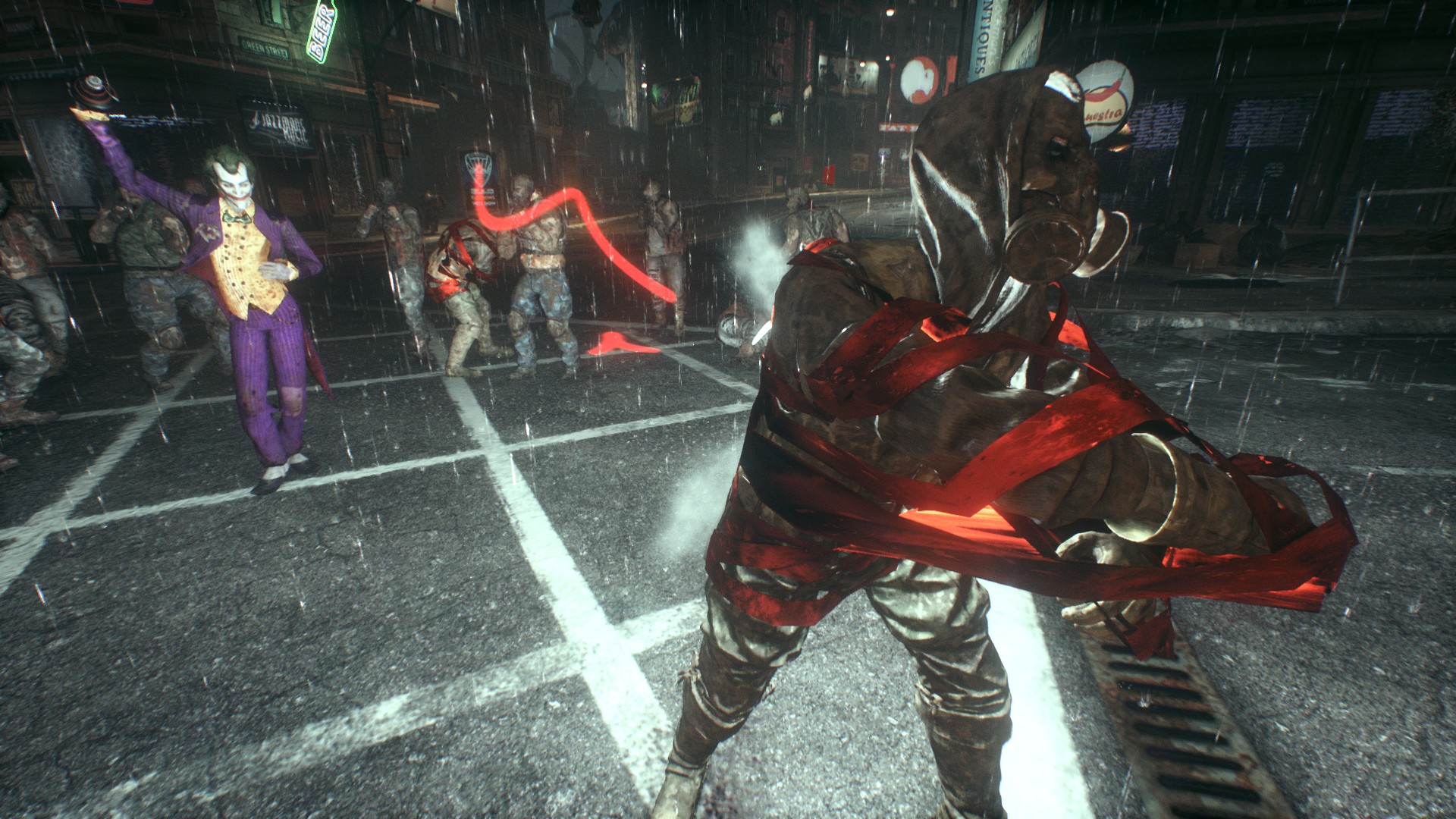 Load the Joker model in the Showcase and press the console.txt button. After pressing the console.txt button, start a new game, doing the usual key spamming. Note that in the previous example that we did not need to load any Harley models in the showcase. Once the game loads, you should be playing as Mr. J, but with Harley's animations, gadgets and voice lines. 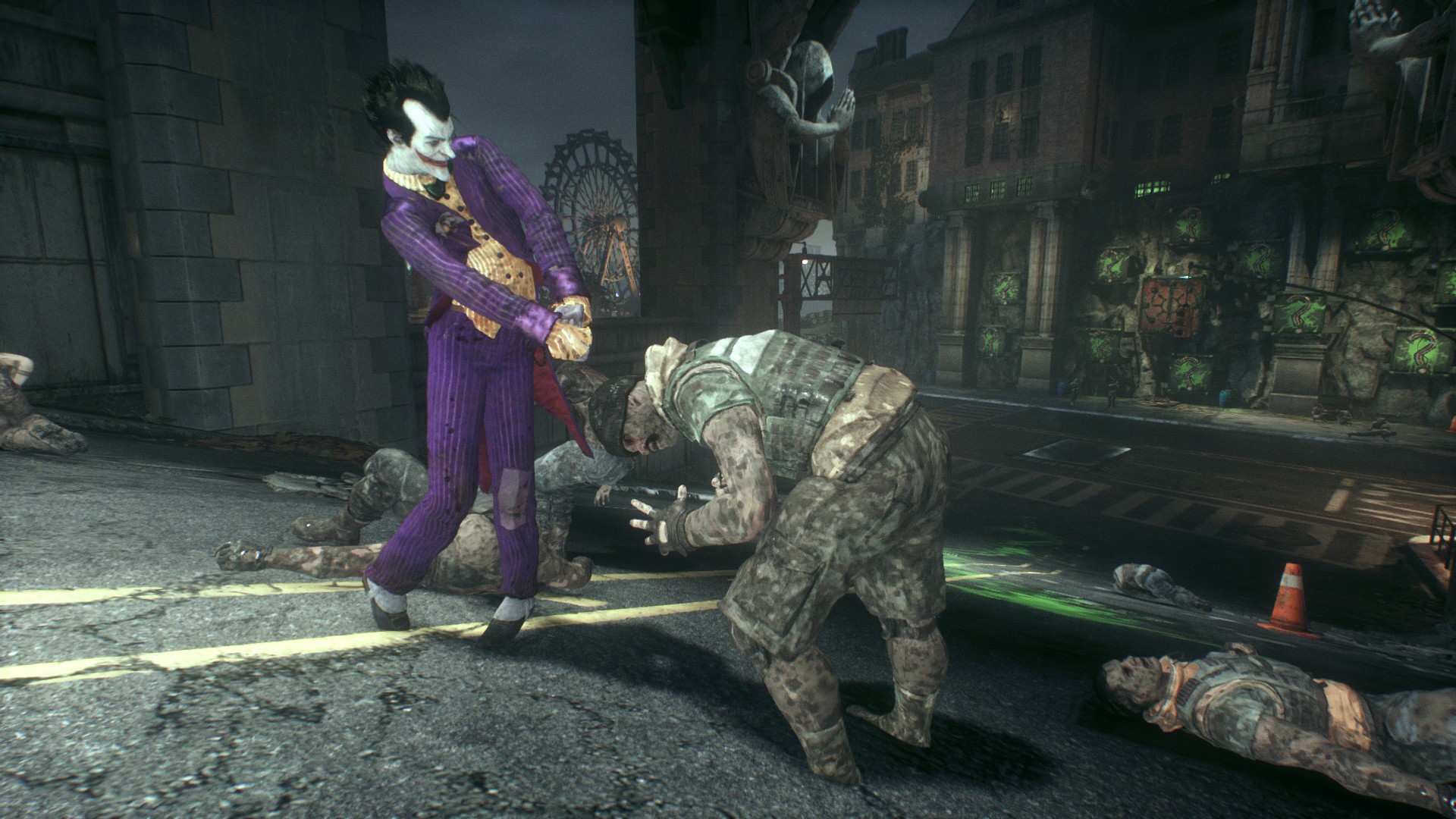 If the mesh code you place below the LoadPC line matches with the skin you selected in the showcase for that character, you won't even need to load up the showcase, as LoadPC does the mesh loading for you. So why would you do this, other than to save a couple of seconds? I mean, you won't look any different than if you had just loaded only a character swap.


Notice that while I can use Harley's moves while fighting the rebels, the player model switches back to Batman during the cutscene. Now compare to this video where I fight the rebels as Catwoman and combine both mesh and character swapping:

I found this method to work for most cutscenes, at least for cutscenes that will still work if you don't play as Batman. One cutscene that did not work with this method, though, was the scene where Gordon punches Batman. You can still continue to play as Barbara Gordon after the cutscene, but the only way to get Batgirl to appearing during the actual cutscene itself is to use this Batgirl skin over Batman[drive.google.com] mod and select the Batgirl skin in Batman's showcase menu.
Mesh Swapping, Advance
Mesh Components
Let's take a closer look at those mesh variables in those codes I posted earlier.

The first variable is MainMesh. MainMesh is usually the head and hands components of a model. For certain models, such as Nightwing, MainMesh can consist of the entire body. As such, this is arguably the most important mesh.

The next variable is BodyMesh. This is usually consists of the clothing and suit. If MainMesh already loads the entire model (see Nightwing), then you can set this variable to "None."

The third variable is CapeMesh. This variable obviously refers to the cape that Batman wears. If you don't set CapeMesh to "None," your swapped character will end up wearing Batman's cape.

Finally, we have the variable ExtraMeshes. As its name implies, this variable loads any additional meshes that wasn't already loaded by MainMesh or BodyMesh. In other words, ExtraMeshes is used when you want to load more than two non-cape meshes. You can probably load as many meshes via ExtraMeshes as you want.

Unfortunately, ExtraMeshes only works for specific characters, none of them Batman. Only Azrael, Red Hood, Gordon and Hush are able to load extra meshes via the ExtraMeshes variable. 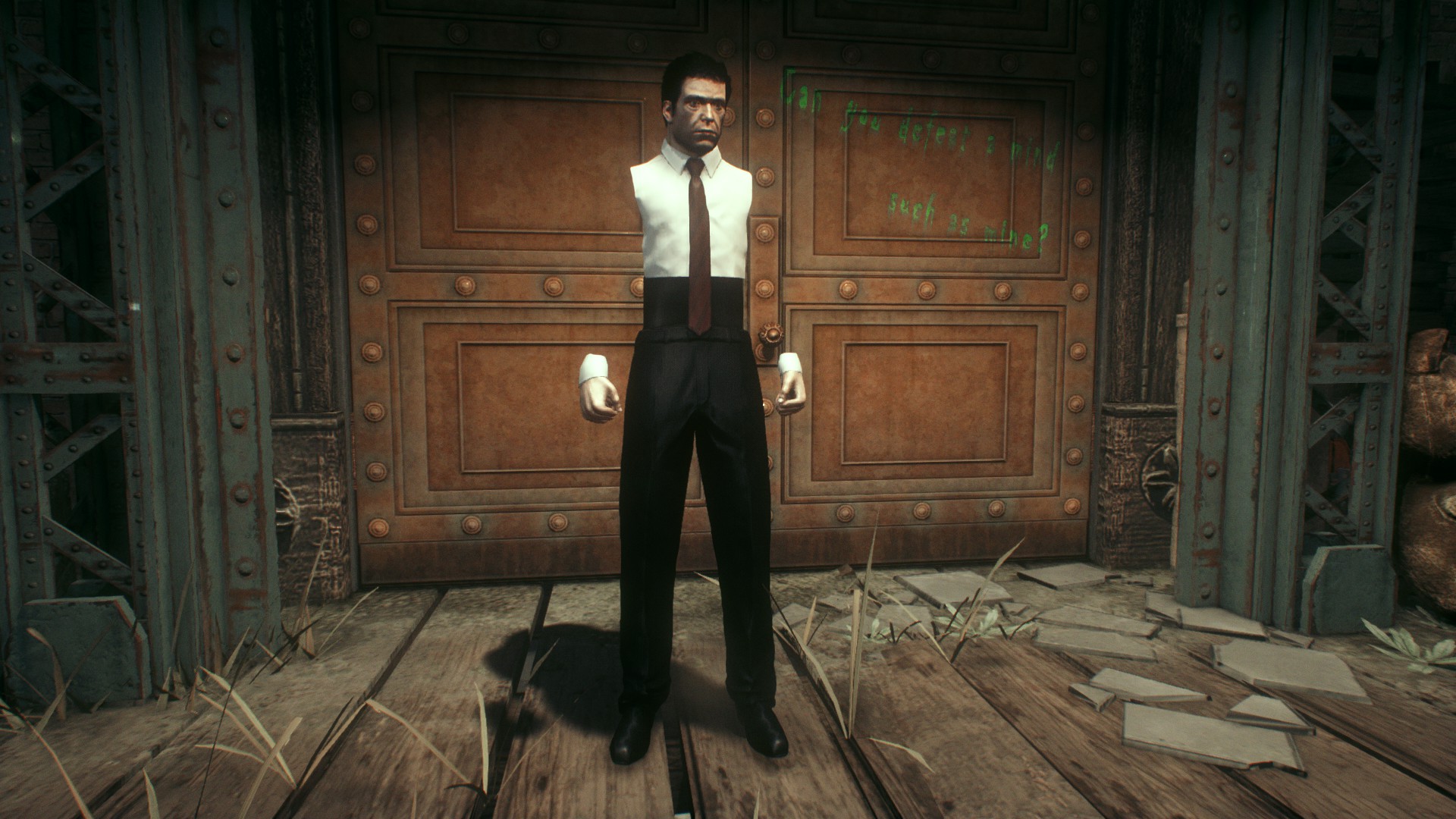 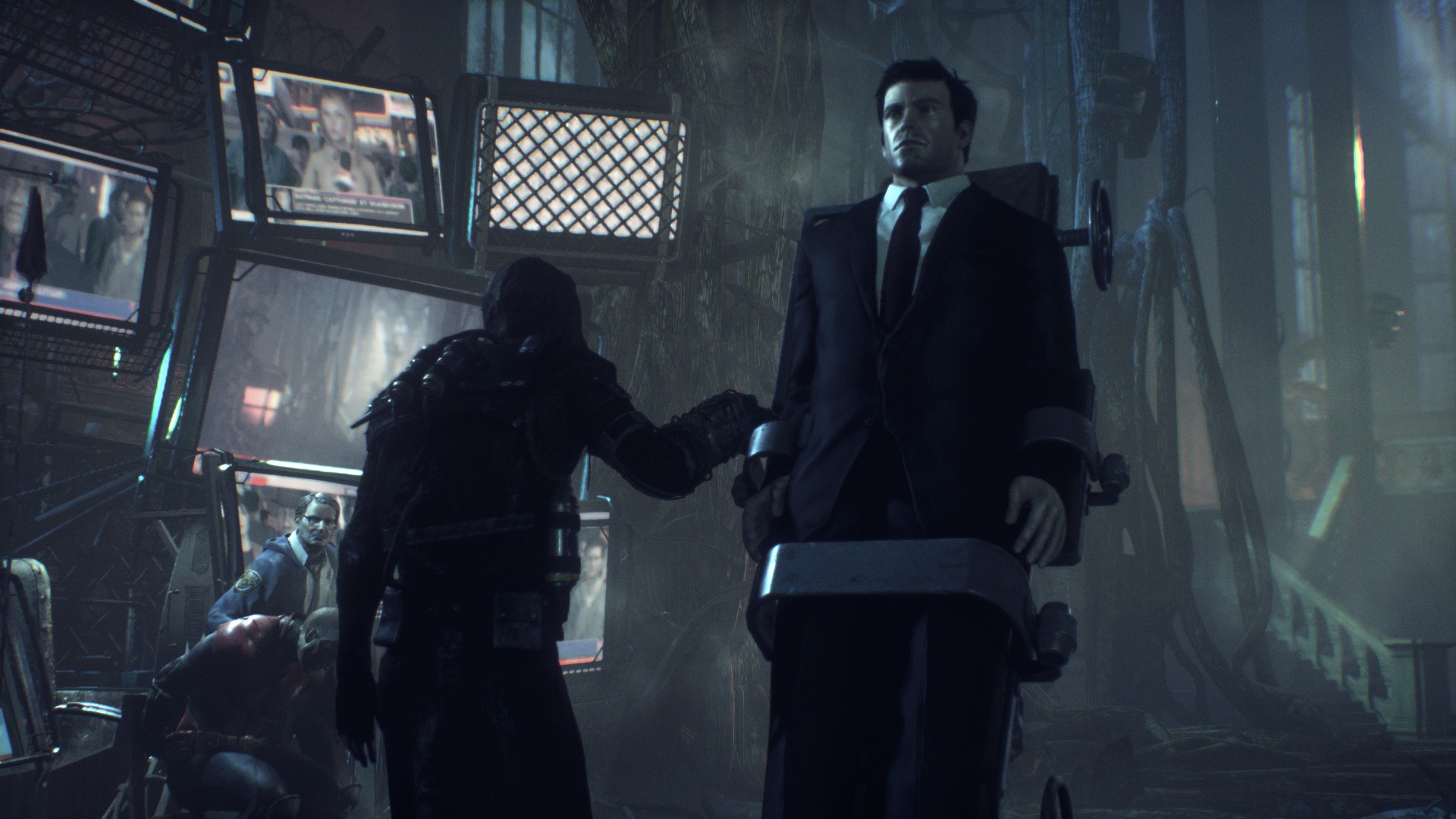 I haven't really figured out how to consistently swap meshes for the Arkham Aslyum cutscenes. However, there do seem to be some things that definitely needs to happen for it to work.

Now you can apply that mesh code over someone such as Red Hood: 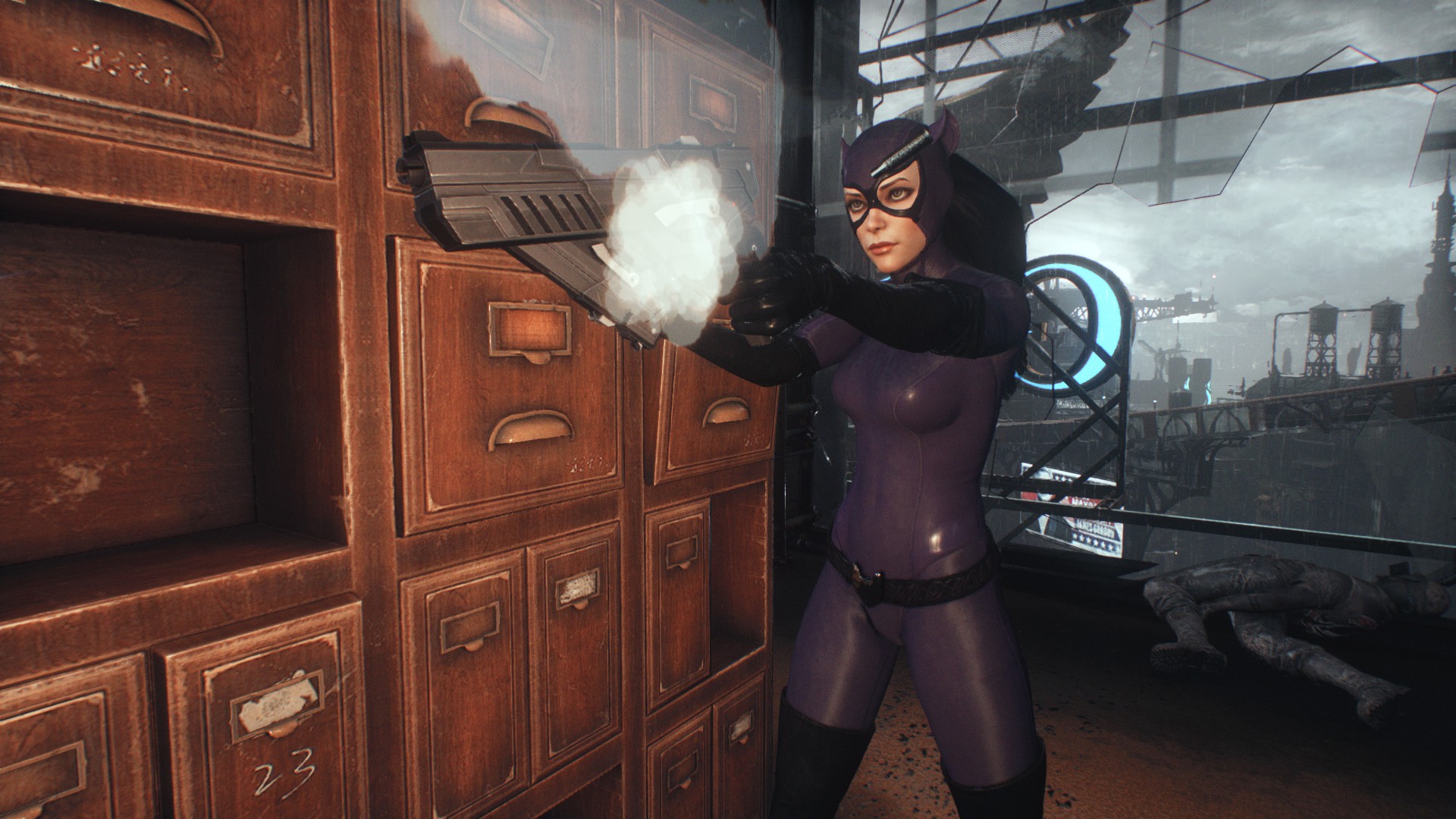 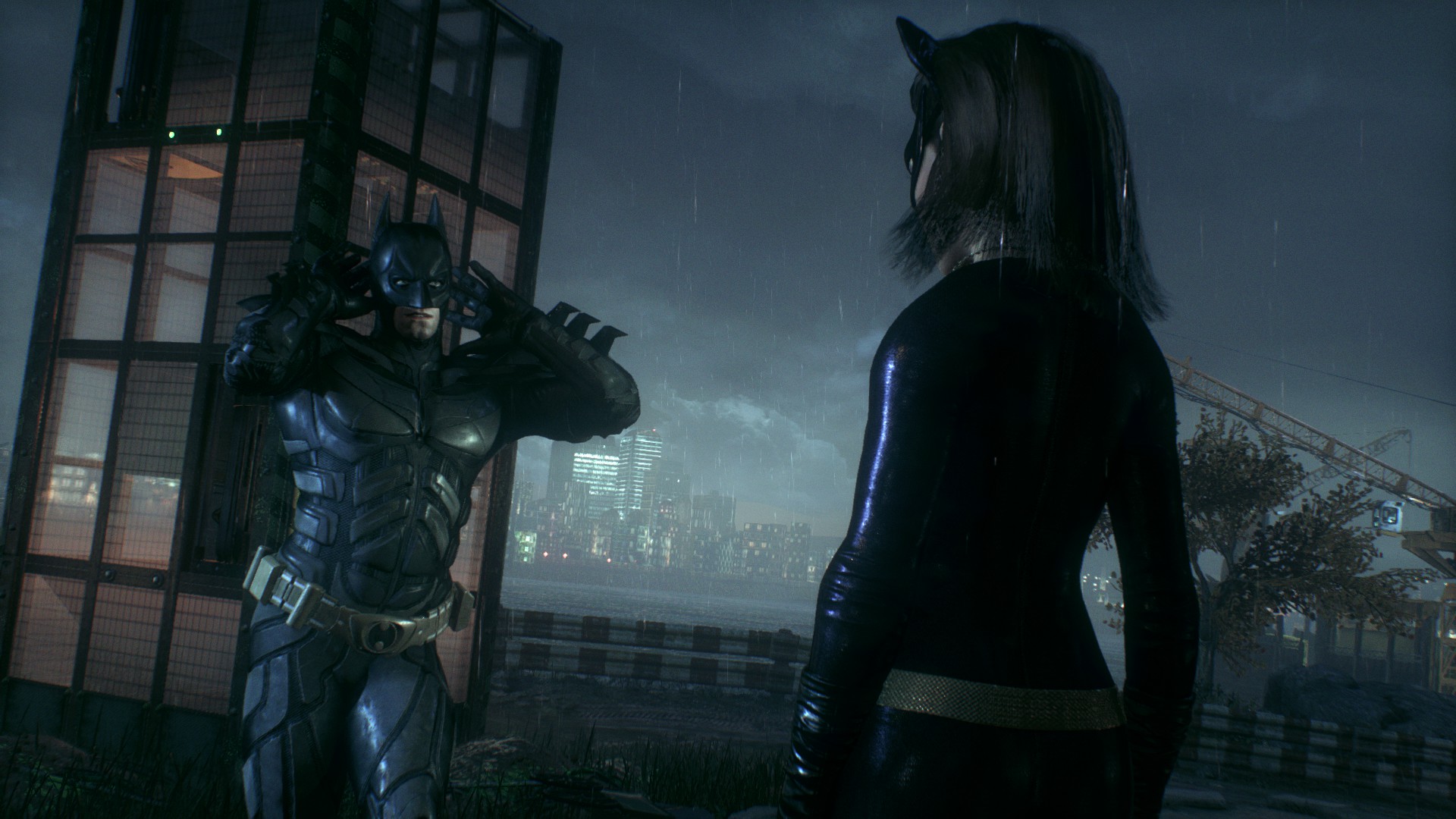 It's possible to get the same results of mesh swapping without running any console commands. It's also possible to swap Catwoman, Nightwing and Robin's skins in the main campaign with that of another character's (e.g. swapping Catwoman's skin with Batman). To do this, download the following file:

To install, extract the PLAYABLECHARSBATMAN folder to Batman Arkham Knight\DLC\[Whatever DLC number you want]. From there, you can go to the character showcase and choose your skin.
Screenshots and Videos
Here are some screenshots showcasing various mesh swapping and character swapping mods: 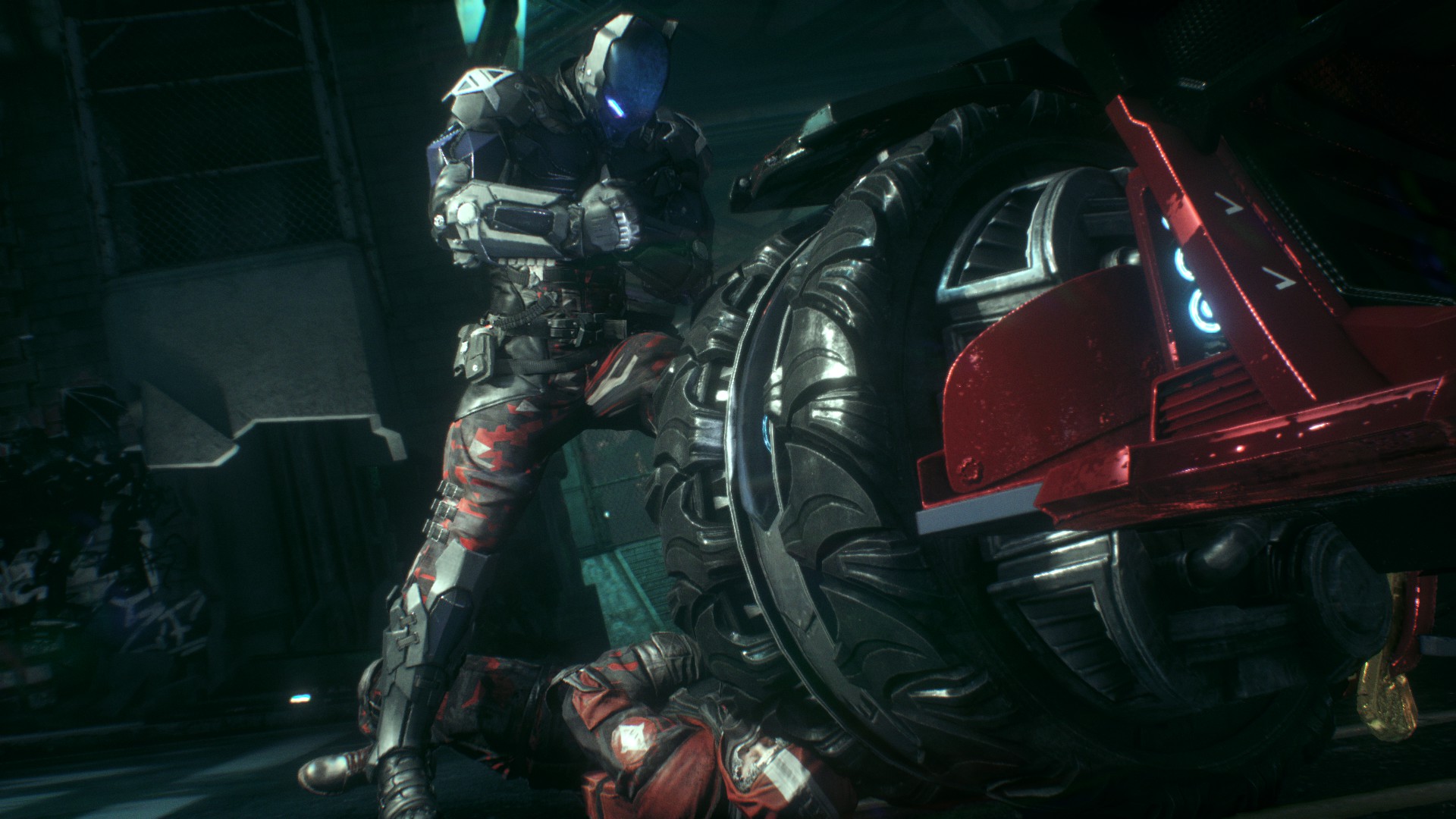 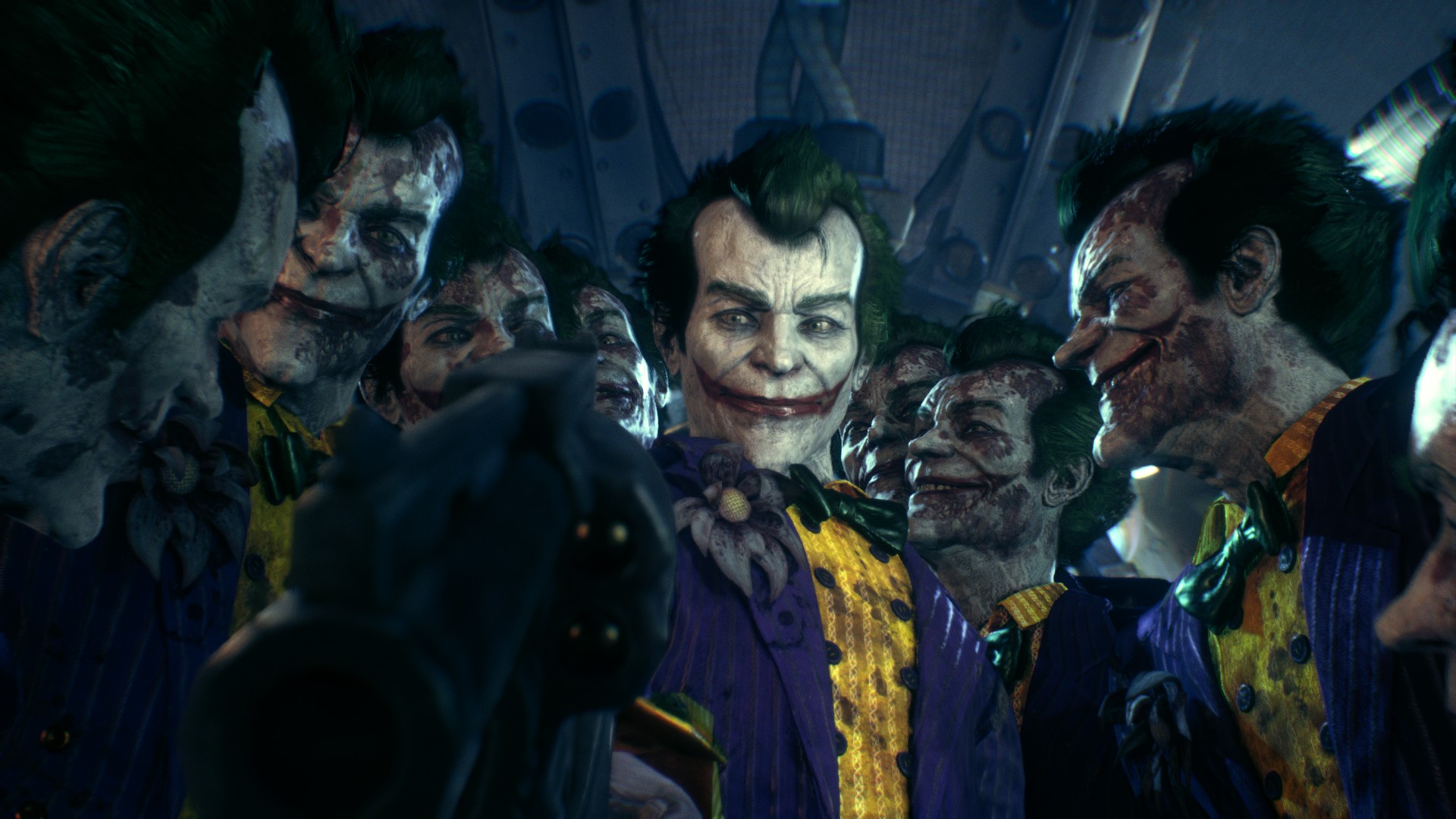 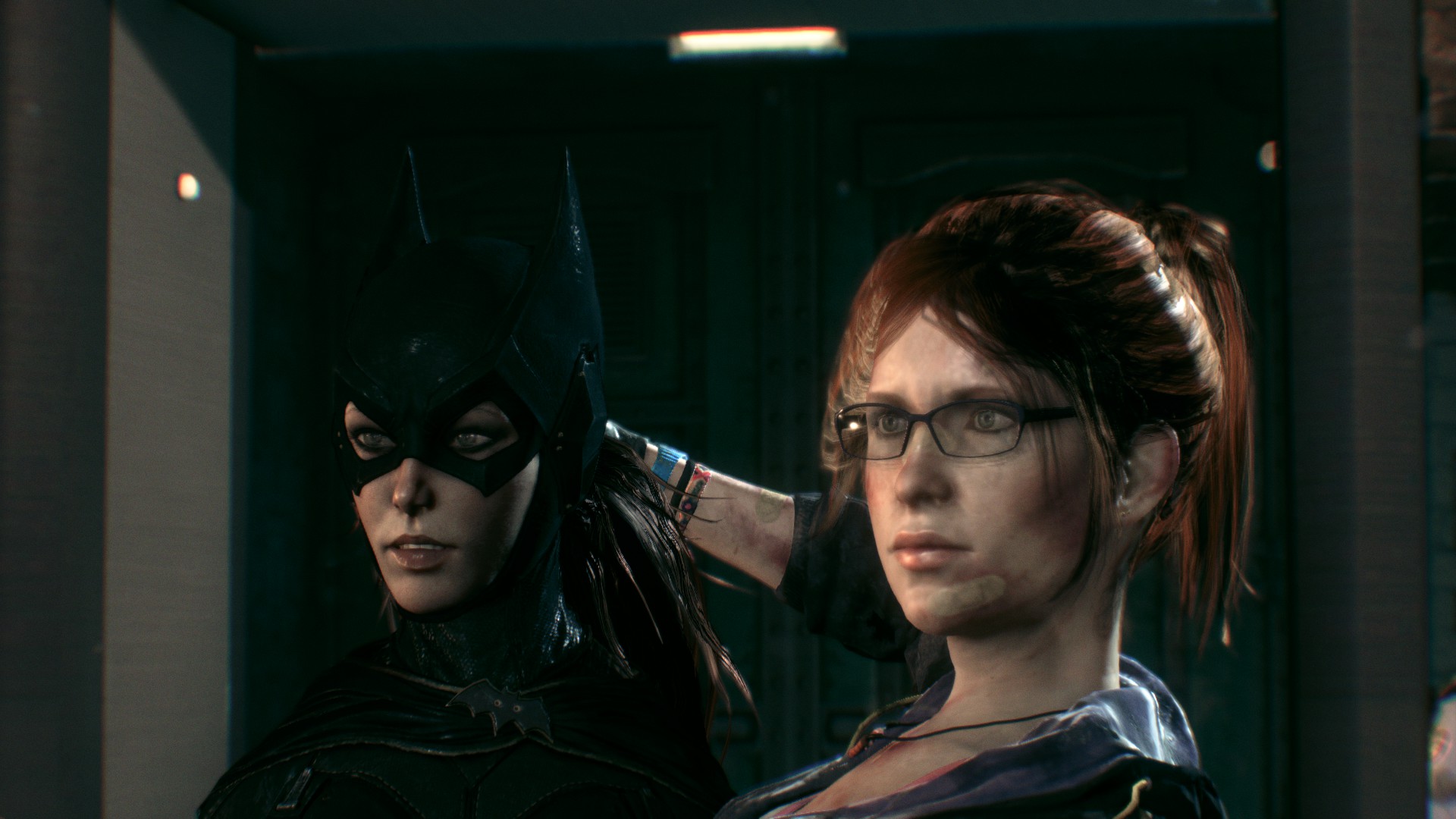 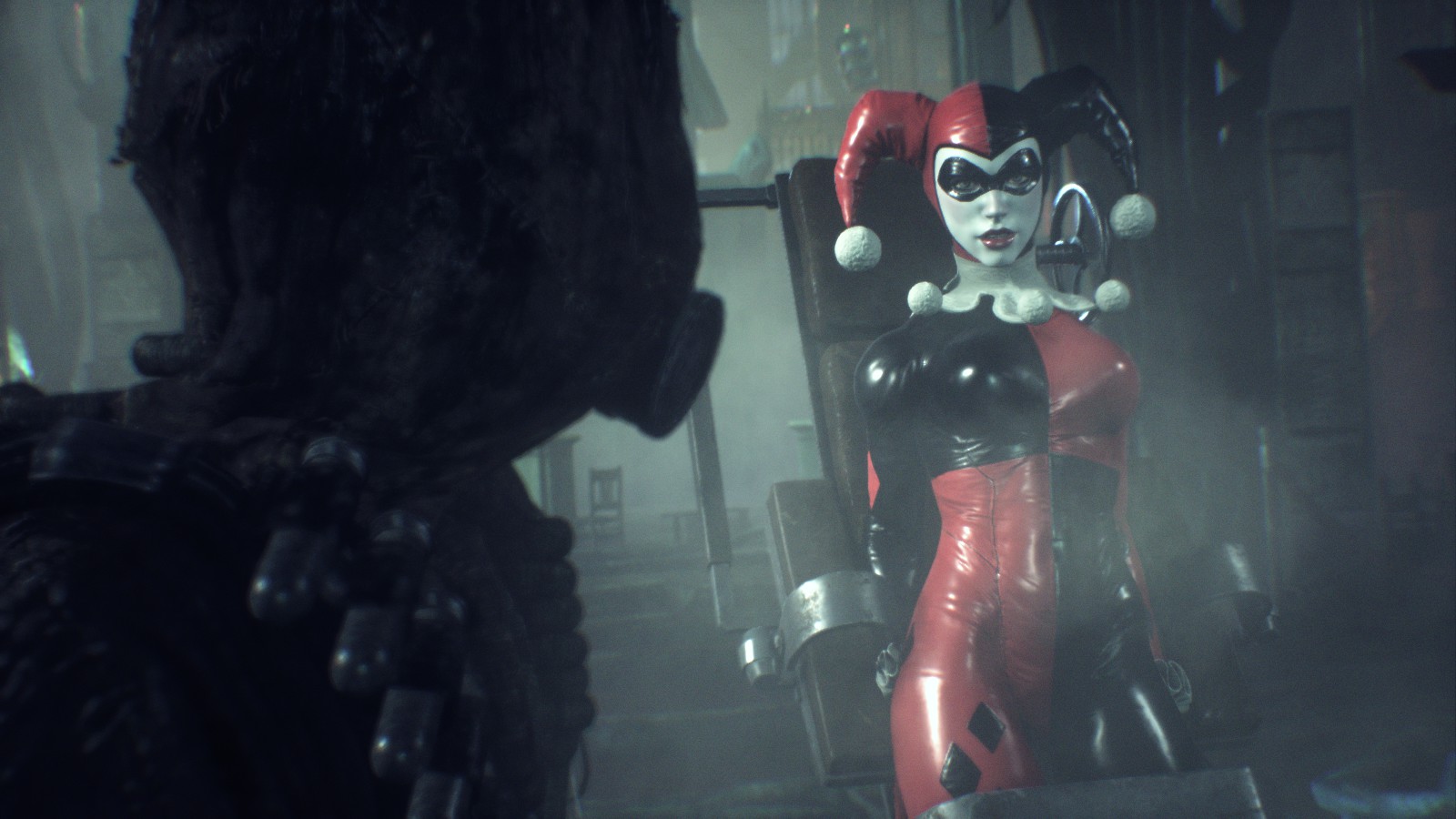 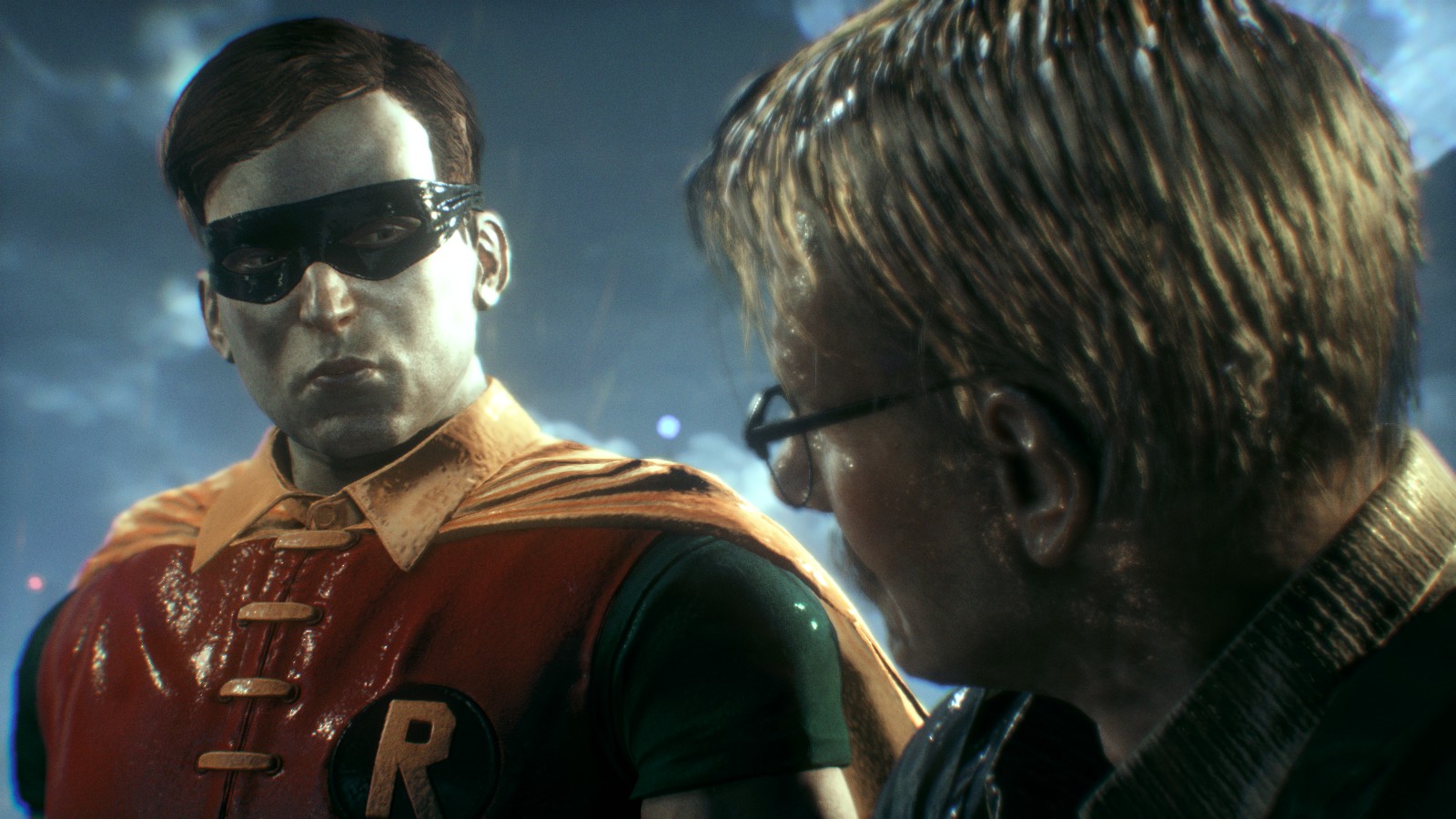 Here are some more videos I created:

ZeroAssassin23 Apr 21 @ 7:16am
How do i just change the cape for batman so that it loads in another suits cape, i have the console.txt in binaries with the correct code as well as the BM file in where ive been shown to put it, but no matter how much i mash the key it wont spawn batman in with the other cape.

sn0wsh00  [author] Apr 14 @ 3:23pm
@sulcria Yes, I think that's why Azrael's hood does not appear. I would imagine LoadPC Playable_Azrael would work, but be aware that some triggers may not work.

sulcria Apr 14 @ 10:31am
Hi, is it because of the ExtraMeshes attributes that in the mod PLAYABLECHARSBATMAN, Azrael hood do not appear when playing batman ? To fix it, should I need to first "LoadPC Playable_Azrael" ? (I tryed but it didnt work, so before trying harder I wanted to ask)

ZeroAssassin23 Apr 8 @ 5:09am
im so confused i just wanna swap capes for certain suits (or just swap capes in general)

Luciant Lux Apr 1 @ 9:11pm
Did everything and the meshes are coming out nicely but my character is stuck in a t-pose and can't move. Any advice?

DiGiTALBURN Feb 23 @ 6:42pm
Why would you ever play a BATMAN game as anyone other than, BATMAN! Morons.