Store Page
Garry's Mod>  Workshop > c4sual's Workshop
This item has been removed from the community because it violates Steam Community & Content Guidelines. It is only visible to you. If you believe your item has been removed by mistake, please contact Steam Support.
This item is incompatible with Garry's Mod. Please see the instructions page for reasons why this item might not work within Garry's Mod.
Current visibility: Hidden
This item will only be visible to you, admins, and anyone marked as a creator.
Current visibility: Friends-only
This item will only be visible in searches to you, your friends, and admins. 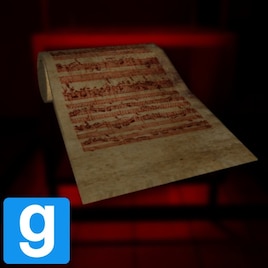 c4sual
Offline
See all 5186 collections (some may be hidden)

This item has been added to your Subscriptions. Some games will require you to relaunch them before the item will be downloaded.
Description
THIS ADDON IS OUTDATED AND ABANDONED. I MAY RETURN TO IT IN THE FUTURE

Special Containment Procedures: SCP-012 is to be kept in a darkened room at all times. If the object is exposed to light or seen by personnel using a light frequency other than infrared, remove personnel for mental health screening and immediate physical. Object is to be encased in an iron-shielded box, suspended from the ceiling with a minimum clearance of 2.5 m (8 ft) from the floor, walls, and any openings.

Description: SCP-012 was retrieved by Archaeologist K.M. Sandoval during the excavation of a northern Italian tomb destroyed in a recent storm. The object, a piece of handwritten musical score entitled "On Mount Golgotha", part of a larger set of sheet music, appears to be incomplete. The red/black ink, first thought to be some form of berry or natural dye ink, was later found to be human blood from multiple subjects. The first personnel to locate the sheet (Site 19 Special Salvage) had two (2) members descend into insanity, attempting to use their own blood to finish the composition, ultimately resulting in massive blood loss and internal trauma.

Following initial investigations, multiple test subjects were allowed access to the score. In every case, the subjects mutilated themselves in order to use their own blood to finish the piece, resulting in subsequent symptoms of psychosis and massive trauma. Those subjects who managed to finish a section of the piece immediately committed suicide, declaring the piece to be "impossible to complete". Attempts to perform the music have resulted in a disagreeable cacophony, with each instrumental part having no correlation or harmony with the other instruments.

If you approach SCP-012, your camera will be forced to look at it and you will be losing 3hp every second. When you leave SCP-012 red zone your character will start speaking and want to come back to object. Works very well with Breach Gamemode and can add a nice ambient object to the game.

tuxedo155 Dec 30, 2018 @ 6:11pm
nice job on this did i also mention that i didnt know what scp was when i got this mod i just downloaded it because i wondered what scp was so ya but great mod keep up the good work

summus artifex Aug 1, 2018 @ 2:01pm
actually read it fully and wish for the original creator of the post to stay alive and don't repost it. maybe it will come true and our wish will be fulfilled and the opposite will happen :P