Store Page
Garry's Mod >  Workshop > DrVrej's Workshop
This item has been removed from the community because it violates Steam Community & Content Guidelines. It is only visible to you. If you believe your item has been removed by mistake, please contact Steam Support.
This item is incompatible with Garry's Mod. Please see the instructions page for reasons why this item might not work within Garry's Mod.
Current visibility: Hidden
This item will only be visible to you, admins, and anyone marked as a creator.
Current visibility: Friends-only
This item will only be visible in searches to you, your friends, and admins. 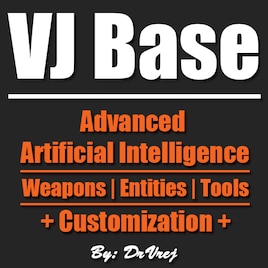 This item has been added to your Subscriptions. Some games will require you to relaunch them before the item will be downloaded.
In 3 collections by DrVrej
DrVrej's Garry's Mod Addons

882 items
Description
VJ Base, short for Vrej Base, was originally created in 2012. Its purpose is to assist the creation of many types of addons. It is popularly used for creating Scripted NPCs due to its highly customizable and advanced artificial intelligence systems. Check the feature list to get an idea of what the base does.
Version - v2.16.0c
Change Log - Releases Page[github.com]
Source - GitHub[github.com]

ADDONS
Official and unofficial community addons can be found: Here
* Made a VJ addon and want it listed in the collection? Let me know!
Want to make a addon with this base? Read this page.[github.com]

FEATURES
Features may differ between addons & not all features are listed!

COMMUNITY LINKS
Click on the icons to open the links!

Copyright © 2012-2022 by DrVrej, All rights reserved.
All trademarks are property of their respective owners.
No parts of the code may be reproduced, copied, modified or adapted, without the prior written consent of the author. Doing so would be violating Valve's Terms and Conditions.
Popular Discussions View All (335)

Hoodie 4 hours ago
So, I'm not sure what to do, the server I play on is on normal GMod, not x64 bit, the NPCs don't do anything. Is there a command in the vdf that might need to be adjusted on the server's part?

leevee 11 hours ago
how do i exet an ai i am controlling?

Atp Zombie 14 hours ago
why disable major features on x64 and chromium branches?
my version of gmod isnt even outdated

leevee 14 hours ago
the blood decals are broken for me. and alot of npcs have errors above their heads.